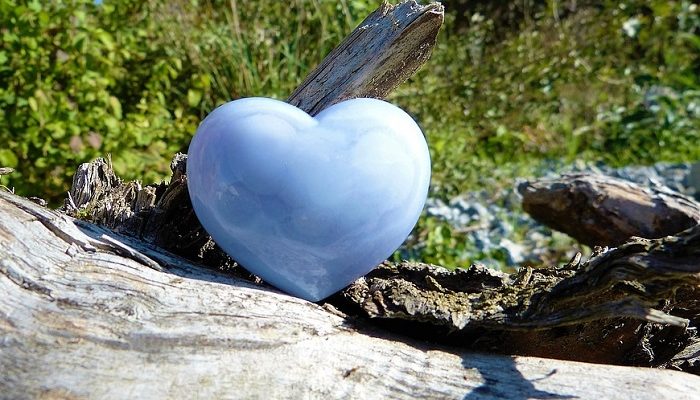 The effect of the healing stone chalcedony was already known in antiquity. The Greeks probably named the stone after the city of Chalcedon on the Bosporus. The incomparable beauty of Chalcedony * was also highly praised by the Tibetans, who compared it to the lotus flower. As a healing stone he should help with speech and provide satisfaction, optimism and strength.

The healing stone chalcedony is most often obtained in light blue tones with white and blue and white stripes. On the psyche he supports optimistic feelings of life. It makes you mentally flexible, so you can react more easily to change. As a bearer of chalcedony you will go through life carefree and with ease. This healing stone also protects you from troubled sleeping habits and nightmares.

He also supports a sense of serenity, calm and patience. If you find it particularly difficult to talk about worries or problems, the Chalcedony * helps you become more open and more confident.

Chalcedony is also known as the orator stone, which is why people who need to talk a lot get supportive vibrations with this stone. The healing stone also works well in children who suffer from speech disorders such as stuttering. He takes stage fright and inhibitions and also strengthens your assertiveness. Even against melancholy moods, the chalcedony can be used well.

The well-known and predominantly light blue gem Chalcedon bears its name only since the 13th century. Previously, this term contributed other, usually red, minerals. Where the term chalcedony comes from is not completely certain. Science suggests that the term refers either to the Greek city of Kalchedon on the Bosporus or to Carthage (Karchedon). Incidentally, in the tradition he also dives under other names, such. Beekite, Jasponyx, Jenzschit, Lutecin, Massik, Quarzin or sapphire.

But above all in the popular tradition of the gemstone medicine one knows it under other names. Because of its ability to stimulate lactation in nursing mothers, he is here, for example, affectionately called milk stone. But also as orator stone, rainbow chalcedony or rainbow agate you can often find it in the notebooks of midwives and herbalists.

The different color variants of chalcedony can be found in different places on earth. Known sites of the Chalcedon include Turkey and India, but also Russia and Brazil, as well as Sicily and Tyrol. The name of the gem can be derived from the ancient port city of Chalcedon, which today is a quarter of the Turkish metropolis of Istanbul.

In many ancient cultures, such as the Romans, Greeks, Assyrians and Babylonians, the chalcedony was much appreciated. Archaeological findings showed that the gemstone was very common in the Bronze Age, especially around the Mediterranean.

The Native Americans also used the chalcedony in their tribal life. The gem was considered a sacred stone and was used in religious ceremonies to strengthen the bond between the individual tribes. The scholars Hildegard von Bingen also mentioned the chalcedony and suggested that it should be worn directly on the skin.

The stone is certified a diverse healing effect. It should act directly on the skin or lie under the pillow at night. There he protects against nightmares and sleep disorders. Especially in the connection with a rock crystal he should warm and be beneficial to the body. It should not be used in conjunction with an azurite because it is similarly strong. 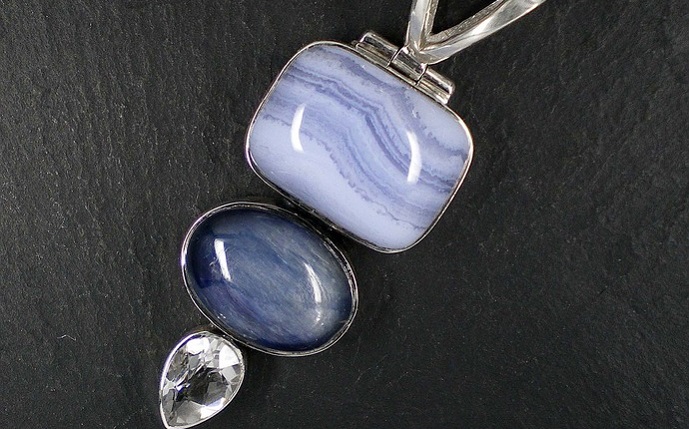 The stone helps with problems with the lungs as well as the throat and throat area. He is sometimes called “Smooth stone” because he gives a soothing and strong voice. Infections and inflammations fade faster when accompanied by such a stone.

Its positive effect on hormones and mammary glands also makes it known. It is used for weather sensitivity and eye disorders, affects the thyroid gland and also against varicose veins. The formation of red blood cells is positively influenced and it stimulates lymphatic activity. He likes people with high blood pressure, because he not only helps, but also has a cooling effect, which affects the affected as pleasant.

The semiprecious stone represents the neck chakra, but it can also penetrate into the third eye when it occurs in conjunction with the amethyst. In addition, he supports twin-born, promotes the purity of the heart in cancer-born and the serenity in Sagittarius.

But it can also be used by all other zodiac signs. He accompanies the general, also mental disturbances during the menopause pleasantly. He also helps against nervousness and stuttering. Against the latter, he is also used in children, which is easily possible because there are no side effects.

The effect of chalcedony was already known; therefore gems were carved out of it, which then stood for wealth and beauty. The Tibetans compared the stone with the beauty of a lotus flower. He should take weakness, melancholy and dissatisfaction from the man to whom he belongs. The stone acts on the mental mobility and provides better response to change. It gives a positive attitude to life and gives composure. That’s why he also helps against inhibitions and stage fright.

The semi-precious stone chalcedony is valued above all in the jewelry industry. Cameos and seal stones are made of it, as well as any other kind of jewelry. In addition, utensils that are also found among antiques and prove that this type of use was previously common. Large copies are or were used in architecture, for tabletops and much more. Chalcedony is also very suitable for engraving.

In addition, the stone should be beneficial if the healing water is drunk, which is made with the stone. The chalcedony is often used as a healing stone and can also fulfill this feature if it is worn as a pendant on the chain.

The chalcedony stone affects your love life in a way that it allows you to open up more and accept the positive energies of others.

This beautiful and strong stone is going to allow you to change your life, but only if you let it do so.

Its healing effects and/or indications cover a broad spectrum. Basically, he is used on all topics that have something to do with communication. Here he promotes understanding, openness and sociability. But it is not only used for communication in the outside, but also for learning how to engage in honest and creative dialogue with oneself. He strengthens the rhetoric and self-expression and is often used as a power stone, especially in grief and annoyance.

He also shows a strengthening effect in overcoming unconscious mechanisms and habits. And it helps to bring the degree migration between demarcation and helpfulness in a solid balance.

Another of his excellent healing effects is to compensate for lack of flexibility, lack of assertiveness or fear of perseverance. And that, without neglecting the problem of aggression, irritability or load limits.

On a physical level, chalcedony is used in respiratory diseases, especially lung diseases or the diseases related to smoking. It supports the internal glands in their secretion and is even used as a balancing stone at an early stage of diabetes.

Also, it is often used as an anti-inflammatory and to strengthen the immune and the regeneration system of the body. He also helps to the blood clotting. It has a special effect on fungal infections in the female reproductive organs and other problems in the area of ​​the mucous membranes are solved in a gentle way by the healing power of its energetic oscillation field.

The healing stone chalcedony is one of the stones that can be safely worn over a longer period and without interruption. Its effect unfolds through direct skin contact and spreads best through targeted placement on the affected area.

However, since this is usually not feasible in practice, it can of course also be attached with a mild skin patch. Here you can also choose places that disappear under your clothes. If in doubt, the energy of a healing stone always finds a way to develop exactly where it is really needed!

The Blue Chalcedony stone is a powerful stone that can motivate you to see the world as full of possibilities and not as black or white. This will allow you to be confident much more and to go on an adventure when there is an opportunity to do so.

The Blue Chalcedony stone is linked to the Zodiac sign Aquarius. This stone boosts their natural creativity and gives them motivation to push harder.

How to Purify Blue Chalcedony Stone

Chalcedony tumbled stones should be cleaned and discharged every four weeks under running, lukewarm water. The charge is done via rhinestones. Chalcedony chains are unloaded overnight with hematite.

The blue chalcedony increases the attention and inner peace. Inhibitions and also trepidation can be solved better, self-confidence and rhetoric are strengthened. The assertiveness also improves; changes in the situation can also be better reacted. The blue chalcedony also protects against sleep disorders, nightmares and melancholy.

The semi-precious stone chalcedony is valued above all in the jewelry industry. Cameos and seal stones are made of it, as well as any other kind of jewelry. In addition, utensils that are also found among antiques and prove that this type of use was previously common. Always carry it on yourself or somewhere convenient to get the best effect out of it.