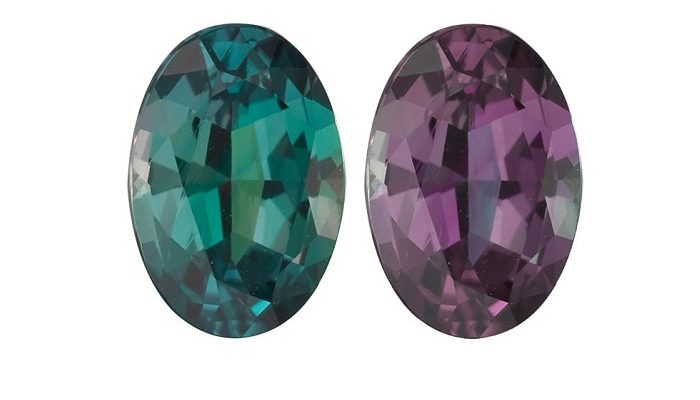 The name of this stone goes back to the Russian tsar Alexander II (1818-1881), to whose favorite stones he owned. It is particularly interesting in that it appears green in daylight and purple in artificial light. That is why he is said to be an emerald by day and an amethyst in the evening. This interesting phenomenon results from absorption of some colors of the light spectrum.

Alexandrite cat’s eyes are also known. Alexandrite is tertiary in chromium-containing gemstone. It forms during the metamorphosis in the contact zone of two rocks, one of which supplies the minerals aluminum and beryllium, the other the necessary chromium. Due to the rarity of these conditions, alexandrite remains a rare mineral.

Beautiful pale yellow, perfectly transparent crystals are e.g. at Alaotra lake in Madagascar and very dark alexandrite crystals up to 2 cm in size in Zimbabwe. The most famous European site is in Marsíkov near Sobotín in Moravia.

The largest and most beautiful group of alexandrite crystals was found in the Urals. It is a druse with 22 crystals and a weight of 5 kg. Alexandrite forms diamond-shaped rhombic crystals and penetrations, the crystals of which intersect exactly at an angle of 60 °. Single crystals and triplets are always grown in the mica slate.

Since Alexandrite is an expensive gemstone, there are quite a few fakes on the market. Above all, polished stones are often imitated by synthetic corundum (sapphire), synthetic spinel or doublets of glass and garnet. Even synthetic alexandrite itself is on the market. The distinction is possible in all cases only by mineralogical-gemological investigations.

The Alexandrite owes its name to Count Perowskij who named this marvelous gem in honor of the future Russian tsar Alexander II (1818-1881), to whom he was given on the day of his sixteenth birthday. Russian Alexandrite is certainly the most famous, but it is no longer available on the market. Sri Lanka has long been, together with Russia, the main source of Alexandrite extraction. Wonderful specimens were also produced in India, Tanzania and Brazil. Small quantities come from Burma, Madagascar, Mozambique and Zimbabwe.

Extremely rare, the Alexandrite was discovered for the first time in the mid-nineteenth century and soon became the backbone of the Soviet jewelry industry. Unfortunately, the original Russian source is exhausted and the only link with its homeland is now given exclusively by its name.

Next to the iridescence, of which we have spoken previously, the Alexandrite exhibits a further optical effect: the tricroism, thanks to which the gem is able to show three different colors (green, red, yellow) depending on the angle of observation. As a type II gem the Alexandrite presents visible inclusions, especially in the specimens above a carat, which however do not interfere with its beauty.

A rare variety is the Alexandrite Eye of Cat, which, thanks to the thin needle-like inclusions of rutile, reflects the light producing an effect similar to a cat’s pupil. This effect is also called “Chatoyance” and is obtained with a cabochon cut (with a convex surface).

Do not be afraid of the big change. Take these and be surprised, but never go into the passivity, but always stay active. When writing a new story, be careful not to slip into old patterns again. Fate is well placed for you; you also fall to your feet again and again. Just react in different situations than you are used to (e.g. if your lover goes to football, then just go with him or surprise your sweetheart with a nice, romantic meal, even if she has never have made you one). 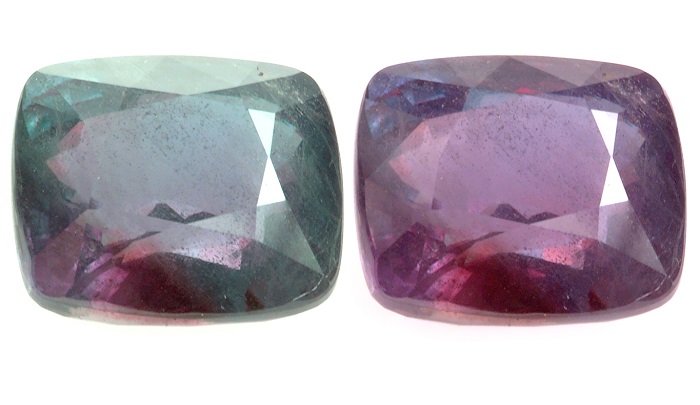 From a strictly mineralogical point of view, Alexandrite is a Crisoberillo belonging to the class of oxides and hydroxides, of which it is the most sought after variety thanks to its iridification. This peculiarity depends on two factors: the quality of the light source and the way in which it is absorbed and reflected by the chrome.

Natural light and artificial light (incandescent) have a different amount of spectrum colors (blue, green, orange, red, violet and yellow). Chromium absorbs yellow while white light passes through Alexandrite, doubling in equal parts of blue and green. Sunlight is more balanced, containing a greater amount of the green type preferred by our eye, so the Alexandrite appears green under candescent light, while under an incandescent light (which contains more red), its color turns to red.

Alexandrite is one of the rarest stones in the world. Fascinating and mysterious, there are several variations. One of the best known is the alexandrite cat’s eye, whose needle-like inclusions reflect light, similar to a cat’s pupil. It is a variety of crisoberillo. When it is illuminated with artificial light, it appears a beautiful red color. When it is illuminated by the natural one, it appears green to us.

Unfortunately, the ancient Alexandrian deposits in the Urals are exhausted. It is here that it was discovered in 1830, in an emerald mine.

It becomes increasingly difficult to find it on the market, but it is not uncommon to find imitations. Needless to say that in jewelry it is particularly loved but, even from the field of crystal therapy is not certainly excluded this beautiful stone. Costing a lot, many people prefer to look elsewhere for the therapeutic field.

The Alexandrite stone affects your relationship in way that you can now more clearly see who is truly there for you and who is not.

This powerful stone gives you a better insight in the situation and allows you to enjoy your life to the fullest.

This stone was unknown before 1830. The name was given to him in honor of Tsar Alexander II, and was discovered on his birthday. It is considered a fascinating and mysterious gemstone, with many properties. Let’s see the most important.

Balance: alexandrite helps you find your personal balance, both in the heart and in the spirit. It teaches you to evaluate things better, without taking extreme positions. This also allows you to analyze the roads ahead of you and when needed, reverse your steps in a new direction.

Happiness: attracts happiness and success. Understood as a form of personal realization that goes beyond money. Everyone has their own idea of personal fulfillment. Alexandrite helps you to achieve your goals.

Self-esteem: a very important ingredient to succeed, in any area. Wear it constantly to increase your confidence in your skills. Regenerate: this beautiful stone is regenerating; it gives you a lot of positive energy that helps you to see everything with much more positive eyes. A precious amulet that gives you the strength to overturn your life, where you do not feel happier and more fulfilled.

Creativity: considered a stone capable of attracting creativity, wear it if you have embarked on an artistic journey or want to create something new! It protects: if you feel vulnerable and targeted, it not only protects you, but also helps you work on you, your self-esteem and the ability to stand up for yourself.

On the other hand, on the physical level, it can be used for problems concerning the pancreas, lymph nodes, and the spleen.

The next big advantage of the tumbled stone as a healing stone is its price. Since the tumbled stone, in the production, requires only very little manpower, it is in stone science the ideal healing stone. Alexandrite, which is used in stone healing, must never be colored, irradiated or reconstructed! High-quality alexandrite (sapphire), which is perfectly suitable for use in stone therapy, can be found in our shop.

Alexandrite is regarded as a symbol of loyalty and should decisively promote our thirst for knowledge, the desire for prudence and bring order into some mental chaos. The effect of alexandrite on the mental level is rather weak, and some of the effect may be due to the psyche of the user and the fact that the alexandrite is a stone with a very long past and also a very expensive gemstone.

Especially with the topic of thoughts chaos the alexandrite has to be worn over a longer period of time (several weeks) in order to be able to unfold its effect.

The alexandrite cannot be found in meditation or in stone circles, with a few exceptions. Alexandrite has its price. Therefore, there are more suitable and above all cheaper stones for the meditation, or for the stone circle than the alexandrite. And fake alexandrite would have no effect anyway. However, if true alexandrite is at hand, there is nothing wrong with experimenting with the stone.

Money: if what you are looking for is attracting a little money, the alexandrite is a stone that can help you direct your life towards some more remunerative work.

It brings you luck when searching in the field you like!

However, planet stones also increasingly find access to Western horoscopes. Whereby the origin of the “cultivated” planet stones practically always originates in the Jyotish (Indian Horoscope). The interpretation of the planet stones is on the one hand millennia old and still very little common in the western world. Accordingly, it is difficult to find reputable sources.

The gemstone is assigned to the month of September as a birthstone or stone. The gem is designed to give those born in September an understanding of others and a clear vision of justice. In addition, the gem should give the September born a general satisfaction. Note: The birthstone as well as the stone of the month is not identical to the assignment to the signs of the zodiac. Month stone and birthstone are assigned to the birth month.

He also helps with inflammation, liver inertia, gastric oozing, stomach hyperacidity, mint conditions and poisoning. He should also help with nervous disorders and sensory disorders. Alexandrite is to be worn as a precaution stone and a healing stone against leukemia.

How to Purify Alexandrite Stone

Alexandrite may be subjected to a steam cleaning treatment, but not to ultrasound. For unloading and cleaning the stone lukewarm water can be used or you can put it in the sea salt. To charge the alexandrite should be placed in the sun for a short time. Another peculiarity of alexandrite is that it can be positively charged electrically by rubbing.

For best results, it is best applied on the eyebrows, in the area of the liver or directly on the affected area. Very good, too, to look at the healing stone meditatively.

The Alexandrite stone is a powerful stone that can truly affect your life in a positive way. This stone gives you a much clearer view of the situation and allows you to see the world as it truly is.

This stone should be worn around the neck and close to heart in order to truly get the best out of it.