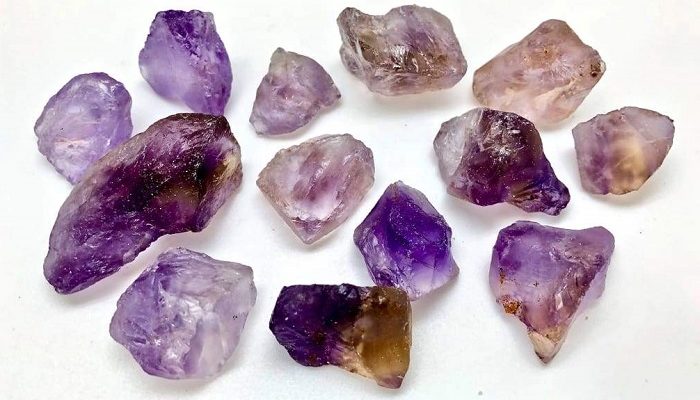 Ametrine quartz is a very special stone, because it is born from the union of amethyst and citrine. The masculine / feminine energy of these two stones is very powerful even when they are simply juxtaposed, let alone when they are joined together within the same identical stone!

Both are two stones with a trigonal crystal system and certainly the ametrine could only be a trigonal! It must be said that it is still a very rare stone (it is often an imitation, the amethyst is subjected to a heat treatment and a part begins to take on a yellow color) and very expensive.

So open eyes when you decide to buy it! The Ametrine in a crystal therapy session is mainly used as an amplifier.

It therefore manages to enhance the effects of all other crystals. It acts on the aura, removing blockages and negativity that prevent you from following your own path.

Half of it is amethyst, let’s not forget it! In fact, purple quartz is an extraordinary ally when it comes to removing fixed and harmful habits (it can be smoking, drinking too much alcohol, but also simply too much food or too much coffee, not to mention emotional addictions!).

This variety of quartz is widely used by crystal therapists because, as I said before, they work a bit like amplifiers (like rock crystal!) And help to loosen blocks. Let’s see what the properties are on a physical, mental and spiritual level. The ametrine is a very useful stone for those who are trying to lose a few pounds.

As I said before, it helps to overcome addictions, helps against headaches and acts as a regenerator after intense physical effort. It stimulates the mind to be more active and attentive to what is happening around. It helps to purify the body cells that make up tissues, organs etc.

It is a very suitable stone for working on a spiritual level. I especially recommend using it during meditation. The ideal is to dedicate at least 30 minutes to meditation every day for a month, using this stone. It helps you to regenerate yourself, give you clarity in your goals and above all to establish a very powerful relationship with your spiritual sphere. It will help you achieve the desired success!

This is the most fascinating aspect of the ametrine! I love both the citrine quartz and the amethyst. Using it in meditation helps to balance the masculine and feminine energies, the energetic vibration leads to the connection between the solar plexus and that of the crown. Translated, you will no longer have to live either in the material realm or in the spiritual one, but you can do both at the same time, infusing spirituality into everything you do day after day.

All the “dual” stones are valid allies because they help to achieve balance. Many stones are used together to provide this effect, as is the case with sunstone and moonstone, others, like the ametrine, fuse two stones together, thus allowing a much more targeted work. You can use the ametrine to balance the male and female energies in the body.

Just keep this stone in your hands during meditation practice. You can wear the ametrine if you need to work on your mind and interrupt the inner dialogue that prevents you from living your days properly. 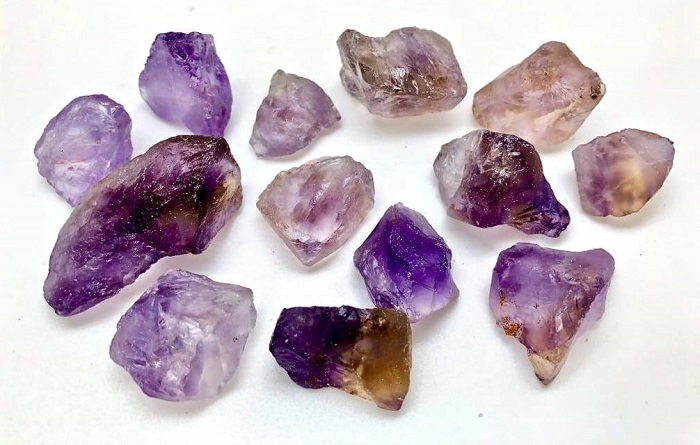 Ametrine is historically of little importance due to the few occurrences. There are traditions that he was considered unclean amethyst and has been defined as a separate stone only in the course of time or in the recent past.

Ametrine, being a mixture of amethyst and citrine, is not assigned to any planet. The ametrine is therefore virtually unnoticed as a planetary stone.

Planet stones are also increasingly finding access to Western horoscopes. Where the origin of the “groomed” planet stones practically always comes in the Jyotish (Indian horoscope). The interpretation of the planet stones is on the one hand millennia old and still very little common in the western world. Accordingly, it is difficult to find reputable sources.

By chance, this very rare and coveted quartz was created from two gemstones. It consists of purple amethyst and the golden yellow citrine, which also gives the name. It is found exclusively and only in a few places in South America.

The Ametrin has a particularly relaxing effect on the soul and on the feeling life and brings them back into a harmonious balance. Wishes and needs are better coordinated and contradictions filed. In this way, the ametrine causes serenity and inner peace, awakens zest for life and can help with nervousness or listlessness.

Even demands can be dealt with better with his help, because it helps to optimistic thinking and gives creativity.

The color of these stones is unusually rich, therefore their costs are significantly higher than those delivered to the world market of Brazil. It is noteworthy that the deposition of ametrine in other countries has not been found today, although amethysts and citrines are broken around the world.

Because its reserves on the planet are limited, Researchers suggest that its mining will last for another no more than two or three decades. It is noteworthy that the amethyst was presented to the public only in 1980, so most people who have never heard of ametrine are surprised to see this unusual two-color stone.

One of the most common legends about the emergence of Ametrine is associated with the story of the Spanish conquistadores fond love Don Felipe de Urriola and Goi-tia and the local Indian princess Aureiros. On the bed of death, the princess presented him with a two-colored Ametrine, which the Indians used to appeal to the gods, so that they would calm the tribal warriors.

The Spanish, who buried his wife, returned to his homeland and presented an unusual stone as a gift to his queen, which made him the greatest asset in his daily toilet.

The ametrine is aimed at all those much stressed people, who are constantly searching for a little inner balance. It allows you to work on yourself, your weaknesses and above all, dependencies.

Ametrine is a combination of amethyst and citrine. He was known only to the nomadic peoples of South America, where he was not given too much importance, as the ametrine is in the heart of very ugly and rough amethyst quartz crystals.

Since there are only a few references of the coveted Ametrine, this is one of the rare and precious gemstones. It is available as a rough stone, crystal, carver, ball, chain, and pendant and as a faceted gemstone. Its color ranges from golden-violet translucent to yellow to brownish.

Ametrine is formed primarily hydrothermally from weak iron-containing silicic acid solution of magmatic origin. In part, the low iron content replaces the existing silicon in the crystal lattice. Its violet color content is created by ionizing, i.e. radioactive radiation from its surrounding rock. This radiation puts the existing iron in the quartz into the tetravalent oxidation state. Locations: Rio Grande do Sul, Brazil and Anay, Bolivia

As two different souls dwell in Ametrin himself, “this also tames our many souls”. He works against stress, nervousness, depression. Since the ametrine is half amethyst and half citrine, it has a particularly gentle effect on our soul. He serves as a faithful companion in everyday life and gives us more harmony. The Ametrin helps to connect apparent opposites and leads to thoughtful, safe action.

It promotes optimism and zest for life, creativity and inner well-being, which is not driven away by external stress. He promotes control over one’s own life.

He stimulates the oxygen supply. The Ametrin dissolves blockages in the mental, mental, emotional and auric body, so that it can solve tensions and everything can work properly again. He supports the activity of the autonomic nervous system. Ametrine is used for nervous indigestion. It promotes the cleansing and regeneration of all cells and tissue.

Relieve tension caused by excessive thinking. Interrupt the obsessive inner dialogue to bring peace. Improves will, relieves anxiety, stress and depression. Just like citrine, it makes you more creative. After all, the ametrine is closely related to the seventh chakra.

Ametrine is a powerful stone talisman who helps solve conflicts and teaches the owner to accept events that occur with understanding. People who wear it every day, capture and perceive much more information, so it is ideal as a talisman for students or people working in the media.

Especially the scale too ordered but of course also usable from all other signs of the zodiac.

However, it should be used for meditation only to the extent of experienced people with a lot of meditation experience, as it greatly stimulates concentration and intuition, and can discard the inner calm in inexperienced and too intensive application.

How to Purify Ametrine Stone

After unloading, the ametrine should ideally be loaded in an amethyst crystal group or druse.

Ametrine forms a very sensitive partnership with silver or gold. Therefore, many people like to use him in connection with these precious metals in order for the Ametrin to develop and release its pure powers.

In order to develop its effect optimally, it should be worn on the body for a longer period of time or placed on the solar plexus area in the morning and in the evening. In case of nervousness holding in the hand is very helpful.

Ametrin is a wonderful yellow-purple stone, combining the properties of two minerals simultaneously – citrine and amethyst. In addition to the natural beauty, it carries wisdom and harmony with the world, so you can learn to relate to the flow of life with understanding.

This crystal is ideal for non-standardized personalities who are not used to staying there and constantly trying to learn something new. Ametrine Stone with its chemical compound silica. It is a translucent semi-precious stone, which is in fact one of the polychrome grades of crystalline quartz.

Due to the fact that two stones are combined in Ametrine at one time, he got a rather rare, non-standard color.

The cost of classic Ametrine is one of the most high. In such stones there is a clear boundary between the flowers. But usually this purple stone plays in the sun with all the shades of gold color.

It is therefore, when cutting quartz for further processing, that only a part of the resulting stones becomes Ametrine, while the rest becomes common citrines, amethysts or simply colorless quartz.

Keep in mind that if you are offered to buy a saturated color stone with a clear distinction, it means that you are likely to offer a synthetic copy.

The color of these stones is unusually rich, therefore their costs are significantly higher than those delivered to the world market of Brazil. It is noteworthy that the deposition of Ametrine in other countries has not been found today, although amethysts and citrines are broken around the world.