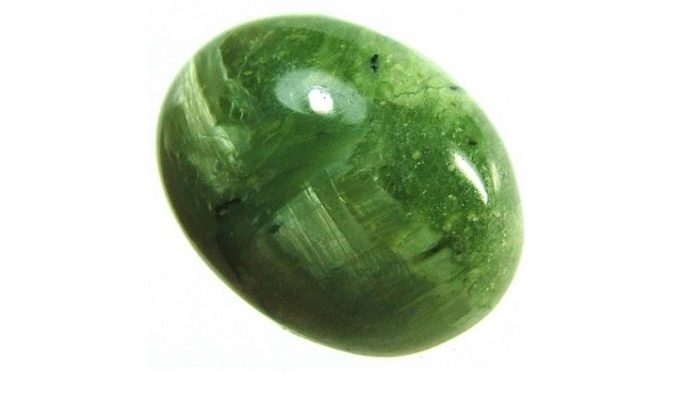 The Opal has a great importance as a gem – because of its colorful play of colors, which is often blue-green. The name should be borrowed from the Latin “opalus”, which stands for “precious stone”.

Another variant is that the name Opal comes from the Greek “opallios”, which means something like “color change”. In ancient times, the opals had a great importance, and they were rated even higher than diamonds. Of particular importance are the so-called noble opals, which can boast a particularly lively and opalescent play of colors. They are especially popular in the jewelry industry.

The fire opals are from Mexico; they are also counted among the noble opals, although the typical color play is missing. They have a uniform, transparent color. Bright opals are sometimes called “white opals”.

Occurrence of the stone is not at all so rare – at present over 3000 find places worldwide are known. But Australia is the undisputed number one. About 95% of all opals come from here, while about 4% comes from Mexico and the rest of the world divides into the remaining percentage. In Germany there is an occurrence at Eibenstock in Saxony, which produces the so-called “Eibenstock Opals”. Opals have also been found in Styria.

Other occurrences exist in Indonesia and New Zealand, Zambia and Ethiopia, Mexico and Brazil, and Peru. Opal has also been found in Kazakhstan and Turkey. Probably in Roman times opals were mined in Slovakia. From there comes the largest find in Europe: an almost 600 gram opal, which can be seen since 1672 in the imperial treasury in Vienna. France, Iceland and the Czech Republic are other mining areas in Europe. As NASA announced in 2008, large areas of Opal are suspected on Mars.

For the first time an opal was discovered in 1849 in Australia by accident. It was not until 1890 that mining started to a greater extent. The opal arises from fluid accumulations, which are siliceous.

These settle in various rocks, such as Tuff. But this can also be in organic material, where then, for example, the wood opal arises. Mostly the opal is accompanied by chalcedony. The water content of the opal evaporates, causing the silica gel to form a solid consistency. However, a small part of the water remains in the rock, so that the opals have a different amount of water.

The fact that the Opal has such different colors is due to the fact that the trace elements contained in it differ from each other, such as copper, nickel, silver, cobalt and iron. Some opals, such as the fire opal from Mexico, were created in volcanic rock.

The Opal has a hardness of 5.5 to 6.5 and is therefore in the middle of the table after Mohs. Since its water content fluctuates, the hardness is not constant. The more water is contained in the stone, the softer it is.

The density given with 2-2.2 also depends on the water content. The stone has no cleavage and breaks more splintery. The color of the opal is extremely diverse and can vary from colorless gray to red and yellow. His stroke color is white; its transparency opaque, sometimes translucent. The stone has a greasy and opalescent color play. Some copies have a pearlescent white. 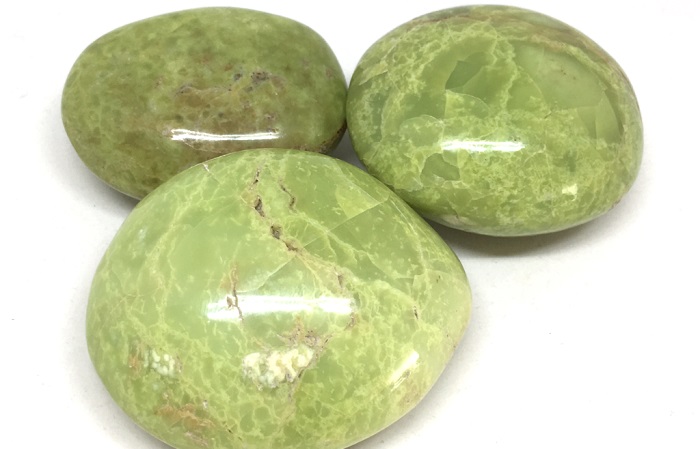 The latter is due to interference and reflection of the light rays between the individual beads of the silica gel, which are only between 150 and 400 nanometers in size. The peculiarity of Edelopalen is that its pebbles are about the same size and are in regular arrangement close together.

Potassium hydroxide and hydrofluoric acid can dissolve the opal. The stone does not melt in high heat over an open flame, like many other minerals, but crackles and becomes dull.

The value of such a stone is mainly determined by its color and how rarely it occurs. Expensive is red, because this is a rarity. In addition, the thickness of the opal layer, the beauty of the grain and the cut, the weight and the processing play a role.

The opal affects the heart, intestines and stomach. The absorption of iron is improved and the kidney is supported. It can remedy digestive problems and works against rashes of the skin. Sexual aversion and power weakness are also reduced by the opal, while throat infections disappear and anemia, as well as anorexia, fever and rheumatism can be alleviated.

In addition, the opal acts against kidney problems leme, relaxation and weakness.

There are different variants, which are processed depending on frequency and value to gemstones. So the solid opal, which has been refined unique and without special processing methods. Then the Dublet Opal, which consists of two parts. The upper part consists of a precious opal, which is connected to the mother rock. The triplet opal is a threefold structure of opal in the middle, quartz above and mother rock below.

In the jewelry industry so-called triplets are often performed. Opals lose more and more water over time, creating cracks that disturb beauty. For this reason, the opal layer is protected by a glued-on layer of rock crystal, toughened glass or lead glass, while a thin, bearing layer of hard rock remains at the bottom. To prevent cracks in old age, opals can be stored in moist cotton wool. The stone should not be exposed to direct sunlight.

The Green Opal stone can help you achieve success in relationships and become more understanding for your partner’s problems. Just keep it close to you when you are together.

Opals are all noble and coveted gems. They are therefore always in the upper price range. These are obtained as rough stones, polished stones, tumbled stones, caresses, pendants and cabochons. Milk opals, noble opals and stone opal are very rare also as donuts or chain available. Girasol and opalescent shells are usually only available as natural pieces and drum polished gemstones. The opal stands for joy, lust for life, serenity, creativity and against inhibitions and depressions.

The Opal is a gemstone that brings through its play of colors, joy and serenity. He also makes sure that you let go at the appropriate time and the child is awakened in adult again. This also promotes the flow of energy in our body, and thus also releases blockages and depression. The Opal promotes wellbeing (to be happy) and leaves the everyday life a little forgotten. Black opals are stones that are particularly reminiscent of the characteristics of our personality. Goals and life wishes are achieved with the help of black opals.

They also protect us from the arguments and wishes of our fellow human beings, who secretly only want to achieve one thing, namely that we give up our needs or postpone them until later.

Black opals are very energy giving stones. Very self-confident and characteristically fortified people should therefore use black opals only in conjunction with precious opals. He reflects the truth, keeping in mind our inner life, our thoughts; takes up positive and negative; strengthens good as well as bad qualities; gives joy, clarity, intuition; relieves anxiety and depression; prevents apathy and lethargy.

Opal, Fire Opal Fire Opal lives up to its name. It gives life energy like a fountain of youth and also conveys a youthful attitude to life: with Fire Opal the Sturm and Drang phase is announced. He makes fire under his ass and therefore helps against inertia and sadness.

If you know what you want, but do not get into gear, then Fire Opal is indicated, because it helps with cold starts as well as in challenging situations in which extreme things must be done in a very short time. It goes without saying that in this case the Fire Opal should be discarded after the task has been successfully completed.

Otherwise you could exhaust yourself too much without noticing it immediately. You learn to enjoy the moment and indulge in the here and now. He makes spontaneous and helps to follow the impulse of intuition, to live more and to think less. One is very receptive to new ideas,

He can inspire and enthrall people. People are looking for personal conversations and exchange about topics that are close to one another. One is sure of one’s own point of view and can well accept that the other has his own. Fire Opal releases kinetic energy that seeks its own channels (and thereby eliminates small blockages). Therefore, he reinforces all the emotions that you express quite naively. Varied from colorless to, white, yellow, red, brown, green, black, bluish, and gray.

Many types of opals are known, but usually only the translucent and translucent species are used as gems. As gems serve z. White, black and fiery (from yellow to red in color) opals, fire opals (with a bluish white opalescence) and opals with uniform patches of contrasting colors.

Other opal types are the Moss opal (with moss-like inclusions of foreign substances), the Milk opal (a porous white opal) and the green opaque Prasopal. The gloss of the mineral varies from glassy to matt. It is colored white to black, and forms are known that range from transparent to opaque.

One of Opal’s main characteristics is the brilliant play of colors that can be found on the more noble stones. These colors come from tiny cracks in the stone, which are caused by hardening. In these cracks, additional mineral has deposited. The refractive indices of the original stone and the additional deposits often differ and cause the interference of the light, which then causes the play of colors.

He often shimmers in different colors. Black opals are the most sought-after jewelry and healing stones because of their powerful fire, which seems to glow from the black interior of the stones. Dark gray opals are already counted among the black opals. These come from a few sites from Australia. Gemstones are found z. In Brazil, the USA, Australia and Java.

The Green Opal stone is not going to affect your financial situation and financial problems.

He is assigned to the signs of the zodiac Virgo, the Scorpio, the Capricorn, the Aquarius and Libra.

Everywhere that wearing the stone increases the joy of life and does its owner good. Its effect on the chakra is especially in the crest, heart, and base chakra.

How to Purify Green Opal Stone

To clean the Green Opal stone just put it under the lukewarm water and do it for 2 times per month.

The Opal stands for joie de vivre, creativity and serenity. He should help against inhibitions and depression. In addition, it can release blockages and positively influence the energy flow. The stone is supportive of listlessness and inertia as well as mental fatigue.

He also promotes satisfaction and communication, self-esteem and willpower. The opal is considered a pick-me-up and emotional lifting.

The opal is worshiped in India as a lucky charm. Among the natives of Australia, he is considered a “stone of the 1000 lights”. In the Orient they say about the opal that he is the “stone of hope”.

The opal does not always have gemstone quality, which is good as a gemstone. The chosen specimens are almost always honed to cabochons. In order for the dazzling red to come into its own, the Fire Opal is often provided with a facet cut.