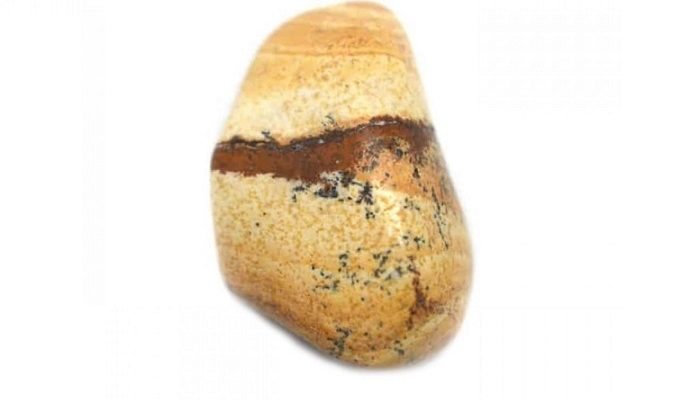 The jasper is fine-grained quartz and rarely found in pure form. Mostly, adhesions with stones such as agates or opals show up. Also impurities of manganese hydroxide or clay often carry the stones with it. Jasper is formed by silicon dioxide seeping into the soil, which absorbs various impurities.

The quartzes are difficult to assign a precise color, since the stitch color is not constantly the same. The opaque stone with a matte greasy finish appears in color plays such as yellow, brown, orange, white, beige or red, often with unique patterns such as speckles or stripes. Jasper is mined in Brazil, southwest Africa, on the island of Corsica, in Siberia, Austria and Australia.

The stones can also be found in Germany, among others in Idar-Oberstein, Mühlheim, in the Harz and in the Erzgebirge.

Jasper is considered the “mother of all gems” in the Bible. One jasper should be the foundation stone in the temple and in the city wall of the “Heavenly New Jerusalem”. The original name of the stone probably comes from the Oriental, in Greek usage, the Latin term “iasis” means as much as “speckled stone”.

Even in ancient times, jasper had importance as a coveted gemstone. The Greeks used the red variety as a love stone for pregnant women, while the ancient Egyptians wanted to increase their sexuality with jasper.

The color variety of the opaque jasper is unique for each specimen and ranges from white, yellow, green over blue and red to gray and black. Ribbons and speckles are possible as well as different nuances in a stone.

The interesting coloring of the gemstone has also provided for its name, which can be translated from Latin as “speckled stone”. Depending on its color or origin, the jasper can carry different names, such as the bright red Mookait or the green-spotted, rare porcelain jasper.

The different color drawings of the jasper are usually found only in certain localities. In general, however, the gemstone is represented almost everywhere in the world. Well-known sites are in Siberia and on the island of Corsica. In Germany, the jasper can be found, inter alia, in the Harz and in the Ore Mountains.

In the Bible, Jasper is the first stone mentioned in the city wall of Jerusalem. The scholar Hildegard von Bingen used in the Middle Ages the jasper, among other things, in epilepsy. Legend has it that the stone should protect against snake and spider bites. Already the Egyptians of antiquity and the Romans and Greeks of antiquity used the jasper for jewelry and as talismans. The jasper should ensure a harmonious pregnancy and increase libido.

Since the jasper can have very different colors and compositions, its field of application is broad and various effects are to be expected. In general, however, the gemstone in stone healing is regarded as the highest “nutrient stone” that can accompany people through difficult times of life, create inner peace and, ultimately, can also trigger feelings of well-being. Especially with a long illness the jasper should be able to help the body to find strength again as a companion.

In meditation, the gemstone can awaken the self-healing powers. Jasper is considered a protective stone capable of absorbing negative energies and thus protecting its wearer. 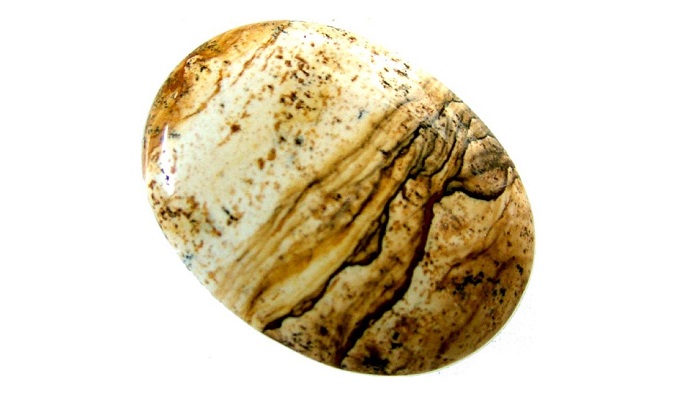 The jasper can have many different admixtures that significantly affect its properties and make it difficult to make a clear assignment.

Therefore, under the name jasper stones are sometimes found in the trade, which are not real jasper stone, but have its possible color.

Jasper, like many other known stones, is a variety of quartz. The jasper has a great importance in the jewelry industry. The name comes from the Latin, in which “iaspis” stands for speckled, where researchers assume that the origin in the Greek or even Persian or ancient Egyptian, and was about the Latin in German “naturalized”. Jasper is rarely found in its pure form. It usually carries adhesions with opal or agate or impurities of iron hydroxide and clay, iron oxide or manganese hydroxide.

The stone is relatively common (with its inclusions and impurities); He is at home in India and Mexico, but is also found worldwide. Locations are known on the Nile and in Cairo, Australia, South Africa and Oregon, further in Germany the Kellerwald in Hesse and the Ore Mountains, the Harz and Auggen and Idar-Oberstein, Yekaterinburg and Ochotsk in Siberia, Sicily and Corsica and Tyrol.

The Picture Jasper stone is not going to help you improve or worsen your relationship.

The jasper comes in blasted into balls and rubbish in tubers, but also in grape and kidney shape. It is formed by silica, which seeps through the soil and absorbs a variety of admixtures. An exact time for its creation was not found. Since the jasper is often found with impurities, or is exposed to adhesions with other stones, it can hardly be assigned to a particular color. His stroke color is variable and not constant. This is white and yellow, red and brown.

The stone is opaque and has a dull gloss of glass or grease. It is not fissile and has a density of 2.58 to 2.91 and hardness between 6.5 and 7. Many specimens are red to orange, going to brownish, and have some interesting patterns. Especially stripes are common or speckles that make sure that every stone found is something unique and so does not occur again.

The stone is to shield old traditions for diseases, and renew spirit, heart and mind. It affects the kidneys, blood, bladder and intestines, bile, liver and stomach. He helps with problems with digestion and also with abdominal pain of any kind.

In addition, he should bring women who wear him, a harmonious pregnancy. In some cultures, the pregnant women particularly like to wear jewelry with jasper, which they then pass on to other women. The red specimens are said to help with nausea, but also against excessive appetite. The stone can be made into jewelry, but can also be used as a hand flatterer or tumbled stone. Even unprocessed stones are attributed to such healing power.

The jasper is supposed to bring inner harmony. It promotes calmness and mindfulness, and may be conducive to willpower and perseverance. This leads to private and professional successes. He gives energy that helps us to realize goals and ideas. He should promote the understanding of other people. Jasper is the ram-born stone. He gives them steadfastness and is at the same time a secondary stone for the Capricorn, to whom he gives confidence. In addition, it is a good complement to some other signs of the zodiac, as the calm and serenity the stone can transmit perfectly complements other stones.

The jasper supposedly works particularly well on the solar plexus chakra. If he is used for meditation, he activates the self-healing powers in a special way. The jasper is mainly used as a gem stone.

This has a long history, because even with the ancient Greeks and Romans he was known for it. Although he was no longer regarded as significant in the meantime, today he is again in the interest of researchers and buyers.

His beauty is valued today and he is also popular as a healing or esoteric stone. Apart from jewelry in the form of necklaces and rings, etc., they are currently producing cans and vases, table tops and architectural jewelry.

The world’s largest polished stone of this type is a shell in the Hermitage in St. Petersburg. It has a size of over 5 times over 3 meters and weighs about 19 tons. In Saint-Augustin-Hangelar there is a ground ball weighing 2,850 kilograms. Even in Germany, large jasper is too admirable n – in the German Gemstone Museum in Idar-Oberstein. There, a 224-kilogram ball with a diameter of over half a meter was cut from a 900-kilogram blank.

To be used as a healing stone, the jasper is worn on the skin or hung up. Healing stone water, which was made with the jasper, should be drunken one hour before a meal. Even on an empty stomach it fulfills its purpose and is particularly well tolerated. It should be avoided that the stone is placed in warm water; it should be at most room temperature, so it is well tolerated.

The colorful jasper is a variety of quartz and closely related to the chalcedony. The gemstone is popular as a gem stone and is also used as a seal stone or for the production of various design objects. In Russia’s Saint Petersburg, the largest object currently made of pure jasper is a bowl of Revnev jasper with a circumference of over 12 meters and a weight of 19 tons.

Jasper meditations help with overweight, stress and anxiety, dreadfulness and lack of memory.

For the zodiac sign Aries Jasper has meaning as the main stone, which helps to steadiness and willpower.

How to Purify Picture Jasper Stone

After use, especially on the skin, the jasper should be rinsed under running water. The charge is done by rock crystal.

Even today, the red jasper is attributed sexuality-enhancing properties. In addition, the jasper is important for stress relief and should help to a harmonious pregnancy without discomfort such as nausea. The strongest energy stone is the blood jasper, also known as heliotrope.

The effect of this subspecies is extremely revitalizing and purifying for the entire organism. Jasper is today a commonly used jewelry and healing stone, but is also used in the production of vases, mosaics and table tops.

The Jasper effect in terms of the psyche manifests itself in the enhancement of self-confidence, will-power and stamina. The powerful jasper healing stones stand for mental strength, durability and conciseness.

Furthermore, Jasper is known to relieve anxiety, nervousness and anxiety, promote conflict preparedness, and work favorably on stress. Despite the wide range of colors and varieties, the jasper healing stones have similar basic effects, yet the healing powers can differ in their intensity.

The jasper stimulates the circulatory system and should also have a rejuvenating effect. The mineral strengthens the organ functions, counteracts fullness and nausea, stabilizes the immune system and helps with indigestion. Kidney and liver diseases can be relieved with jasper. The red jasper is a very powerful helper with frequent vomiting and has a stimulating effect on blood formation. The green jasper experts recommend especially against hyperacidity and nightmares.

The jasper is a powerful energy stone, so you should wear it directly on the skin. Particularly helpful in diseases of the spleen, bile and stomach or nervous system disorders is a chain of red jasper orbs. The gemstone is also suitable for making jasper tea or jasper water. Here it is important that you follow the instructions exactly. After use, clean the stone under warm water.

It is best to clean the health stone overnight in a bowl of hematite tumbled stones. Even in a rock crystal group, the jasper can recharge your batteries. The most intense effect of the red jasper on the root chakra and on the sacral chakra. The stone forces penetrate deep into the body during meditation. In the relaxation phase, you can see how the jasper releases blockages and cramps.