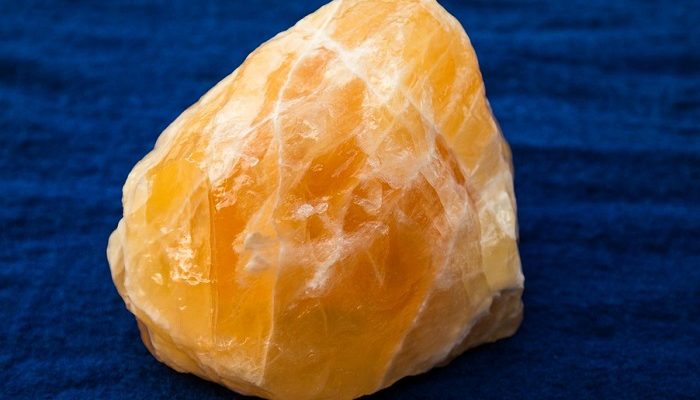 The calcite stone (stands for Latin calx >> lime) is very common in nature (in the earth’s crust). Calcite is a coveted mineral in the pharmaceutical industry because of its high calcium content. The particularly high calcium content should play a major role as a remedy for the bones.

However, the stone is also used for the production of building materials, fertilizers and paints. Calcite has a rare feature – a double refraction.

As a result, pure calcite crystals are also used in the optical industry. Its low hardness, however, makes it unusable for use as a pure gemstone. Sometimes calcite is honed in cabochon or smooth cut. As a mineral, it occurs mainly in Belgium, Brazil, Germany, Italy, Iceland, Croatia, Mexico, Romania, Slovenia, the Czech Republic and the United States.

The calcite is one of the most common minerals, but relatively rare in the bright orange colors. These are usually obtained as rough stones, tumbled stones, pendants, caresses, or previously washed in acetic acid hand stones. These lose their sharp edges after treatment and thus get a wonderful shine. The acid treatment is only for visual beautification.

On the inside of the stone as well as on its effects, this treatment has absolutely no influence. Furthermore, there is this stone as a necklace, donuts and many imaginative particles for choker and leather strap.

The Indian people of ancient Mexico called the orange calcite a burning stone. They believed that he would store so much solar power during the day that he would not stop lighting at night. The Indians believed that possession of such a calcite would not make the evil spirits approach them, as they would mischief in the night, and the sun-colored orange calcite would never let it be night because of its luminosity.

The Calcite (calcite, calcite) is a very popular healing stone, which is also known in the German vernacular as Beinbruchstein. It is a mineral and at the same time namesake for the Calcite group within the mineral class of the carbonates. He has very different colors. The calcite is considered a healing stone for bones, nails and teeth, its tradition goes back to ancient Greece.

The name calcite is derived from the Latin (calx = lime) or the Greek (chálix = lime). It is one of the most abundant earth crustal minerals. Due to its high calcium content, calcite is used mainly in the pharmaceutical industry.

Already in ancient Greece he had a great importance as a healing stone. The high concentration of lime contributed to the fact that it was often used in the production of healing ointments.

Also, the calcite was considered a protective stone against evil spirits. The lime in calcite has also been used in the treatment of difficult-to-heal wounds, although this treatment has not been very useful. In folk medicine, calcite is also used for calcium deficiency. 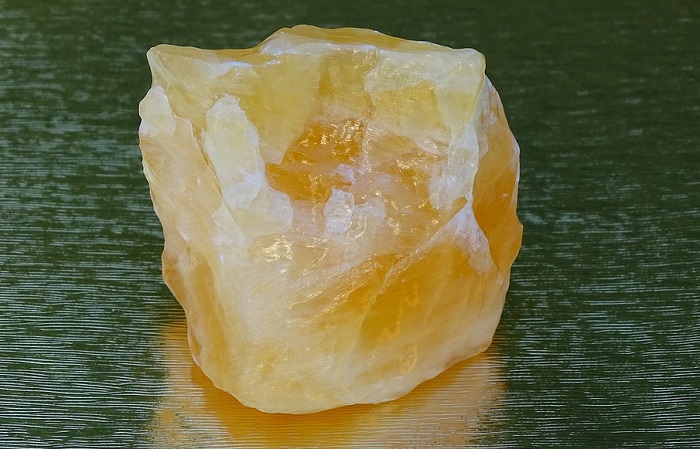 As a gem, the calcite is less suitable because of its low hardness, yet it can be found as such every now and then in the cabochon or smooth cut. The stone comes in a variety of colors and shapes.

The calcite is formed secondarily by deposits and weathering. It is a rock-forming mineral that belongs as calcium carbonate to the mineral class of carbonates. Calcite consists of calcium, oxygen and carbon and contains deposits of iron, cobalt and manganese. The mineral occurs in different colors and shapes; the color is influenced by different minerals.

Calcite is very common worldwide. The occurrence of the different localities varies. Calcite is mainly mined in Brazil, India, South Africa, Austria, Mexico and the USA. The largest deposits of calcite are also due to deposits of the oceans, where the components of shellfish and skeletons of other marine life settle. In the formation of calcite, corals and their reefs play a crucial role.

Although many different deposits of calcite exist, it is not always the case that degradation is meaningful or of economic importance.

The effect of orange calcite (because of its color) is very diverse and its effect can be felt during the day or at night. Adults and children benefit equally from the qualities of this gemstone – it is intended to promote spiritual development, give the wearer more self-confidence and generally more optimistic about life. In everyday life you can overcome all obstacles more easily with more energy and steadfastness.

In addition, the stone should help to a quieter sleep, sharpen the memory and protect the night from nightmares. At the organ level, it shows its positive effects on muscles, bones, spleen, connective tissue, stomach and kidneys.

A healthy bone in children is promoted by the use of orange calcium, the intervertebral discs are strengthened, the fractures heal faster, and knee problems are alleviated.
Stomach and digestion: a good antidote for gastric ulcers, orange calcium to relieve the feeling of fullness and nausea and reduce the nausea.

Muscles: help with muscle diseases and discomforts such as sore muscles. General effect: the stone strengthens the immune system and connective tissue. the gemstone strengthens self-esteem and self-confidence, one gains more confidence in one’s own abilities, which until now have often remained hidden, one acts more openly and laughs more often. The Orange Calcite is said to promote a positive attitude to oneself and to life, to strengthen the memory and to open new perspectives.

Calcite consists almost entirely of pure calcium, which makes it a wonderful helper for our bones, it strengthens them, strengthens the intervertebral discs, protects against bone disease and bone loss. No matter what problems arise here, the calcite is always a good support, even as a “bone building block”, if something is broken. He also acts very relaxing on the pelvic area and relieves knee problems.

It also has a very healing and protective effect on our muscles and relieves sore muscles, muscle tears and other muscle diseases. After exercise, or sports injuries, rubbing in painful areas with orange-calcium water is recommended. Helping children to develop healthy bone and upright gait, children also promote calcium intake, thus ensuring healthy skeletal development. In addition, it helps with stomach problems, as well as spleen and kidney disease and increases low blood pressure.

The orange calcite can be placed on the painful areas and possibly attached with a plaster or be worn as a necklace or pendant. If you place the mineral under the head pad, it relieves nightmares, lunacy and sleepwalking.

Highly recommended is orange-calcite water, as it gives us strong hair, nails and even protects our teeth. Drink throughout the day, preferably in the morning after getting up to start. Of course you can also other calcite and rock crystal as an amplifier into the water – as soon as some water was taken from the pitcher with the stones, fill with fresh water. The healing information of the stones is absorbed very quickly by the water and passed on to our cells by drinking.

This healing stone gives us joy of life, optimism and gives us more self-confidence. It improves our memory and keeps the elderly spiritually active. He makes young people more responsive. He also supports our intuition and helps us fight off intrigue quickly. Orange Calcite strengthens the solar plexus and thus also the self-esteem, self-confidence and the feeling expression.

Orange Calcite gives us more radiance and appeal. Due to its strong color, the orange calcium penetrates into us as a warning energy stone. Its soothing effect under the pillow at night alleviates nightmares and lunacy. During the day, however, the orange calcite makes us react brightly and quickly, intuitively recognizing situations and fending off intrigues.

Calcite is a relatively soft stone because it only has hardness 3 and comes in many different colors. Because of its high calcium content, it is also often used in medicine as a raw material for medicines.

Calcite is one of the most abundant minerals and is found almost all over the world. The most beautiful, because most colorful, but come from Mexico or Peru.

The orange calcite got its name because of its color and some pieces, especially if they are ground; arouse the need to simply put them in the mouth, because they look like delicious sugars. Its appealing color and many applications make it a very popular healing stone. Incidentally, the Indians of Mexico believed that the stone could store so much sunlight during the daytime that it would continue to illuminate during the night, so they called it a burning stone and used it to protect it against evil spirits.

Since this stone consists of almost pure calcium, which is part of our bones and teeth, it should be especially good for them. Healing water with this stone is supposed to help with all sorts of bones. He also helps with hair splitting, brittle fingernails or tooth decay.

for a great zest for life, self-confidence, optimism, enlightening as well as calming, relieves nightmares (sleep disturbances) and moonlighting as well as fear of the dark, intuitively recognizes situations and avoids intrigues; reflects the sunlight of a bright day even in dark hours, well used in mourning and in separation situations; colorful stone for children, to strengthen their development; intensifying in partnership, brings to light the beautiful sides of togetherness, connecting; good companion at night

The biggest part of Orange Calcite when it comes to wealth and finances is in its ability to give you financial stability.

This powerful stone is going to motivate you to start accomplishing goals and achieving the plans you have set up for yourself. Whenever this stone is close to you and your heart, you are going to be able to achieve anything you imagined.

Most calcite varieties are not associated with a zodiac sign. Only blue and green calcite and orange calcite can be assigned star signs.

The blue calcite is a balance stone for the sign of Cancer.

Chakra, Solar Plexus Chakra, and 2nd Chakra, Intimate Chakra, with themes such as “Living the Inner Sun”, being creative, enjoying sexuality, meditating in orange-calcite meditation, sinking into it, connecting with it, using its luminosity.

The orange calcite is a particularly strong stone for the spleen chakra with tendency to solar plexus. Strong orange translucent pieces should always be used alone, as they are very energetic. After lying on the chakra as well as on the back of the hand and knees, they quickly give us a soothing, pulsating effect.

How to Purify Orange Calcite

It works to its fullest effect when it is worn directly on the skin. You can also apply it specifically to the appropriate body site or use it as water for internal and external use. It is worn as a pendant, used for meditation, placed under the pillow, used as an essence for rubbing in or drinking as orange-calcite water in the morning on an empty stomach.

It has a special effect on the spleen chakra, with a slight tendency towards the solar plexus chakra. Place the pieces of stone directly on the chakra and on the back of the hand and knees. In this way, one immediately feels its warmth and receives its pulsating, soothing effect. Orange Calcite is assigned to the Zodiac sign of Gemini.