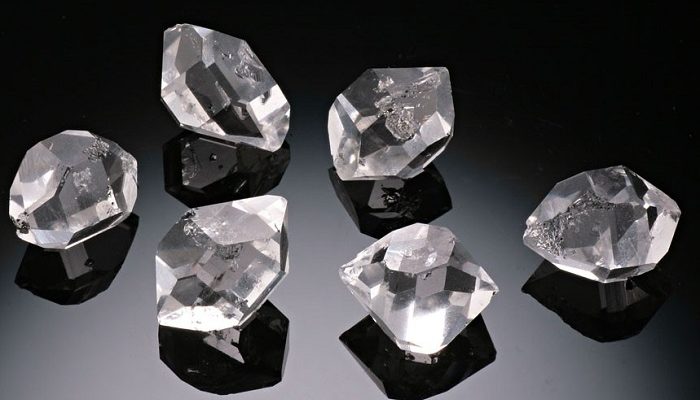 The Herkimer diamond also serves as the rock crystal and the diamond as a light source. These have the characteristic that you open the chakras particularly deep and wide and free them with the addition of pure energy for the absorption of colored stones. Herkimer diamonds can therefore be used for every chakra. Large Herkimer tends in their properties close to the diamond.

You even have enough energy to let the inexperienced meditator into a rush of eternity that often finds its end in deep sleep. We therefore recommend that you use crystals that are no larger than four centimeters.

In combination with color stones, the Herkimer diamonds achieve a special harmony. Forces from the subconscious are pushed into our conscious thinking. Now we have the opportunity to objectively decide and answer these things that subconsciously move us.

The Herkimer crystal should always be aligned horizontally on us. In combination with a green color stone (especially chrysoprase) it allows us to see if the partner we are looking for fits in with us or if the partnership is just out of habit. Combined with an amethyst on our forehead, we can clearly see whether future contracts are really fair, and whether we really need the item on which the contract is based. These characteristics of the Herkimer diamond can be experienced in conjunction with color stones on almost all our chakras.

Herkimer Diamond is a rock crystal variety that has a similar structure to diamonds. He has always been a much sought after gemstone and healing stone. It has been reported that Herkimer quartz was already known by the Mohawk and Iroquois. There are two different theses to his name.

One is that he was named after the American General Herkimer, who confused them with diamonds during the civil war and wanted to use them to finance military action. According to the second thesis, Herkimer quartz was named after Herkimer County in the state of New York, as this is the only locality. Its unique structure has a very strong effect on us and thus resembles the diamond.

For the Mexican healers, the Herkimer is one of the healing crystals most valued when interacting with their patients, so they are usually set in gold (leaving both ends to the air) and carrying it as a pendant over the heart area ( The therapist). For the Mayans, this small crystal was very special and important; they called it TLAQUAUACTECPATI, which means: Light of the goddess and the heavenly god.

The American Indians also knew their extraordinary power: they granted to the Herkimer the property of possessing a spirit of nature totally transparent, pure and of very high spirituality that allowed the soul to experience the lessons of matter with nobility and impeccable intention throughout life of every human being. A beautiful definition to describe the energy of this peculiar quartz.

The special clarity of this diamond-like rock crystal makes it especially effective in meditation. Because it helps to hear his inner voice, bringing a connection to the third eye, the seat of knowledge and intuition. He is placed on the front chakra.

The Herkimer Diamond is also used as rock crystal water. Since he is a perfect stone in his form he should not be further processed. It is recommended to always use a rock crystal for the same purpose. Rock crystal enhances the effect of all other stones and moderates to intense stones. The gemstone water of the rock crystal has a particularly intense effect. He is a very strong water stone. 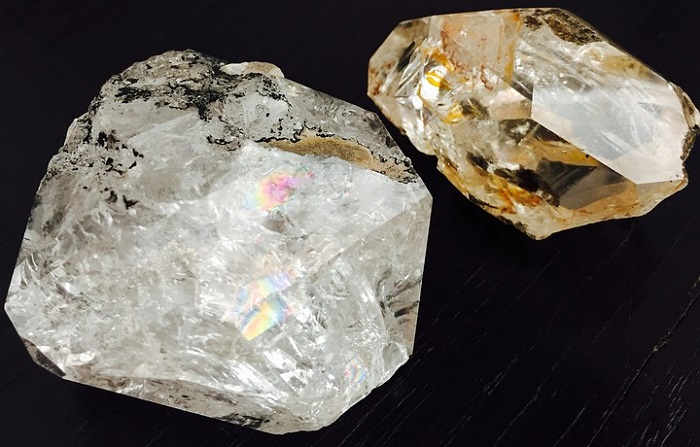 In addition, he is particular that it significantly enhances the effect of other gems in the production of gemstone water and speeds up the production.

Its name, Herkimer, is due to the place where it abounds more: the state of Herkimer, in New York. There are also Herkimer’s in Mexico, Tanzania and Spain (Asturias). Its size is usually tiny, however, as we will see below, in this wonderful crystal, the size is the least, even so, sometimes, we find a copy of medium size and particular and extraordinary strength and beauty, such as shows the photograph, inside which you can see golden inclusions of lithium. The wonders that are attributed to the Herkimer as healing crystal are based on a prodigious energetic fact: that of unifying the purpose of the mind and the purpose of the soul in only one direction: that of realizing us in life.

To do this, obviously, you must incorporate daily attunement with your potential, with your energy. I mean that every day, for a few minutes, we dedicate a relaxing time in which we will place one or several Herkimers around the head area. We can accompany this practice with music of relaxation, the aroma of an incense of our liking and trying to feel the beneficial energy that will establish the vibration of the mineral towards our cerebral hemispheres, with no other motivation than having a relaxed mind and body, letting ourselves be carried away by the chosen music and allowing the language of feelings to open up.

Its powerful magic is that simple. The complicated thing, in these so accelerated times, is to allow us to find every day a moment of relaxation, without more noise inside and outside of our vital space than the beat of our heart. In this way the light of the Herkimer will open its way so that what our heart wants and what the mind is capable of achieving, will be united, consolidating the steps towards what we want to achieve: well-being on a day-to-day basis.

We can take it on the body inside a cloth bag (shamanic bag), we can place it under the pillow to sleep, we can leave it at night in a glass of mineral water and on an empty stomach drink it in the morning; its clarifying properties will have an effect by enhancing cellular wellbeing; we will find ourselves with renewed strength and enthusiasm both physically and psychologically.

In face-to-face therapy a Herkimer can be placed in the center of each patient’s chakra surrounded by other corresponding minerals in chromatic range to each vital center: in this way a balancing and harmonizing effect of the auric field will be achieved. And, in general, its area of application is that of the crown chakra, because of its already mentioned ability to unify the qualities of the cerebral hemispheres.

The Herkimer diamond is going to affect our love by waking up love we feel for ourselves. At an energetic level it brings joy, ability to celebrate life; its vibration allows the mind to find easy and positive solutions to face changes, challenges and overcome them, which makes the Herkimer a wonderful companion crystal to wear as a pendant, meditating holding it in your hands or placing it on your forehead in a relaxed state).

Awareness, self-realization, clarity, life force, life energy and vitality. The Herkimer Diamond can provide more vitality, relieve tension and have a positive effect on the brain, nerves and senses. In addition, he is said to have very good support healing processes, strengthen the immune system, prevent inflammation and infection and detoxify the entire body.

Likewise, it can be used effectively in strains, fractures and bruises. It can be pain-relieving when three crystals are applied to the affected area. Herkimer Diamond is particularly well-suited in combination with other healing stones.

The Herkimer Diamond is going to make you more productive, so wealth is going to come into your life on its own. This powerful stone is going to give you power and strength to accomplish all of your goals so push harder if you want to achieve everything you imagined.

Diamonds have always been symbols of wealth and prosperity. Herkimer Diamonds should be worn around the neck and close to your heart. This is going to serve as a protection and talisman against bad luck and negative energy.

Each date of birth can be assigned a healing stone, which promotes and motivates its support in its strengths. These birth stones can be determined by birthday, birth time and place of birth and the resulting constellation.

However, the determination after the birth decade is usually sufficient. Each zodiac sign is divided into three decades, each about ten days. Every decade, the typical characteristics of the sign are different and accentuated. We have developed a system that selects the appropriate Decade Stones depending on this expression and the chakra and its resonance color.

At the level of the chakra, the lion corresponds to the solar plexus chakra. His planetary ruler is the sun. Both stand for the seat of the personality, for charisma, power and responsibility and both are in resonance to the color yellow.

The form of growth of the Herkimer is different from the way in which a common quartz grows; while the transparent quartz we know grows in the interior of the earth taking advantage of the circumstances of heat and pressure that allow their atoms and molecules to orchestrate their growth, generally directed towards the vertex or apex, in the Herkimer the siliceous atoms are arranged from cavities of a parent rock called dolomite (whose chemical composition is magnesium calcium carbonate), so that in its growth its atoms and molecules are ordered to different spatial points resulting in two vertices and, generally, 18 facets throughout and width of his body.

Herkimer Diamond is an important stone in the meditation, because like the diamond, he is able to open the chakras particularly wide. He has a strong effect on the mind. Put on the head chakra, he should promote the knowledge and bring clarity in decisions. In addition, he should strengthen the consciousness and show mistakes, so he can bring orientation and drive self-realization.

Like all mountain crystals it gives vitality and helps to make better decisions. Even past experiences can be handled better by the Herkimer Diamond, so that it makes the mind accessible for new impressions. The dream memory can be improved with his help.

How to Purify Herkimer Diamond

Clean once or twice a month under running lukewarm water and place in the sun to recharge. Chains should be stored overnight with hematite tumbled stones.

To clean our Herkimers immersion in water-salt is necessary for a few hours after each session of meditation and / or therapy to be able to cleanse of all adhesion of emotional energy that may have been impregnated by its use both personally and in face-to-face therapy.

To energize them: we can expose them to the light of the sun, the moon, the earth, on a druse of quartz tips, placing it under a pyramid, in the center of a copper circle, in the middle of a triangle of lighted candles, spraying it with an elixir-like preparation, impregnated with the vibration of the heart’s own beat, placing it on rose petals these are the best methods of energy recharge that we can give periodically to our little Herkimers teachers.

Those of small size are easily recharged if we place them from time to time inside the two halves of a small/median druse of quartz.

The Herkimer Diamond is a precious stone that boosts your vitality and energy. Whenever you feel like you need more strength and power in your life, this precious stone is going to help you become stronger and much more certain in your decisions. Herkimer diamond gives you all the necessary protection and support to achieve the goals you have set up for yourself.

The Herkimer Diamond is your faithful guide and help in moments when you need support and a bit of magical help. Believe in the power of this powerful stone and you will certainly be happy.