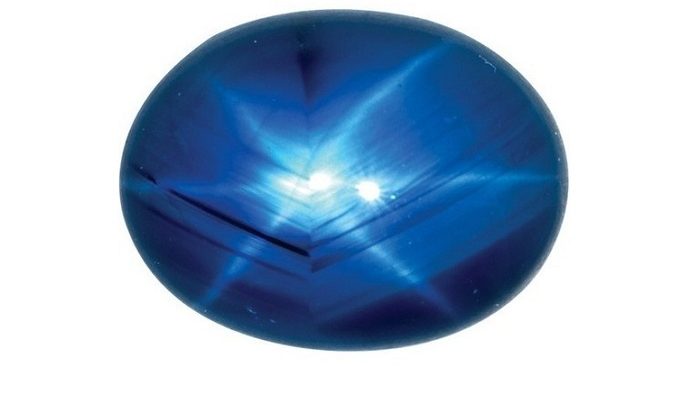 The star sapphire gemstone is one of the most popular gemstones in the world and much sought after by collectors and jewelry lovers.

Together with the diamond, ruby ​​and emerald it is one of the most popular stones in the world. Very typical of the star sapphire is the optical effect of asterism. The star sapphire is distinguished by a star-shaped rays, which makes it so popular and popular.

The star sapphire is best used in sunlight. Since he can unfold his full splendor. The star sapphire must be cut as a cabochon, otherwise the well-known and famous asterism does not occur. It is especially good to observe the levitation of the individual rays as the stone is carefully moved back and forth.

The star sapphire is a gemstone belonging to the corundum group. In addition to the blue sapphires, there are also green, yellow, brown, colorless or black sapphires. Very often the sapphire appears in different blue tones.

The color may range from a rich cornflower blue to a black and blue. The incorporation of rutile in some stones can create a particularly silky shine. The star sapphire is characterized by the famous cat eye effect.

The famous asterism can only arise under certain given circumstances. There must be sufficient deposits of rutile. In addition, the rutile needles must be stored in accordance with the crystal system, otherwise no asterism comes about. In addition, the star sapphire must also be unaffected round, oval or semicircular ground, so that the asterism can arise.

Very famous and well-known in the industry is the star sapphire “Star of Bombay”. It is cut in the shape of a cabochon and weighs 182 cts. He originally came from Sri Lanka a very beautiful and striking blue-violet color.

The name of the star sapphire comes from the term “sappheiros” and stands for “blue”. The addition “star” comes about because of the typical effect. If the stone is particularly pure and has no inclusions, it is especially valuable and expensive.

He is also more expensive the more intense the color is. In addition, the price is also dependent on the amount of carats. The largest star sapphire ever found is currently in New York and is called “Star of India”. It has a carat number of 536 and can be seen in the well-known Museum of Natural History. 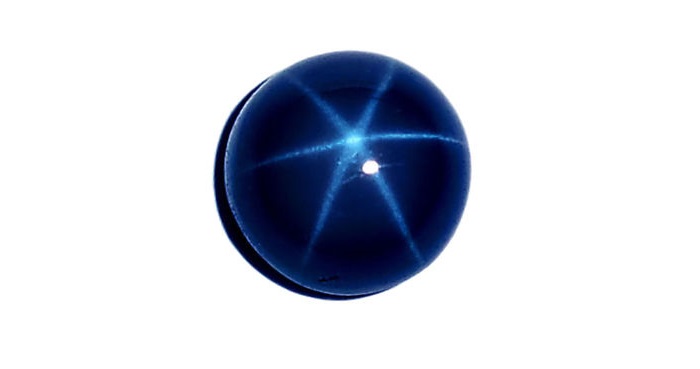 Starry sapphire with its blue vibration and trigonal system this beautiful stone speaks to us of the expression of talents, but also of inner discipline, order, serenity and concentration. The presence of the star on some sapphires (a phenomenon called asterism), makes them powerful allies in helping us to identify our life purpose, the mission we have come to accomplish on Earth, and to concentrate our energy in a continuous flow in support of the our project.

Sapphire is formed in magmatic rocks particularly rich in aluminum such as granite, selenite and pegmatite’s, or in metamorphic rocks such as gneiss, crystalline schists or marble. It owes its color to the presence of iron and titanium within its structure. If the needles of rutile are present in the sapphire, the phenomenon called asterism occurs, which results in the presence, at the center of the stone, of a formation with a six-pointed star, white gold, which concentrates and reflects the light.

The sapphire energies converge at the center of the star and shine, inviting our energy flow to do the same.

Among the ancient Indo-European cultures, the sapphire, whose name derives from the Sanskrit “shani”, meaning Saturn, was considered the very stone of this planet: The star sapphire is our partner in identifying and pursuing our life purpose. It promotes mature and conscious communication with others and also contrasts the tendency to be dispersed, apathetic, distracting. It allows us to objectively examine our life and to modify its undesirable aspects. It makes the desire for knowledge and wisdom more intense.

We can wear it as a jewel or use it during meditation, placing it at the center of the throat, above the thyroid, in the middle of the eyebrows or on the stomach, and imagining a beam of light that descends from the cosmos towards us and enters through the stone in our belly, while from the depths of us another beam of light rises, to meet at the center of the star with the cosmic one, in an exchange of love.

On a physical level, the starry sapphire or its gem elixir promotes all healing processes, especially mitigating bowel, brain and nervous system disorders.

The Star Sapphire stone helps you break out of your shell and grab every opportunity to spend it with your loved one.

Keep this stone close or even gift it to your partner to make him feel the love you have inside of you.

Sapphire is a precious stone with a very intense color that derives from a mineral called corundum, the same as ruby. The Persians even believed that it was the sapphire reflections that caused the sky to have that color.

The most important deposits, especially with regard to blue sapphires, are in Sri Lanka and Burma but also in Australia, Madagascar, China, Vietnam and Kashmir. It is said here in India that the most beautiful sapphires in the world were extracted in 1881. The oldest sapphire mines are found in Ceylon, precisely Sri Lanka. Ceylon sapphire is recognizable by the brightness and brilliance of its light and its medium blue color and has a high value.

The coloring process of a natural mineral depends on the presence of some elements: iron, chrome or aluminum inside the stone structure. The most famous and known sapphire specimen is the blue one. Its name comes from the Latin “sapphirus” which means “blue” and this is why when you think of this gem this color comes to mind immediately.

The shades of blue change depending on the deposits where it is extracted. For example, sapphires from Kashmir and Burma are deep and velvety blue; those of Madagascar and Sri Lanka may appear in a range of colors ranging from azure to dark blue.

On the page on blue gemstones you can find information regarding the blue sapphire. The sapphire, however, is not only blue but can be of other colors, shades and shades: white, yellow, black, pink, pink-orange, green, gray, purple and colorless. Let’s see some of them.

This sapphire variety is called Star Sapphire Stone, derived from the Greek leykós-bianco. Its colorless appearance and transparency are due to the absence of foreign coloring elements. The white sapphires release a silver and cold but very intense light. Generally it is cut into brilliant and its value increases according to the carat weight; the higher the weight in carats, the higher its value will be.

White sapphires date back to Ancient Greece, were discovered on the island of Naxos. The lightly treated yellow sapphire has a pale color but through a heating process it can intensify its color which in this way is brilliant. This yellow hard stone is important in Indian and Vedic astrology and is called Pukhraj, which means precisely, yellow stone. V

irtues were attributed to the yellow sapphire: it was believed that it directed light, peace and wisdom towards those who wore it. Hindus consider it the gem of the planet Jupiter.

The Star Sapphire stone brings you luck and can help you boost your financial situation if you carry it close to you.

The Star Sapphire Stone is not linked to any specific Zodiac sign.

The sapphire instead has a blue light that is like a song that rises from the depths of the ocean and tunes us in with our mission to accomplish. It tunes us in with everything by which we will become fully ourselves, unfolding our talents as wings.

It especially stimulates our fifth chakra, the throat chakra, linked precisely to the expression of what we believe and to communication with others on higher planes.

How to Purify Star Sapphire Stone

To clean the Star Sapphire stone just put it under running lukewarm water and use a bit of soap if necessary. Don’t do this too often in order to preserve the condition of the stone.

Sapphire is generally a pure and eye-clean gem, this is an important element for evaluating and establishing its price but there are specimens that have microscopic inclusions called flowers, milk or silk that can give the sapphire a velvety or soft appearance making it more beautiful.

A particular sapphire variety is the Star sapphire and is so named because of these needle-like inclusions that form a star on the surface of the gem. Usually this star effect is given by six equidistant and straight rays but rarely there can even appear as twelve.