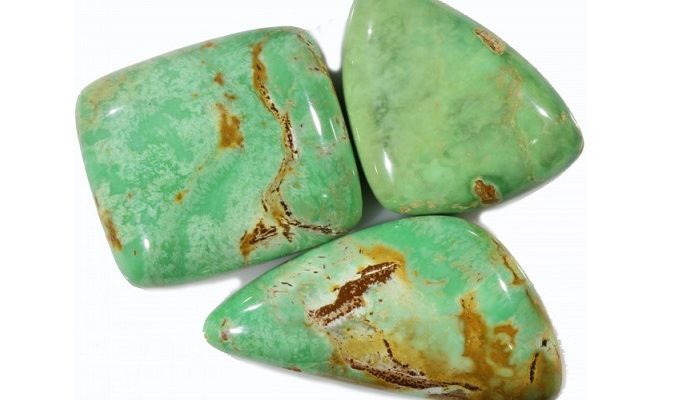 Variscite is a beautiful stone, pale green, similar to turquoise. It is an aluminum phosphate named after the name Vogtland received, corresponding to the German district where it was discovered.

In Spain, in Gava (Barcelona), there is a Neolithic exploitation in which its mineral was used as an ornamental product.

In the past there was a tradition in which four variscites were buried in the different cardinal points of a farm.

The objective was to act as defenders of the place and of what the farm produced, whether they were animals or food.

The deposits, which are unusual, can be found in Germany, Austria, the Czech Republic, Spain, the United States and Bolivia. It is usually associated with jewelry, but not with the ornamental branch what can be called fine jewelry.

Formerly it was believed that if four of these gems were buried in the four cardinal points of a farm, they would serve as guardians of the farm and thus protect what was given in it, be it the breeding of cattle or any kind of cultivation and even both in case the farm was dedicated to both things, it helps its bearer to awaken courage and hope, it is widely used by some Pnotists to explore past lives without creating any trauma or disturbing the person in any way.

In the medical sense it is said that variscite is very useful for various diseases because it regenerates any damage to the nervous system, it helps the elasticity of the veins to be maintained, as well as the production of collagen, it helps in case of heartburn, abdominal distension and even ulcers and rheumatism, it is also very useful to combat cramps and swelling of the feet especially in pregnant women and in the case of men it helps to combat sexual impotence.

It is recommended to use it almost naturally, that is, without any treatment that goes beyond a simple polishing, it is recommended to use it directly on the skin preferably in a pendant or in a bracelet composed only of the gem and it is said or better recommended because one of Its properties are to help fight with depression and spiritually open the way to the energies of the universe and maintain trust and faith both in us and in those around us.

Variscite is a mineral that does not have a use apart from being a gem, due to its green color and not being so common it is only named by experts, especially for its great resemblance to turquoise and jade.

It is said that it is a gem composed mainly of iron, the reason for this is that it has large amounts of trivalent iron and is part of an isoform series, in nature it is very rare to get it crystallized and less with well-formed large crystals, in general it is found in rocky and compact form with small crystals embedded around it. 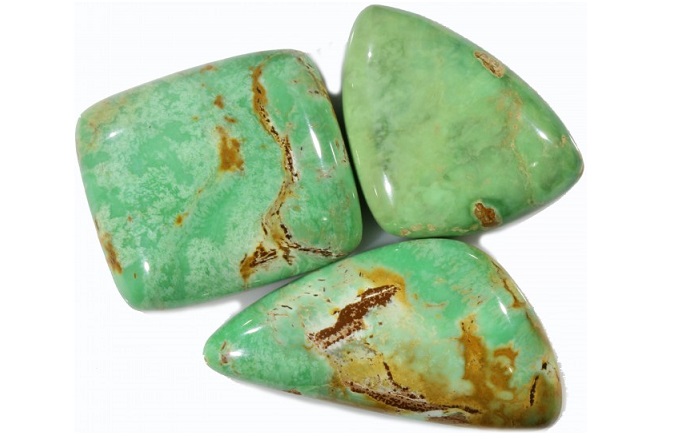 Its green or bluish green color is mostly due to the iron that is in its composition and in fact at the time of its crystallization it cannot be taken as a gem of great hardness like most, in fact it is a rather soft gem and easily modeled, its name comes from the region of Variscia which was the old name of Vogtland which is a region of Germany where in fact it is where the mineral was discovered, that is the real reason why its name and why not It is so well known.

This gem, unlike most of the others, does not occur at great depths, nor under great pressure and intense heat, it is very common to see it in or rather to find it near water deposits that have a high phosphorus content and that Rocks also have a significant aluminum content, this is more common seen in cave and islands and has more to do with the decomposition of guano.

The mines of this gem or at least the oldest ones are in Catalonia and are called the Gavá Galerias, where this mineral has been exploited, according to records from the Neolithic and that its production increased in the Middle Neolithic, also in the province From Zamora there is a large amount of the mineral in a place known as the Panzuelo de las Cuevas, other large mines or large ancient sites that are far from Europe are Lucin and Fairfield, the two located in the United States, more specifically in Utah.

Although the deposits or at least the oldest ones have already been mentioned, the majority of this mineral is currently extracted from the United States and while the other deposits are still active, there is one in Tooele County, also in the state of Utah.

The site where it is still completely pure and not with any other trace of another mineral or another precious stone, which occurs with the deposit found in Ely in the state of Nevada where it is achieved in conjunction with the quartz of the desert and is called Amtrix, but despite not being considered pure by the presence of quartz, it continues to maintain its green color, only that it looks a bit more attenuated by the other stone.

This stone helps us stay in a calm state, since calm is a virtue that every human being must possess even if at some moments in our lives it is extremely difficult to keep ourselves in a state of stillness.

Very few people have this virtue, that’s why the Variscite helps us manage our emotions and our character, because in some moments we behave like children who are manipulated by daily circumstances.

Variscite has always been associated with jewelry, but not fine jewelry but ornamental jewelry, it is very associated with the sign of pound, and because it says that it helps keep the chakras and body energy in balance, is associated with increasing authenticity or bring out the true self of its bearer.

It is associated with the spleen and the heart as it helps keep them healthy and ensures that the heart pumps blood properly to maintain body balance and that is why it earned the nickname of the balance stone or the stability stone.

It is said that it makes its wearer aware of how it is and helps it to show itself as it is, it helps to maintain a good mood and raise it in case its wearer has it a little low, and it also provides good sense and clear thinking and above all the rational thing.

This is more than anything so that its wearer expresses clearly and can be easily understood, that is, speech is applied as you think, if the bearer of this gem has a clear, sensible, lucid, simple and easy understanding, likewise will be expressed with others, and apart from all this also sharpens the ability of perception of its owner.

The variscite is a stone quite appreciated for the properties it shows to have on the physical plane. Its main effect is soothing, which also allows the maintenance of energy reserves.

Among the other benefits we find that of fighting states of hyperacidity.

It is in fact recommended for those who suffer from heartburn. It does not replace a therapy but can support it, helping it to reduce symptoms first and at the same time intervenes on the energetic nature of the problem. Also useful in case of gastritis and gout.

The variscite is a stone that promotes rationality, returns with feet on the ground and gives the right lucidity to make considered choices. It helps to express oneself clearly, both with oneself and with others. Moreover, it also strengthens the ability to listen to others, give them advice and opinions.

You can use it if you suffer from chronic fatigue during this period. First of all it reduces nervousness and also gives a good charge as well as the desire to fight, have fun and simply live fully every second.

Finally, on a spiritual level, it is a stone that promotes the truth above all. Helps to be more authentic, open and sincere with others.

It helps to leave out the masks and the fictions, so much so that, if someone wears a tendency to lie, it is said that he is not able to do it with her in contact!

All in all this stone is ideal for staying present in the Here and Now.

The Variscite stone doesn’t affect your wealth but it can help you become more secure and determined in your decision making.

Variscite stone is related to the Zodiac sign Aries and Libra.

Variscite has always been associated with jewelry, but not fine jewelry but ornamental jewelry, it is very associated with the sign of pound, and because it says that it helps keep the chakras and body energy in balance, is associated with increasing authenticity or bring out the true self of its bearer.

How to Purify Variscite Stone?

First of all it reduces nervousness and also gives a good charge as well as the desire to fight, have fun and simply live fully every second.

This aluminophosphate mineral was crystallized in an orthorhombic crystalline system. It was first defined in 1837 by August Breithaupt when he was in Variscia. It is a green mineral with a bluish hue, also sometimes it can have a red color. It has some color patterns.

It is regularly confused with some minerals such as turquoise, jade and chrysoprase.

The origin of the Variscite comes from the di-hydrated aluminum phosphate that in certain occasions is in the form of crystals. The solidity of this mineral on the Mohs scale is 4 to 5.

You can find deposits with enough Variscita in the province of Zamora (Spain). It can also be located in Germany, Austria, Czech Republic, United States and Bolivia.