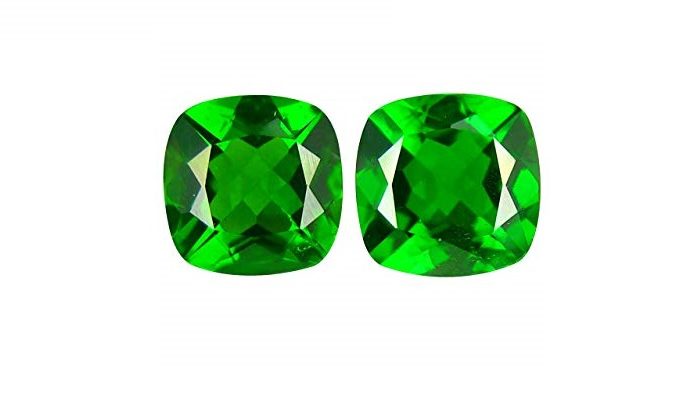 The diopside is a calcium and magnesium silicate. It is a pyroxene that is a single chain inosilicate. It could be presented in the colors: yellow, green and colorless.

It is transparent or translucent, with vitreous luster.

There is a variety of intense emerald green due to the chromium called chromo diopside.

There is also a violet variety, known as Violane, whose color is due to the presence of manganese.

We are going to talk about the meaning and symbolism of these stones and see how this powerful healing stone can give you protection and help.

Its name comes from the Greek “di” (two or double) and “opsis” (appearance, view) and is given this name around 1800. It is discovered in Brazil by the mineralogist José Bonifacio de Andrada e Silva, Brazilian politician and scientist, in 1800

If you have ever heard of the Russian diopside it is not another variety of chromium diopside, but it speaks only of its origin, it has the peculiarity that apart from the green color by characteristic chromium it sometimes has a slight bluish hue.

By 1988 he conquered the market, since this gem arrived from Russia very similar to the emerald and the Tsavorite was much more accessible.

The deposits are found in Germany, Austria, Finland, India, Madagascar, Myanmar, South Africa, Kenya, Sri Lanka and the USA. The violet variety, Violane, has only been found in a warehouse in Piedmont, Italy.

It can be confused with hiddenite and moldavite. Also with tourmaline and peridot. The chromodiopside with the emerald and the garnet tsavorite. Through physical and optical constants we can distinguish it without difficulty. No treatments are applied on the diopside nor is there any equivalent synthetic product. 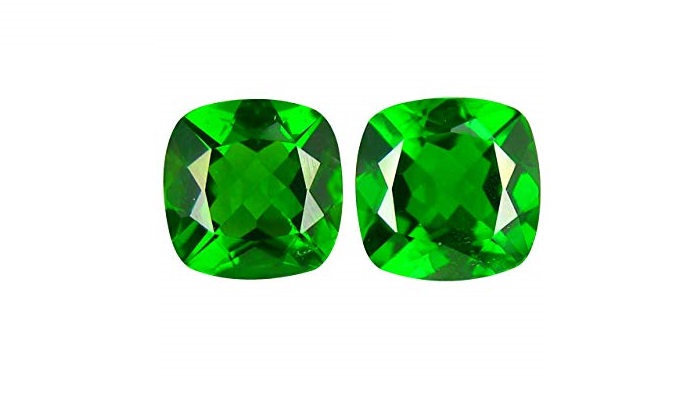 The diopside is presented in yellow, green, colorless, violet and black. The chromo diopside is always an intense green color. In ancient times it was believed that he had fallen from the tree of life, so the dead had to be buried with this gem to ensure reincarnation and return to life.

For the Greeks, the deposit star was a small star that had fallen to the earth and was trapped in the earth. It is also believed to be associated with peace and tranquility. The chromo diopside opens the heart chakra. It helps balance body and mind.

The diopside is one of the most abundant members of the pyroxene group. It is a magnesium calcium silicate with chemical formula CaMg (Si2O6).

This mineral owes its name to the combination of the two Greek words “di” (two or double) and “opsis” (appearance), as in many cases its crystals grow in two different directions. Rough diopside

This precious stone was first described by the naturist and statesman José Bonifacio de Andrada e Silva, in 1800. Until the end of the 20th century it was only considered as a collection stone.

However, with the discovery, in 1988, of important deposits of diopside chromium in Siberia, this gem began to have a greater impact on the gemstone market.

This diopside variety is also known with the equivocal term of Russian Emerald, because the quality specimens have a color very similar to this precious stone. Thanks to this similarity it is considered an alternative, with a much more affordable price, to green stones such as emerald, tsavorite, peridot or green tourmaline.

However, due to its low hardness, it cannot be considered a true competitor of the aforementioned stones. In addition, in large specimens, the green color darkens too much and moves away from the emerald green, thus losing its main attraction. For this reason the chromo diopsides that are usually sold, rarely exceed two or three carats.

It appears in crystals, sometimes very well formed, of various colors, elongated and rather flat. Light green tones tend to prevail, with dark green spots, emerald green (chromo diopside), violet (these stones are known as Violana), yellow and, even rarely, they can be diopside in blue or reddish.

The Chrome Diopside stone can help you become more stable and determined when it comes to your emotions, so keep this stone close to you if you have such problems.

The chromium diopside is a variety of a beautiful emerald green color. This intense green shade is due to the presence of chromium within the crystal structure of the stone.

Following its relatively recent discovery, in Russia, it has been marketed with great success as a gemstone that constitutes a lower-priced alternative to emerald and other more expensive green gems. On the other hand, its low durability is the biggest drawback of its use in jewelry.

This gem is usually mounted on pendants, necklaces, and especially on earrings, since the stones are relatively easy to match, because the crystals are usually quite uniform in both color and transparency.

Because of its already mentioned lack of hardness, it is less advisable to crimp diopside chrome in rings and rings. In any case, if you fall in love with a ring with this gem, make sure that the stone is mounted in such a way that it is as protected as possible.

Most of the chromo diopside that is marketed with gem quality is extracted from deposits in a remote Siberian region known as Inagli. The chromium diopside can sometimes be confused with stones of similar colors such as hiddenite, moldavite, peridot, emerald, verdelite, prasiolite, or tsavorite garnet.

The star diopside contains inclusions in the form of waters that are aligned and cut in such a way that they form a white star with four rays. A curiosity is that there are other stones that present this phenomenon of asterism, such as sapphires and rubies, but the stars are always formed by six rays, instead of the four typically exhibited by the Black Star diopside.

This gemstone is always cut in the shape of a cabochon because it is the size that best exhibits this phenomenon of asterism. Even being a stone with little durability, due to its beauty and originality, it is very common to find it in many jewelry designs. It is usually mounted on pendants, earrings, brooches, necklaces, bracelets and even rings.

It is usually carved in cabochon shapes and beads that once polished are very attractive. It is also used to make ornamental items, although being a rare material it barely has a commercial presence.

The Tashmarine diopside, which means ocean-colored stone, is light yellowish green and comes from a recently exploited site in eastern Uzbekistan. This term was recently coined by the company Columbia Gem House in Vancouver.

It is a variety of gem that was not known until very recently. In fact, it could be said that it is the first discovery of a precious stone in the 21st century since the first specimen was found in 2002. It appears in usually very transparent crystals with a hardness of 5.5 on the Mohs scale and in size that They range from 0.5 to 50 carats.

No gem quality make up only a small part. The best and most requested copies are those that are transparent and have a deep green color.

The diopside is a gem that can be cut both in cabochons and in virtually all existing faceted carvings. The most common sizes are oval, square, emerald, round, pear and cushion. With the exception of the stones with a really clear tone, the diopside is usually carved in small sizes to avoid the undesirable darkening of the gem. These stones, in large sizes tend to adopt an almost black color.

It is not a gem that is easy to carve. The lapidary will have to be very careful when working the stone because due to its good exfoliation any uncontrolled cleaning can result in a breakage of the gem.

In ancient times, some people believed that the diopside had fallen from the tree of life and, therefore, the dead should be buried with a diopside to ensure the renewal of life.

In some cultures the green diopside was associated with peace and tranquility and was placed on the forehead before resting, in order to ensure sweet dreams.

The Chrome Diopside Stone is linked to the Zodiac signs Aries, Capricorn, Scorpio, and Pisces.

People born under these signs can get their best potential out of them by carrying jewelry made out of this stone.

For the Greeks, the diopside star was a small star that had fallen to the earth and was trapped in the earth. It is also believed to be associated with peace and tranquility.

The chromo diopside opens the heart chakra. It helps balance body and mind.

How to Purify Chrome Diopside Stone

The Chrome Diopside stone needs to be carefully handled during exfoliation and any uncontrolled cleaning can result in a breakage of the gem.

The Diopside is also known as “the crying gem” for its alleged ability to alleviate traumas through purifying tears.

Already worked by the ancients as Precious Stone to decorate jewelry, the Diopside, especially in its starry variant, has created various beliefs around it.

The ancient Greeks, for example, believed that the Starry Diopside was a small bright star, turned into stone at the time of falling to the earth.

The stars of the sky would be reflected in its brightness.

The diopside is one of the most abundant members of the pyroxene group. It is a magnesium calcium silicate with chemical formula CaMg (Si2O6).

This mineral owes its name to the combination of the two Greek words “di” (two or double) and “opsis” (appearance), as in many cases its crystals grow in two different directions.