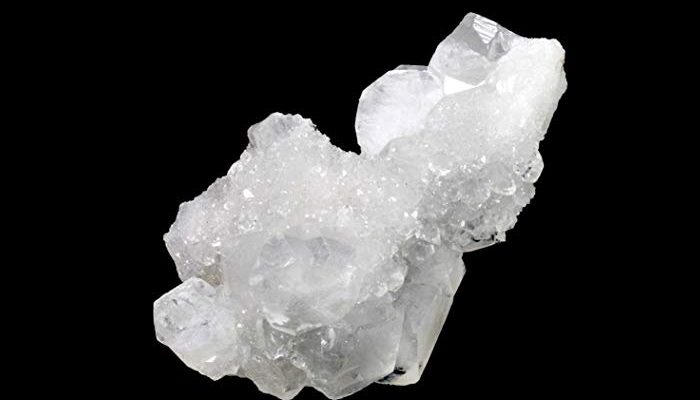 Apophyllite, A stone very similar to quartz, formed by a derivation of silicates, the most abundant combination of elements on the Planet, formed by silica and oxygen; a stone that constitutes a conglomerate of different crystals that are grouped into a single structure. It can usually be found in whitish colors, although it can vary due to the presence of other elements in the mineral.

The use of apophyllite is mostly oriented to the use of its healing, metaphysical or even Meta scientific properties.

In today’s text, we are going to talk more about the healing properties of this stone and how we can use it in different ways.

An Apophyllite is a stone very similar to quartz crystal, of hydrothermal origin, colorless or weakly red, sometimes yellowish, brownish or greenish and transparent. The apophyllite has vitreous luster, pearl at the base, and a characteristic light from which its commercial name derives: fisheye.

Of the class of silicates. Normally white, yellowish or with green, bluish, reddish, orange or pink tones. In cubic or pyramidal crystals, we can find them forming conglomerates or small crystals.

The main apophyllite deposit is in Poona, (near Mumbai, India). There are also deposits in Germany, the US, India, Brazil and Australia.

It is very spiritual, empowering and transmitting energy and the Akashi record. Very similar to the respiratory system, especially in allergies, tissue regeneration related to this system (also skin and mucous membranes), maintained on the chest helps to stop asthma attacks. Put on the eyes rejuvenates them.

It releases repressed emotions, anxiety states, worries, fears, vanities and increases tolerance for uncertainty. It facilitates self-knowledge, introspection, and self-analysis (behavioral, errors, imbalances …). It is relaxing so it releases stress, mental blocks and negative thoughts, as well as reducing desire.

Apophyllite is a mineral similar to quartz in its formation and appearance, usually forming triangular or rectangular crystals, grouping several crystals into a single stone.

The brightness of this stone is vitreous, like quartz crystals, and even some of them, after being treated and polished, can resemble a “fisheye” as its processed form for jewelry is also known, although its use in this market is quite rare. 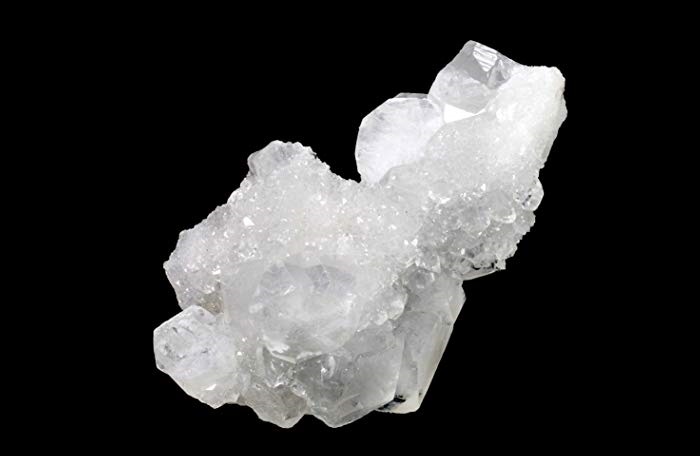 The base of the crystals that form it tend to have a pearly color, as it rises towards the top of the crystal the color can vary or even become totally crystalline.

This stone belongs to a branch of silicates; the phyllosilicates The minerals that correspond to silicates are those formed mainly by silica and oxygen, one of the most common combinations in Earth’s materials, approximately 95% of the earth’s crust minerals.

In the case of apophyllite, like a phyllosilicate, it is a mineral that is characterized, like all that fall into this category, for a leafy habit.

The habit, in mineralogy, is the way in which the external appearance of the mineral is shown at a simple or macroscopic view, which is determined, in most cases, by elements such as temperature, pressure, wind, rain, temperature, etc.

The name of apophyllite, or Apophyllite, has like many other minerals, Greek origin, from which “apo” means: far, and phyllos means: leaf, referring mainly to the characteristic crystallographic habit of this mineral. However, you may be recognized by other names in certain parts of the world.

As we could see, this mineral is in the category of phyllosilicates, which in turn is a sub category of silicates. It belongs to class 9.EA.15 according to the Strunz classification, which catalogs crystalline minerals. The chemical formula of apophillite is a bit complex in chemical terms, (K, Na) Ca4Si8O20 (OH, F) · 8H2O.

The common colors of this mineral is mainly white, the rest, such as reddish, bluish, yellowish, greenish tones, among others, are due to impurities in the mineral.

It is a translucent and transparent stone, with a tetragonal crystalline system and a pseudo-cubic or massive crystalline habit. In the mineral graphic scale of hardness, the Mohs scale, the apophyllite has 4.5 to 5, which makes it a moderately hard stone, with a density of 2.37.

In general, when we talk about properties of a stone or a mineral, it is associated with the way in which it can directly or indirectly influence people’s lives.

Aspects such as luck or health, can be addressed, according to some, with the single use of a particular stone.

Over time, minerals have captivated people by a kind of mysticism that they enclose, the beauty and rarity of these stones have caused people in different cultures to attribute properties and benefits that many claim, are real and that of In fact, they claim that these have had a real effect on them, so that the believing community in these minerals, as beneficial elements.

Apophyllite is a stone that has properties and benefits, which is why it has been widely known in the market.

In the case of this stone it is said that it serves to treat psychological and mental conditions such as anxiety, stress, worries, fear, while helping to reduce the anguish and pressure caused by situations that alter the feelings of person; The reason why acquiring and using it for this purpose has been one of the growing markets for apophyllite.

Healing properties are attributed properties such as: treats anxiety, worries, and fears.

This stone is also said to undo internal pressures and anguish. It is also a powerful intensifier of feelings.

The apophylit brings more light into the subconscious and reveals in the soul congestion, which we have actually not yet recognized as a blockade, or repress the subconscious. It gives more confidence and courage for new life situations.

Apophyllite causes thoughts and desires that have fallen out of balance to be regaled and its wearer to return to a happier, happier life. Apophyllite makes people more sociable, happy, and makes their wearer better able to cope with difficult life situations.

The Apophyllite gives inner security, more peace and serenity. Relief from external pressure and feelings of guilt, solution of masks and patterns. He brings back serenity, equanimity and a bit of innocence. If you make yourself stress, overburden yourself too much and on top of that can still take advantage of it, you should definitely try with apophyllite a try.

Apophyllite is not in the sense of a stone of purification, it could be called rather as release or liberation stone. He helps letting go of arrests and separating from everything that does not belong to one’s own being. It leads to simple, honest simplicity, but also to openness. Aware of guilty conscience, worry, anxiety and insecurity.

It is useful for respiratory asthma. He is a gentle heart stone, it activates the heart and supplies it with more oxygen. He is also said to be effective against paralysis of the muscles and motor nerves help and prevent this.

He can also positively influence muscle atrophy and nerve disorders. Apophyllite is a special stone in paralyzing the muscles. It is an important healing stone for the treatment of cardiac arrhythmias and dissolves deposits in the veins. He also helps with respiratory ailments.

Wear on the skin or put on affected areas, in order not to be so upset about my PC is always a small Apophyllite on the monitor, another is located at the head under the bed, which helps to shut down very fast and fall asleep.

This stone is said to have the ability to help heal asthma and other respiratory ailments. Apophyllite also has a very positive influence on our skin and mucous membranes. He also alleviates allergies. Likewise it is usable for the regeneration and relaxation of our nerves.

He should even have a helpful effect on depression. He should also apply to various neurological diseases. For example, he is also very useful for pain of the muscles of the jaw or for neuralgic facial pain. Finally, it is said to have a positive effect on our heart muscle and blood vessels.

The main apophyllite deposit and from which the greatest amount of this mineral is extracted, is found in the mines of Poona, in India, very close to Bombay.

India is the main operator of apophyllite thanks to this mine, so exporting it is one of the important economic activities in the area.

In the United States, Australia, Brazil and Germany, it is also possible to find deposits of this stone, with some differences between them with respect to the impurities that the rock has as a result of the soil in which they are formed.

The exploitation of apophyllite is an industry that has progressively grown and part of this process is due to the interest that the stone arouses in these aspects. For now, the apophyllite is a stone that is worth knowing and why not acquire.

It will be on the part of its users and their experience, the recognition of the properties and benefits for which they have reached the status they currently have.

In recent years, apophyllite has become a stone that has gradually gained popularity in the market of crystalline minerals, it is a stone with different characteristics but above all, a stone that for many, is a tool to achieve a healthy state in the mental, emotional, physical and spiritual aspect.

This stone is linked to the Zodiac sign Libra. People born under this Zodiac sign can experience a lot of beneficial properties thorough this stone.

It relieves cramps in the nervous system and is a relaxing therapy stone for the soul.

How to Purify Apophyllite Stone?

Apophyllite is available as a crystal or crystal group. Particularly beautiful apophyllites are native to India.

Among the apophyllites, the green apophyllite is the strongest protective and healing stone. This should be unloaded once a month under running, lukewarm water and cleaned.

After cleaning, the apophyllite should be charged together with green tourmaline or aventurine for several hours in a glass of water, or on a rock crystal group.

Apophyllite has relatively few deposits compared to other minerals of this type. This stone is usually associated with granite and its deposits are usually found near basalt deposits.

This mineral stone can be worn directly on the body. It is also recommended to place different crystals in the room.

So should already be able to adjust to the meditative consideration positive feelings. In case of acute asthma attacks, direct application of the stone on the chest should be helpful. Caution: Do not forget the usual emergency measures!

This mineral stone is also suitable for direct contact with water. A gemstone water made with it should be able to develop a strong effect. Under running, lukewarm water the apophyllite can be discharged. You can recharge it by placing it in water with a rock crystal, aventurine or green tourmaline.