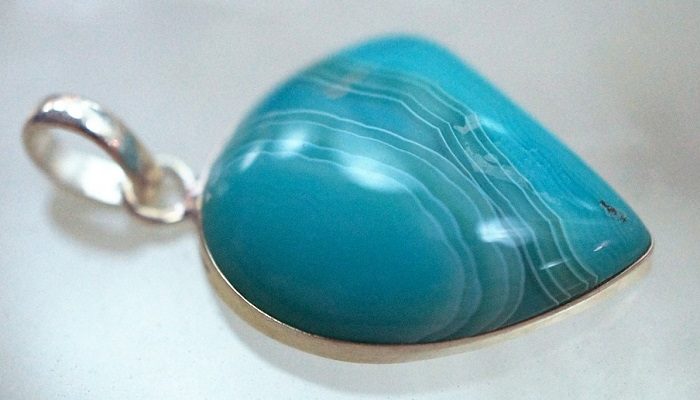 Agate is one of the most important protective stones. He keeps negative energies away and leads to inner balance. Agate healing stones can bring forth ideas and help with many mental and physical ailments. Healing stones were already used in antiquity, and even Aristotle knew about the effect of the stones.

Today, healing stones are mainly used in naturopathy. The healing stone agate works slowly, but unfolds a tremendous power. As a protective stone, it strengthens self-confidence, promotes self-acceptance and gives comfort. Everything about the agate effect, its properties, its meaning and the application is now available to you.

The healing stone agate, agate or eagle stone is assigned to the chalcedony quartz and belongs to the mineral class of oxides. The healing stones are formed by superimposed quartz layers, which are located in the cavities of rocks. Eagle stones consist of several layers, which are formed by various quartz variants and inclusions such as chromium, manganese and iron. This is how various stone colors, shapes and patterns develop.

Agate healing stones were already used in antiquity as protective stones or as elements for works of art. The name of the previously known as onyx semiprecious stone probably goes back to the river Achates on the island of Sicily, as he found written mention in this area before Christ. The ancient Egyptians made of agate healing stones scarab as a lucky charm. In the middle Ages, people believed that the protective stone made them invisible and thunder and lightning. The wealthy citizens of ancient Rome carried agate slices to help them gain more power.

Even today, the agate has a great importance and is one of the most sought after protection stones ever. The more popularity the healing stones gained, the more they were artificially changed. Due to its diverse types and forms of grinding, numerous variants and trade names exist. The agate is attributed to a strong healing effect in mental or physical complaints, such as a protective stone for pregnant women or as a consolation in separations.

Agate has always been a very sought-after jewelry and healing stone, from which many works of art were made in antiquity. His name probably goes back to his first site, the Achates River in Sicily.

There he was already mentioned long before Christ by the Greeks in writing. But even in ancient Egypt, the agate was known, because from him the coveted scarabs were cut, which carried as luck charms and protective stones of every Egyptian. Even in ancient Rome, wealthy citizens believed that agate slices gave them power and wealth.

In the middle Ages, it was even believed that this gemstone could make its bearer invisible, even thunder and lightning should be turned away from its wearer by the agate. The knowledge of the great importance of the agate as a protective stone has held until today and so it is still a coveted gem today. With the popularity of the gem, the stone was soon artificially altered. Already in Byzantium the colors of agate were intensified by burning.

Due to the worldwide localities and its variety of colors and shapes, Agate has many synonyms as well as trade names. Due to the different compositions, the individual varieties of the Agate, which are also awarded different healing effects? So he will ea. used as a maternity protector and is intended to provide comfort in separations, he can also help with diseases of all organs. Even Hildegard von Bingen recognized in the Middle Ages, the importance of the agate and described its positive effect against snake and spider venom.

The agate blue is one of the most important healing stones of all. In the comprehensive gem encyclopedia, even more than 400 healing stones are captured with images that can be searched by color, origin, effect, meaning, zodiac sign, etc. 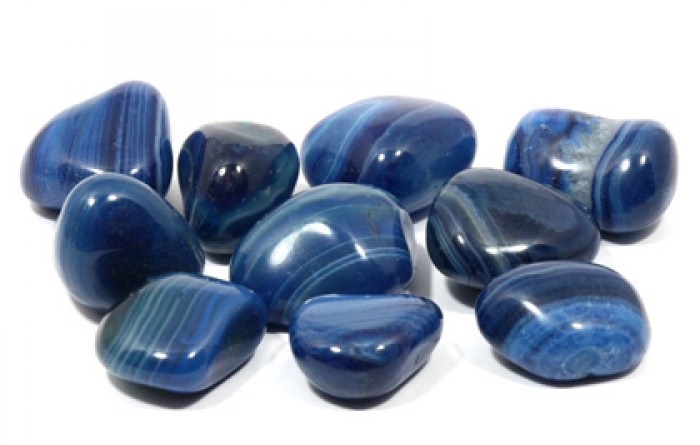 Agate is a banded stone and belongs to the group of chalcedony quartz. He is one of the mineral classes of oxides. It is formed by successively deposited quartz layers in rock cavities in which even cavities can remain. The individual layers are formed by different quartz variants and foreign inclusions such as iron, chromium and manganese. In this way, the different colors and patterns of the Agate come about and ultimately shape the individual varieties.

The agate can be applied in different ways. As a protective stone you should carry it as often as possible in all its forms, whether as an agate amulet, chain, or scarab. If, on the other hand, it is intended to have a targeted effect on an organ or a body site, direct skin contact is very important. Hold it as close as possible to the affected organ or directly on the body site.

The agate is also suitable as gemstone water for drinking, in order to develop its effect on the organs targeted. It is often recommended to take the gemstone water after the organ clock in order to achieve the greatest possible effect. For thirst alleviation, the agate can be taken in the mouth, and in case of speech defects, according to ancient custom, breathed several times a day and licked the topping.

Many people are barely able to cope with the high demands of private life and professional life. The healing stone agate helps in this area, increases concentration and promotes rational thinking. When you apply the healing stone, you improve your ability to define difficulties and find solutions faster. Agates strengthen the sense of reality, sharpen the view of the essential and lead to inner balance. This makes it easier to ward off bad influences from the outside world.

The agate effect on the psyche can be the following: Efficient stress control, Creativity, optimism, self-confidence, Solving tensions and emotional conflicts, Reduction of fears and nightmares, Sleep disorders, depressive moods

Even in physical suffering agates unfold their healing properties. The healing stones gently soothe stomach and intestinal complaints such as constipation, flatulence or heartburn. Even chronic gastritis can be relieved or rather healed under the influence of agate. The protective stone also strengthens the reproductive system, helps with abdominal pain and has a positive effect on hormone disorders. Also, connective tissue and lymphatic flow can be significantly improved by the use of agate.

Other positive agate effects on a physical level are:

For the powerful healing stone energy to achieve an optimal effect, you should wear the agate directly on the affected body area. If you suffer from mental problems, it is advisable to place the agate on your heart. To alleviate physical ailments, you can put on an agate necklace or an agate bracelet for an extended period of time, put the healing stone in your pants or jacket pocket, or places it directly on your stomach.

You should lovingly care for your agate and clean it at least once a month under running water. For unloading at night hematite stones are suitable (small magnetic stones), for recharging, preferably in the sun, the rock crystal is ideal.

To make an essence, you can also put the agate in water and drink the healing stone water. In contrast to externally used agate healing stones, stone water is able to develop its effect much more sustainable, because your body reacts to the forces of healing stones far more intense. The disadvantage, however, is that often an initial aggravation occurs. Therefore, agate healing water should always be used with all care.

This lucky and protective stone and can protect against bad influences or even depression. Set up as jewelry in the apartment, blue agate should be able to keep all evil from one. At the same time he can strengthen the willpower and make the handling of other people more sensitive. The blue agate is also said to increase interest in women when worn on the body.

In the realm of the psyche, the healing powers cause just as enormous. So he helps with sleep disturbances at night and even brings pleasant dreams. His power mitigates even the effects of moonlight. Even the Czarina Catherine the Great recognized the potential of the gem, which strengthens the self-esteem and restores awareness of one’s own body. The energetic soothing effect flows through the agate and relieves fears where they arise. Especially in the area of social anxiety he increases the sensitivity in dealing with people and thus improves the knowledge of human nature. Because of this, true friends can be recognized earlier. Separation pain becomes, either through the process of detachment from home or the separation of a loved one, the ordeal, and here too the agate protects and strengthens the wearer by willpower. A deep feeling of cautiousness and security arises.

The agate has a powerful healing energy. For it to achieve its optimal effect, direct body contact is very important. It is best placed directly on the affected area of the body. If emotional or psychological problems are to be overcome, it helps to put the agate on the heart.

In the case of physical ailments, the positive energy of the agate flows either by placing it on the affected area of the body or by wearing necklaces or bracelets. Even if the body contact is advantageous, the agate can be worn as a healing and protective stone in the pants or jacket pocket.

The agate is recommended as a star stone especially for ibex and bulls. As a healing stone he gives the ibex security and confidence. The bull is helped by the gemstone to realize its goals.

The effect extends to the physical, mental and spiritual level. Since the agate is available in many colors and varieties, it should be noted that some colors have special effects.

For example, blue gemstones have a pronounced effect on the throat chakra, while red to brownish agates act on the root chakra.

How to Purify Blue Agate Stone

It should be discharged once a month under running water and charged in the sun or overnight with a rock crystal. Chains should be unloaded once a month overnight with hematite tumbles stones. For the agate to be able to develop its effect optimally, regular care is important. It is recommended not to expose the gemstone to extreme heat or temperature changes. This can cause it to become stained. Specially brazed agates are susceptible to this staining.

To clean the gem, it should be discharged about once a month under running water. Chains with agates can be cleaned and unloaded in a bowl with dry hematite tumbled stones. It’s best to stay in it overnight. You can recharge agates by placing them in the sun or by night in a group of rock crystals. This will give the agate its positive energy again.

The agate can refer to an appreciation thousands of years ago. Already in Ancient Egypt jewelry and vessels were made of agate. About the emergence of the name, there is no secure knowledge. It is believed that the site of the first discovery of an agate of the Achates River (now Dirillo) could have been in southwestern Sicily.

Its importance as a jewel and healing stone was recognized early, and slices of the striped stone were used by both the Greeks and the Egyptians as a lucky charm. At times it was believed that the agate made its owner invisible, and thus could protect against lightning and thunder.