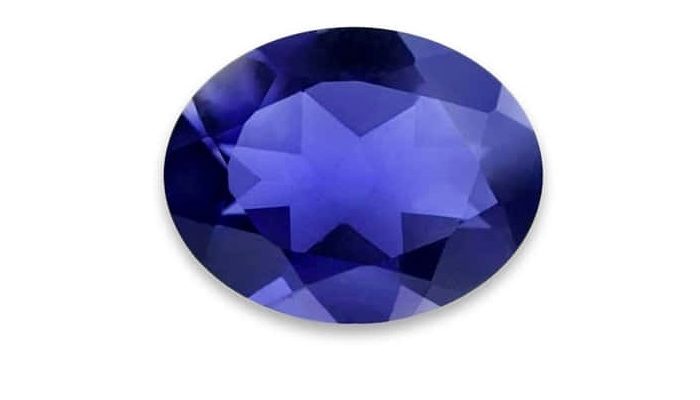 The Iolite, also called Cordierite, and obsolete Dichroit, is a common mineral from the mineral class of silicates. Because of its beautiful violet-blue color, which is often compared to the light blue sapphire, the Iolite is sometimes called a “water sapphire”. It was named after the French mineralogist P.L.A. in 1813. Cordier. This formerly called (1809) the mineral because of its two-, in reality tri-color (dichroism), dichroic.

The third name finally came into circulation, after the Greek “ion” = violet and “lithos” = stone.

The most important occurrences lie in Sri Lanka (Ceylon), India, Madagascar and Burma. Otherwise, they can also be found in Madras County, Canada, the US, and Southwest Africa. An interesting find for collectors is the Bodenmais in the Bavarian Forest. There are brownish, rarely blue Iolite, in collector’s qualities. Iolites are rare prismatic crystals, usually massive or in compact grains embedded in metamorphic schist or gneiss. They can also be found washed ashore as pebbles or small stones.

The mineral crystallizes in the orthorhombic crystal system and usually develops short prismatic crystals, or granular aggregates. However, it has already found crystals of up to half a meter in length.

The color is very close to that of the blue sapphire, but not so bright blue. A notable feature of Iolite is its pleochroism. He appears dark blue with violet impact seen parallel to the prism axis. If you turn it on the base surface, it appears almost colorless to pale yellow. Pale blue is close to the second crystal axis. Also found are brown, gray, green and purple stones. Despite its attractive color and popularity, it is not particularly rare and therefore affordable.

Physically, he should relieve the nerves and prevent psychopathic discomfort. He also has a positive healing effect on the stomach and the intestine. It is used for bloating, heartburn and vomiting. It is also said to strengthen the circulation and lower blood pressure. It prevents water retention in the body and counteracts varicose veins.

The Iolite is to give resilience and endurance. The powers of observation and sensitivity are particularly pronounced and should be well supported by the Iolite.

In doing so, the Iolite helps to switch back and forth between the sober mind and the inner inclinations and sensations. It makes it easier to stay in a responsible position emotionally and to do what is necessary, but to switch off after work and enjoy the privacy. He should also reduce anxiety and depression.

The Iolite got its gem name from the Greek. “Ios” means translated as violets, which is already hinted at the violet-blue color of the stone. And “lithos” means stone.

Originally, the Iolite was named after a famous French mineralogist. He called the Iolite Dichroit, which he attributed to the two-color of the gemstone (dichroism = two-color). There are testimonies according to which the Vikings already knew the Iolite. They acquired the stone in Norway and Greenland. They inserted thin slices of stone as a lens into their navigation devices. In this way they could watch the sun.

Also in the esoteric the Iolite finds its application for a long time. He is supposed to help in meditation to reach higher spiritual dimensions. 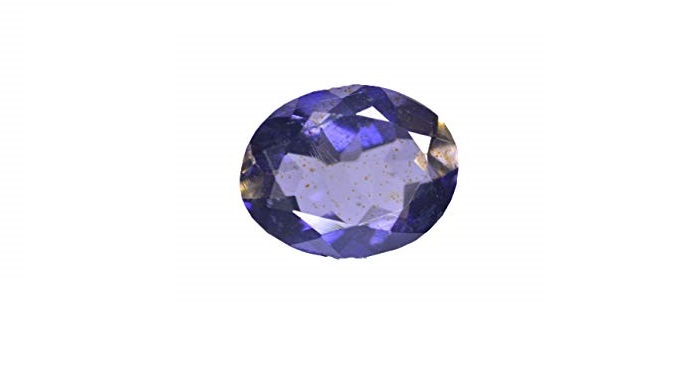 The Iolite belongs to the so-called cyclosilicates and is composed of the elements magnesium, aluminum, silicon and oxygen. The Iolite crystallizes in an orthochromatic crystal system. A peculiarity of the Iolite is its clear pleochroism.

Depending on the direction from which you look at the stone, it appears either blue or blue-violet or yellowish gray to light blue. Since the tanzanite gemstone has this pleochroism, it can easily be confused with the two gems.

However, the tanzanite is more intensely colored for the Iolite, which makes it possible to distinguish the two stones with the naked eye. The Iolite is sometimes referred to as “water sapphire”, because in terms of color it is very similar to sapphire (safir = spelling).

However, since it occurs much more frequently than the sapphire, it is also cheaper to buy accordingly. Iolites are mainly found in Sri Lanka, Burma, India, Canada, the USA, Madagascar and Southwest Africa.

The Iolite is also called Cordierite and also bears the name Dichroit. It is a common mineral and belongs to the mineral class of silicates. It is sometimes referred to as the “water sapphire” because its purple-blue color is often compared to the light blue sapphire. The third name finally came into circulation, after the Greek “ion” = violet and “lithos” = stone describing the color.

The largest deposits of Iolite are in Sri Lanka (Ceylon), India, Madagascar and Burma. Smaller occurrences also exist in Madras County, Canada, the US, and Southwest Africa. A find for collectors is the grounds in the Bavarian Forest. Here you will find brownish, rarely blue Iolite, in collector’s qualities.

Iolites are rare prismatic crystals, usually massive or in compact grains, found embedded in metamorphic schist or gneiss or also stranded as pebbles or pebbles. The mineral crystallizes in the orthorhombic crystal system and usually develops short prismatic crystals, or granular aggregates. However, it was also found crystals of up to half a meter in length

The Iolite Stone is a powerful healing stone that can truly help you restore balance in your relationship.

This stone allows you to see the mistakes you have been making in the past and overcome them in the best possible way.

The color of the Iolite is very close to that of the blue sapphire, but it is not so bright blue. The most striking feature of the Iolite is its pleochroism. It appears dark blue with violet impact when viewed parallel to the prism axis. If you turn it on the base surface, the Iolite appears almost colorless to pale yellow. To the second crystal axis it appears pale blue. Despite its attractive color and popularity, it is not particularly rare and therefore affordable. Also found are brown, gray, green and violet Iolites.

Physically, it would have a positive effect on the stomach and intestine. It is used in cases of bloating, heartburn and vomiting.

He should also relieve the nerves and prevent psychiatric complaints. It is also said to stabilize circulation and lower blood pressure. It prevents water retention in the body and counteracts varicose veins. The power of observation and sensitivity are particularly pronounced in the carrier of the Iolite and should be excellently supported by it.

In doing so, the Iolite helps to switch back and forth between the sober mind and the inner inclinations and sensations. The Iolite makes it easier in a responsible position to stay emotionally in the thing and do what is necessary, but to switch off after work and to enjoy the privacy.

The Iolite is also designed to provide resilience and stamina and reduce anxiety and depression. The average market value, i.e. the prices obtained in trade, jewelers, etc., is recorded and average prices calculated therefrom. These are dependent on the color, the stronger the color, the more expensive the stone. It is great against depression, fears, stress.

Iolite/cordierite gives you resilience and endurance. The powers of observation and sensitivity are particularly pronounced and are well supported by the Iolite. This stone helps more easily to switch between the sober mind and the inner inclinations and sensations.

It makes it easier to stay emotionally in a responsible position and to do what is necessary, but to switch off after work and to enjoy and enjoy the private life, without thinking about his duties or pondering about the experiences in the back of his mind.

Physically Iolite relieves the nerves and prevents psychosomatic complaints. The water sapphire penetrates very much into our intuitive thoughts and into the mind-controlling centers in the head.

He therefore monitors the general condition in the body and helps overactive and spirited people to a calmer and more harmonious life. Anxious people free the water sapphire from depression and often from the smallest request occurring stress symptoms.

He gives inner balance and thus lets us recognize loads and fears, which in the near future come to us in the form of guesses or threats. Fundamental decisions about partnership, change of occupation and future are answered quite clearly in the spirit for us with the help of the water sapphire.

Supports digestion and the entire gastrointestinal tract. Heartburn, bloating, bloating and vomiting can be treated with Iolite. Iolite strengthens the circulation and compensates for it. It also protects the mucous membranes of the intestinal musculature and is helpful in intestinal catarrh, intestinal stenosis and intestinal obstruction. It is a good protective and healing stone for the gastrointestinal area.

It also stabilizes circulation and lowers blood pressure. This relieves the heart and gives the kidneys more time to regulate the water balance. It prevents accumulation of water in the tissue, the skin and the brain and therefore prevents it. Varicose veins and edema can also be cured with it. It activates the function of the glands and ensures that the body is better supplied with minerals.

In ancient times, as far as the Greeks and the Romans, the water sapphire was valued as the true sapphire. He therefore found use in numerous pieces of jewelry of the time. Only in the middle Ages could it be established that the water sapphire has nothing in common with the blue sapphire from the corundum group.

Due to its rarity, however, the lolite was still valued as a coveted gemstone and healing stone. He received one of his names after the French mineralogist Cordier.

The Iolite stone brings you enough confidence to overcome every obstacle that ends up on your path. This stone makes you believe in your actions and not only see them as something you cannot achieve. You are meant for something great so why would you deprave yourself of it.

No special zodiac sign is assigned to this stone.

He connects the mind with the soul. His healing vibrations are particularly effective in the vegetative domain of thought and language. It gives us inner balance and thus reveals the burdens and fears that come to us in the near future in the form of guesses and threats. He clearly helps us to understand basic decisions about partnership and change of occupation.

How to Purify Iolite Stone

The water sapphire should be unloaded and cleaned once a week under running lukewarm water with regular use. Chains are recommended to be cleaned in a dry bowl with small hematite tumbled stones overnight.

Charging should not happen for more than one to two hours on a rock crystal group or an amethyst druse. Water-sapphire chains have the characteristics that they additionally charge while carrying in the sun and light.

The Iolite stone is not only a beautiful charm to wear around your neck or wrist; it can truly help you improve the quality of your life.

This stone gives you confidence and helps you become more certain in the decisions you are making.

When it comes to healing properties, there are many illnesses that these stones can help you cure. What you need to do is to believe in yourself and the healing powers of this powerful stone, and every issue you have is going to go away.

These stones should be cleaned as we explained in the above section of our article to get the full effect of every stone. This way you won’t allow the stone to get clogged up and unable it to help you with its healing powers. Wear this stone always close to your heart and you will feel its vibrations helping you.