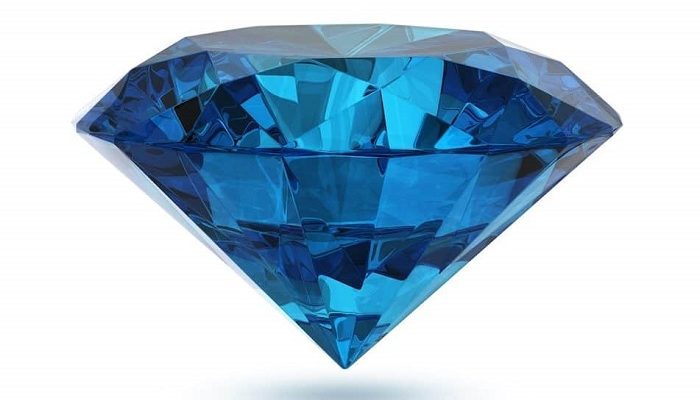 A very rare and exclusive diamond, is the blue diamond. Like black, this diamond is very scarce on our planet and we barely have stocks. It is a very strange variety but, precisely because of that, it gives us many properties.

The blue diamond is considered to be the ideal stone to help us meditate and explore our creativity.

Blue is a color that reveals our most hidden sensibility and, therefore, has always been related to the world of artists and the most creative people.

Therefore, the meaning of the blue diamond is related to creativity, to the discovery of our inner sensibility and to the mental-spiritual connection that we achieve thanks to meditation.

Since ancient times it has been considered that diamonds were very special stones. In fact, we know that the Greeks believed they were the tears of the gods. Instead, the Romans considered diamonds to be pieces of stars.

All this mythology is due to the fact that it is a stone of imposing beauty that cannot be compared to any other.

Today, the meaning of diamond is still booming. However, it has been given many meanings related to the spiritual and mystical world. Due to the uniqueness of diamonds, this stone has always been related to the will to succeed in life, with perfection and, also, firmness (that is, fortitude).

In addition, we must not forget that, as a precious stone, diamond has energy properties from Mother Earth.

Therefore, a diamond has the ability to balance our energy and also raise it to a higher level. It is a stone that can be healing and healing as it will help us to make the better of ourselves both externally and internally.

It is a completely natural crystal that is part of the quartz and has very specific healing properties: it helps to balance the mind and soul.

Therefore, the Herkimer is a stone that will help us to live in a more stable way, with a fixed purpose and with greater balance. 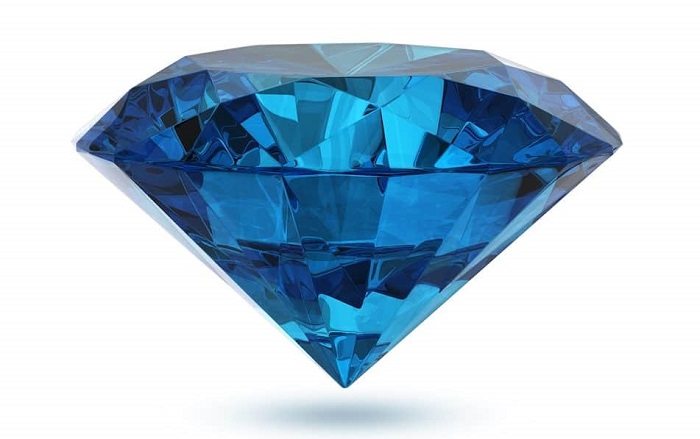 It is recommended to have this diamond when we are doing spiritual practices such as meditation. Its power and energy will help us achieve greater mental and emotional stability.

We continue with the meaning of the diamond to speak, now, of the blue diamond. It is a very peculiar variety and, in fact, is considered as an “anomaly” of nature.

In the eighteenth century we found the first witness of the existence of blue diamonds. It was the Portuguese who made this finding by baptizing the stone with the name “Carbonados.”

Over time, they realized that it was not an ordinary stone but that it was, neither more nor less, a blue diamond.

The meaning of this diamond is related to the seventh chakra. Therefore, it is also a stone that helps us unite the mind with the body. An object that will help us achieve greater spiritual and physical balance so that we are totally in harmony.

Blue diamonds, one of the most enigmatic gemstones in the world, have a very complex geological history. A new study tried to shed light on the origin of these extremely rare and valuable gems, which constitute only 0.02% of the total diamonds extracted.

These navy blue stones are part of some of the most famous jewels in the world, such as the Diamond of Hope, exhibited at the National Museum of Natural History in Washington. Aerial view of a diamond deposit in the Republic of Sakha, Russia. Billions of tons of diamonds are found inside the Earth.

The scientists analyzed 46 diamonds of this type, including a great South African gem sold in 2016 for 25 million dollars, and determined that they could have formed at depths of at least 660 kilometers, that is, to the lower mantle of the Earth. Small fragments of minerals found inside the precious stones indicated to the specialists the place of birth of the diamonds.

By comparison, about 99% of diamonds form approximately 150 to 200 kilometers underground, that is, much closer to the surface than blue gems. “These diamonds are among the deepest ever found,” said Steven Shireym, a geochemist at the Carnegie Science Institution, quoted by Reuters.

The blue diamonds crystallized next to the aquatic minerals that long ago were part of the seabed, but were sunk to great depths by the movement of the immense tectonic plates.

These diamonds acquired their color due to the action of boron. The new study found that this element was present in the ocean water and was incorporated into the seabed rock that for millions of years was descending to the depths of the Earth.

Diamond is not a love stone, although it can create strong bonds of common interests and joint ambitions, which can give stability and continuity to a couple or family.

In love, the diamond serves to dazzle and conquer, but the diamond tends to loneliness, observation and contemplation of triumphs themselves.

It is more a source of selfishness than of feeling and yet it is able to move the heart of the one who receives it as a gift, as well as to transmit the love of the one who gives it.

But we must know that the diamond does not attract love for itself, but the desire for possession and representation of an economic level.

One of the most luxurious and exclusive gemstones out there are diamonds. It is a stone that is considered indestructible and that has impressive formations and a brightness like no other.

Diamonds are also the stones that are most linked to the romantic world. And, many couples in love seal their love and commitment with a beautiful and precious diamond ring.

So, what is the meaning of the diamond so that you can know better all the symbolism that is given to this jewel of nature? Remember that diamonds are the hardest and strongest stones in the world. It is the densest substance we have known of our planet and, therefore, they have always caused a lot of fascination.

Within the meaning of the diamond we must also emphasize that it is a stone that is related to joy and positive energy.

Therefore, it has properties to overcome sadness, depression and get us to live in a much more optimistic and beneficial environment.

But we will analyze in more detail what is the meaning of the diamond according to the typology that we are. One of them is the one known as “Herkimer.” It is a diamond that is precisely in Herkimer (New York).

However, there is also a presence of this stone in other parts of the world such as Mexico, Spain or Tanzania.

This diamond is characterized by being very transparent. It is a quartz that usually has a hardness greater than the usual quartz. Due to its so transparent and bright appearance, this stone is one of the most impressive we can find.

We know that diamonds have been known since 800 BC because they were represented for the first time. The place that attests to this knowledge is India, a country whose kings looked beautiful and elegant diamonds.

The Indians also had their own theories about the meaning of diamond: for them, they were the result of contact between lightning bolts and rocks.

This is his field, all the material is dominated by the diamond, since he carries the fortune within himself and attracts all kinds of awards, recognitions, and business and, in general, everything that has to do with possessions and money.

When a diamond is carried on it, it acts like a magnet for luck. Money calls money and the diamond is money in itself, so it will always favor those who have more and little will give them to those who have less.

This is why it will always be related to the highest paid professions or important positions. Fame, glory, power and command are under its zone of influence.

This does not mean that it is a guarantee of happiness, tranquility or stability, since it can arouse other people’s envy and open internal fears.

The Blue Diamond stone is linked to the Zodiac sign Libra. You can wear this diamond on your jewelry in order to attract luck.

The meaning of this diamond is related to the seventh chakra. Therefore, it is also a stone that helps us unite the mind with the body.

An object that will help us achieve greater spiritual and physical balance so that we are totally in harmony.

How to Purify Blue Diamond Stone

To recharge and clean the stone, just put it under running warm water and clean all the dirt from it. You can do this once every month, and it is perfectly enough to keep your diamond clean.

To know the most mystical meaning of diamonds we have to travel through time to see the beliefs that our ancients had.

They were considered spiritual stones, that is, as if they were divine stones from the heavens or from the gods.

This made the meaning of the ancient diamond come to this day. And, in our present, the diamond is also related to the spiritual vision.

It is believed to be an object that allows us to improve our spirit and also break the barrier of matter.

It is precisely for this reason that diamonds are widely used in sighted consultations.

It is believed that its strength can help us understand and see everything unknown by the human mind. It gives us the ability to see beyond and connect spiritually with our surroundings.