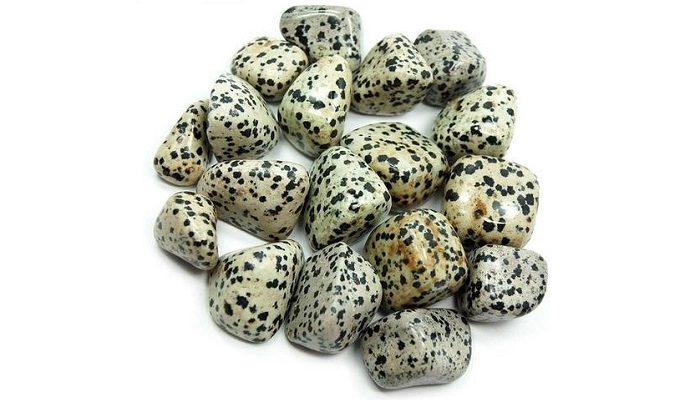 With the Dalmatian jasper I conclude my post tour on jasper varieties. The name of this stone can already make you understand its particular appearance.

However it is known as improperly Dalmatian jasper, it is much more correct to call it Dalmatian stone.

It is a crystal that can vary from light gray to beige-brown. It is made of quartz and feldspar.

The characteristic aspect that brings it precisely to have this name is the presence of black or brown spots, which are nothing but iron oxide or tourmaline.

Dalmatian jasper – is a white stone with black dots as on a Dalmatian (dog). Of Jaspers, plates are often made to have front fireplaces, such as table tops and as phase roofs.

It is also used extensively for mosaics and other similar artworks in stone. The jasper is dedicated to the Egyptian goddess Isis.

The stone is very stimulating, it gives you power, strengthens the intellect, protects against wounds and lowers fever. It also relieves birth pains.

It is said to drive away ghosts and protect the evil eye. The Dalmatian jasper helps you to see, acknowledge and understand your task and your problems. It strengthens your survival ability and your willingness to fight old thoughts and actions.

This stone is, in many ways, strong stones that work effectively and have a positive effect on virtually all disease images. Especially during periods where you lack strength and courage to live.

Jasper is considered the “mother of all gems” in the Bible. One jasper should be the foundation stone in the temple and in the city wall of the “Heavenly New Jerusalem”. The original name of the stone probably comes from the Oriental, in Greek usage, the Latin term “iasis” means as much as “speckled stone”.

Even in ancient times, jasper had importance as a coveted gemstone. The Greeks used the red variety as a love stone for pregnant women, while the ancient Egyptians wanted to increase their sexuality with jasper. 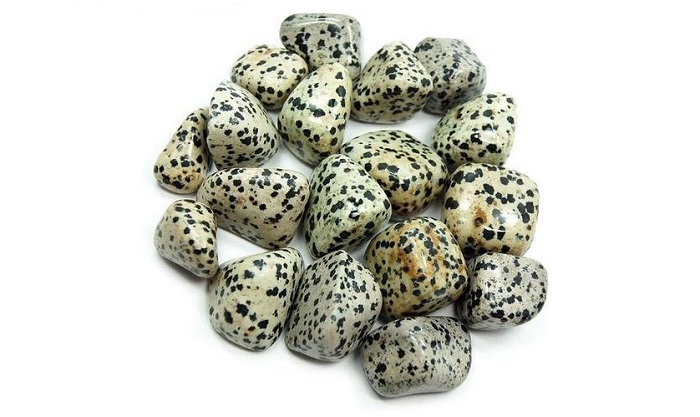 Even today, the red jasper is attributed sexuality-enhancing properties. In addition, the jasper is important for stress relief and should help to a harmonious pregnancy without discomfort such as nausea.

The strongest energy stone is the blood jasper, also known as heliotrope. The effect of this subspecies is extremely revitalizing and purifying for the entire organism. Jasper is today a commonly used jewelry and healing stone, but is also used in the production of vases, mosaics and table tops.

The jasper is a fine-grained quartz and rarely found in pure form. Mostly, adhesions with stones such as agates or opals show up. Also impurities of manganese hydroxide or clay often carry the stones with it. Jasper is formed by silicon dioxide seeping into the soil, which absorbs various impurities.

The quartzes are difficult to assign a precise color, since the stitch color is not constantly the same. The opaque stone with a matte greasy finish appears in color plays such as yellow, brown, orange, white, beige or red, often with unique patterns such as speckles or stripes. Jasper is mined in Brazil, southwest Africa, on the island of Corsica, in Siberia, Austria and Australia.

The stones can also be found in Germany, among others in Idar-Oberstein, Mühlheim, in the Harz and in the Erzgebirge.

In crystal therapy the Dalmatian jasper is famous above all for its function as a protective amulet. It is said that it also has healing properties. Its energy is slow but effective, ideal for those who want to work long-term on themselves. The Dalmatian jasper is said to make the playful spirit that each of us has inside stronger. It encourages you to be more cheerful and helps those who tend to be overly analytical in life to be more energetic.

If instead it is worn by a child, a calming influence is obtained. Use it if you want to think about something, if you have a project in progress and that you need to develop to the best of your ability. Not only that, it helps you to express them and share them with others. Use it if you want support during the first steps to creating a new business.

On a physical level the benefits are for the muscles, the tendons and also the cartilages. In crystal therapy it is also used to prevent muscle spasms in sufferers or to avoid the risk of distortions. It can also be used to treat various skin problems such as allergic eruptions.

Balance the energies. It is used a lot by those who want to work on their own confidence and those who practice tai chi or martial arts in general. If you feel you have lost your joy you can use it to stimulate the desire for fun in you. It is a stone that makes us emotionally and spiritually stronger.

This is because it strengthens the will and gives the necessary determination not to let oneself be taken by temptation. Use it if you want to attract, strengthen bonds and friendships. It is recommended for example if you need to protect your children from nightmares. You can use it if you tend to be cynical and skeptical, for example, and you want to work on your appearance.

It has a really decisive calming action. Excellent for pets, for example. I advise you to use it if you work a lot in contact with the dogs and if you take care of saving the abandoned animals. In fact, you can also use it for yourself, to overcome the irrational fear of dogs.

Use the Dalmatian stone to balance the first chakra. You must place it at the height of the first vertebra of the spine. It balances it and helps the body to become stronger and more resistant. Rekindles spiritual energy, helps to become independent without losing one’s roots and origins.

Since it is akin to the energies of the earth, Dalmatian stone is perfect for promoting stability and patience in your home. Considered perfect for harmonizing domestic energies, especially if you live near the mountains and plains. You can use all the brown crystals a little for this purpose.

According to Feng shui experts, it is associated with the north-east and south-west area of ​​the house or room. It helps you relax. Gives stability and security.

You can use Dalmatian jasper in meditation. It’s perfect just to get into a deep meditative state. It helps you maintain inner peace, promotes contemplation. It is a sacred stone to the Greek goddess of the earth, the goddess Gaia.

Likewise honor the goddess Diana, protector of animals and goddess of the moon. It is considered a stone of the seekers. Inside the crystal structure aligns perfectly with the human mind.

The Dalmatian Jasper stone can help you find balance in life and also in your relationship.

Decisive is the skin contact and the pleasant feeling. Since a raw mineral usually has sharp broken edges, it is only conditionally used for stone science and in the field of crystal healing.

Since the tumbled stone, in the production, requires only very little manpower, it is the ideal healing stone in the stone industry. Dalmatian jasper used in stone healing should never be dyed, irradiated or reconstructed! High-quality Dalmatian jasper, which is ideal for use in stone therapy, can be found in our shop.

Dalmatian jasper should help to set priorities, if you want to arrange individual steps to achieve a goal, also in the sense of setting priorities in the workplace. An effect is only possible with eye contact to the Dalmatian Jasper. It is best to set up the Dalmatian Jasper at a small distance and keep taking a quick look at it.

An assignment as a partner of the zodiac signs is rather uncommon for Dalmatian jasper. The assignment of gemstones to zodiac signs in horoscopes always causes confusion, since many a gemstone in which a horoscope is assigned to a certain zodiac, but is not assigned to the corresponding zodiac sign in another horoscope. The reason is simple.

Remove negative energies. Work on the base chakra and help to ground yourself. You should simply wear it if you tend to forget that you are not only flesh but also spirit.

It helps you fight addictions, especially smoking. Use the Dalmatian stone to balance the first chakra.

You must place it at the height of the first vertebra of the spine. It balances it and helps the body to become stronger and more resistant.

How to Purify Dalmatian Jasper Stone

Should be discharged after each use under running lukewarm water. Recharges overnight with a rock crystal.

The name jasper is derived from the Greek “iaspis” (speckled stone) and has its origins in the Orient.

In ancient times, it was a much sought-after gemstone among Romans and Greeks, who also used it as a healing stone. The Greeks believed that he gave inner harmony and women a harmonious pregnancy.

The Egyptians wore Jasper amulets and used this energy stone to increase their sexuality.

Likewise, massages with jasper can act as an aphrodisiac. He was even mentioned in the Bible and was considered the first of the foundations of the Jerusalem city wall.