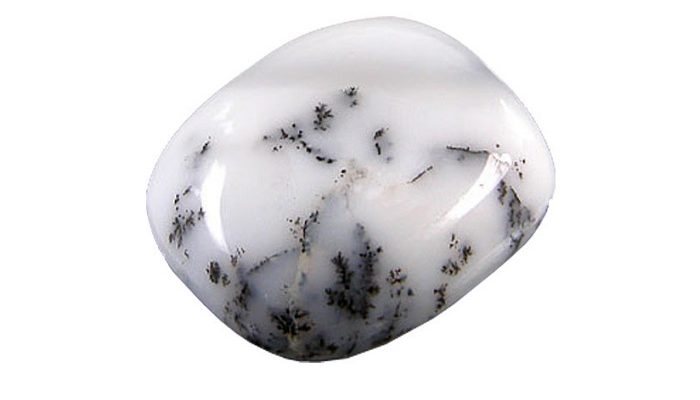 The ramifications that we can observe are a combination of quartz with manganese oxide, the psilomelana, that before was considered like a mineral of the class of the oxides minerals and at the present time is not accepted as a mineral by the International Mineralogical Association.

This stone was always considered more opal than agate, but I do not know at this point with the mixture of information, what to think.

So, I am of the slope that thinks, until it convinces me, that it is a noble common opal with dendrites.

Among many, it is indicated as opal not as agate and also several sites that I consulted specialized in opals, but as I said before, for tastes the colors. I do not usually trust the first web that I consult,

I usually visit a minimum of 5-6 sites and if I have the opportunity, some book, and they do not agree. Of course, these sites I consider reliable and they refer to the Dendritic Opal Stone as milk opal with dendrites.

As I read in some places, if you put a Dendritic Opal under your pillow when you sleep, you will have more rested dreams.

Honestly, I would not use it when we sleep, only when we meditate or when we want our mind to open up to other levels.

In the middle Ages it was customary to donate a necklace of opals to a blond teenager, because the opal was considered a guarantee that the color of the hair would not get darker or would have lost its brightness over time.

Thanks to the opal, which had a beneficial and maintaining effect, the damsels would have long blond braids even in adulthood. I use color with the same result.

But, of course, I don’t lack the light of opals, regardless of the state of my hair.

The most well-known opals of today are undoubtedly Australian opals. It is interesting to note that it is a quality that was previously unknown and consequently at the beginning, had some difficulty in establishing itself on the market since no one thought it possible that the intensity of the play of colors was natural. 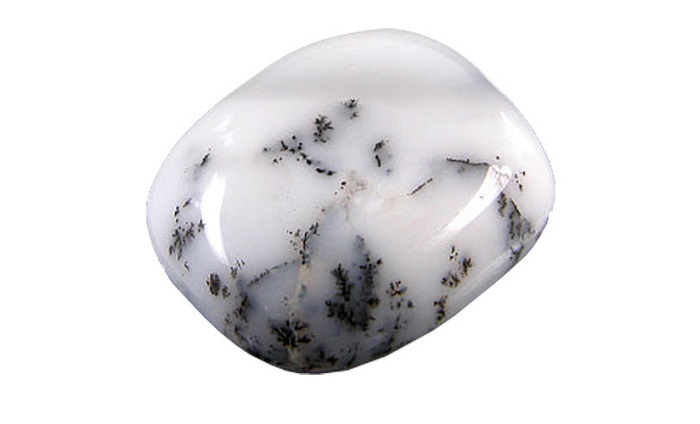 Let us not forget that the opals had fallen into disgrace in 1829 due to Sir Walter Scott’s novel “Anne of Gueuerstein”, which recounts the misfortune of her heroine Lady Hermione, who possessed a bewitched opal, who lost her strength and destroyed those who He possessed. The book was a best-seller and the opal, since then, became a bearer of “bad luck”, a “cursed stone”.

The negative fame was such that the opal market suffered a 70% drop. All this caused a book. Well, it was a time when incredible things happened because of the bestsellers, as for example it was also for the “Werther” of Goethe, which not only spread the fashion of green jackets in the young society of Central Europe, but even triggered a series of suicide attempts for love!

Let’s go back to our opals: it was almost 50 years after the first of the Australian opals appeared in London and, as I have already said, they were received with a certain skepticism.

Queen Victoria of the United Kingdom, who did not like the best sellers, who was not superstitious at all, but immediately understood the potential of the new gem from a of his colony.

Victoria encouraged the extraction, production and marketing of jewels and gave the example by wearing huge and beautiful opals set on sumptuous jewels, especially during diplomatic meetings, to encourage curiosity about the gem abroad. In fact, soon the Australian opal became the object of desire for all those who owned large collections of jewelry.

This meant a lot to Victoria! Until now, members of the British royal family wear high quality opals, which come from the Crown Jewelry Collection acquired by Queen Victoria.

The carries of this stone becomes more open, accommodating, but also strengthened in his opinion.

But opals can also reinforce negative feelings, which is why they should not be considered too often or for a long time.

One can also lose oneself in the colors of this stone, which can lead to life fatigue.

Also you can succumb to its beautiful shine, because not without reason, this gem is also considered the stone of thieves and spies. If there are negative feelings when looking at it, the stone should be discontinued immediately.

Opal is a mineral of the group of silicates and is related to quartz, perhaps for this reason leads to confusion.

In the case of some agates, they are directly chalcedonies: dendritic agates, moss or stone mocha, landscape agate, onyx or onyx, fire agate, sardonyx or sardonic, black onyx … they are chalcedonies.

There are certain specimens of opal with dendrite that contain chalcedony or white quartz, something that can also lead to more confusion.

I love it because it is the stone of duality, day-night, black-white, light-dark…but it is not something particular of Dendritic Opal, but of all our beloved white and black stones

. I believe that for this reason it has a special vibration and that it will allow us to have a direct communication with the elements, for that reason, it is ideal to meditate and when we want to get in touch with our spiritual guides. It is something obvious, by the magician Merlin and it is said that this stone attracts the power of those magicians and alchemists of other times, hence the name.

According to everything written above, it is logical that this opal resonates strongly in the Third Eye, since it is useful for us to achieve personal growth and as I said previously, connecting with our guides who are the ones who will help us to achieve it.

If you still have doubts about who you are and the goal of your life, Dendritic Opal can bring you light and understanding, since it is the first thing we must do to start having personal growth.

Observing our past lives is not always pleasant and easy, so we must be prepared and aware that some images can be somewhat disturbing and negative.

Remember that it is a very positive stone that will help you boost your creativity and therefore, your organizational capacity will increase because your mind will be balanced and you will have a clear vision.

By helping us to have a more open mind, it makes our intuition ascend to the highest level seeking psychic knowledge and in this way, favoring psychic visions, mediumship and also to access our Akashic Records (the universal memory of existence, it is where all the knowledge and experiences of past lives, the present life and what may happen in the future are stored, in Egypt it is known as the “Tables of Thoth” and in the Christian Bible, as the “Book of Life” “, In Islam as the” Eternal Table “and the Maya called it the” Psi Bank “).

Should be discharged regularly under running, lukewarm water and then charged for a few hours with a rock crystal.

Chains should be unloaded once a month overnight in a bowl of hematite tumbled stones and charged with a rock crystal. It should be stored in a bowl of water once a week overnight, as opals will dry out quickly.

This also means that they should never be placed in the sun as it dries up the opals. The result would be a fading of the stones.

Acids, soaps, make-up and perfume can also damage opals. In addition, the opals can be sprayed with water once a month. It should not be combined with any other stone in the application.

Mentally he acts by pure viewing and physically by placing on the affected body parts. Especially in the heart area, as a necklace, as Opal water or Opal tea. Can be used longer, but should be discontinued as soon as it becomes unfocused or absentminded.

Gemstone water is not recommended if the composition of individual stones is unknown. Often toxic materials can also be stored in the opals!

The Dendritic Opal stone is not linked to wealth or attracting money, so you don’t have to stress about wearing it with you when you go on business meetings or during the times of important investments.

The Dendritic Opal stone is linked to the Zodiac sign of Pisces. It helps members of this zodiac sign to become stronger and to embrace everything that is being offered to them.

The Dendritic Opal stone is not linked to any specific chakra.

How to Purify Dendritic Opal Stone

To clean this gem, simply put it under running lukewarm water and clean of the dirt from its surface.

In our comprehensive gem encyclopedia over 400 healing stones are captured with images that can be searched by color, origin, effect, meaning, zodiac sign, etc.

This dendritic opal makes our feelings stronger. The opal can make the carrier very happy by bringing him into harmony with himself. He thus increases the belief in himself, as well as the will for self-realization, but also associated acceptance, sense of community and the ability to communicate. Because when you are satisfied with yourself, you feel well in society.

That is also the reason why the Opal can help to find true love. Depression can also be alleviated by him.