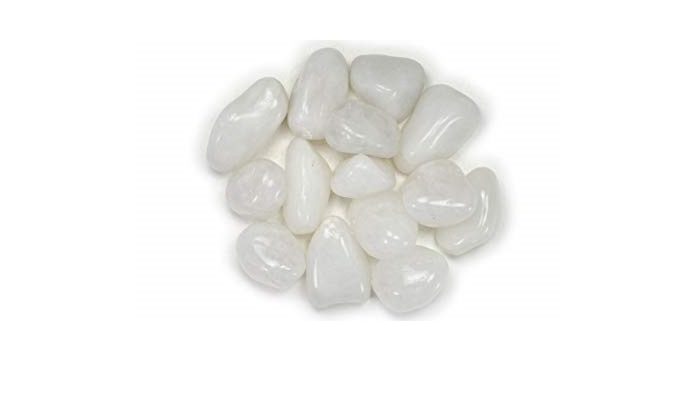 Milky Quartz, Quartz Milk or commonly called Milk Diamond is probably the most common variety of quartz and can be found almost anywhere in the country. The white color is caused by inclusions of tiny bubbles of gas and / or water. Its charming greasy luster is what gives it its charm and the characteristic that represents its milky and ghostly appearance.

This crystal works in the elimination of the negative energies and in the energetic settlement, helps to take away the physical fatigue giving more disposition. It gives us the support we need to learn our lessons in life and helps us to free ourselves from excessive responsibility and limitations. Milky Quartz enhances touch and cooperation as well as helping us think before we speak.

Quartz-Milky is white Quartz and can often be found near the roots of Rock Crystals. Milk Quartz regulates greasy tissue, protecting and taking care of the balance of fat in the blood through water or tea prepared with this crystal. Tiredness and lack of disposition are transformed into more vitality through the production of hormones; Milky Quartz activates the entire nervous system, blood circulation and respiratory center. Our body becomes more resistant against air pollution and environmental influences.

Quartz is the second most abundant mineral on Earth (approximately 12% vol.), Second only to the feldspar group. It has trigon crystalline structure composed of silica tetrahedral (silicon dioxide, SiO2), where each oxygen is divided between two tetrahedral. There are several varieties of quartz, some coming to be considered semi-precious stones. Today, rock minerals containing quartz are known to suffer from a lung disease called silicosis.

Quartz is usually born in granitic pegmatites and hydrothermal veins. Well-developed crystals can reach several meters in length and weigh hundreds of kilograms. Erosion of pegmatite’s can reveal pockets of crystals, known as “cathedrals.” It may also have metamorphic or sedimentary origin.

Additionally, it can occur in layers, particularly in varieties such as amethyst; in this case, the crystals develop from a matrix and thus only a terminal pyramid is visible. A quartz geode consists of a hollow stone (usually approximately spherical in shape), the inside of which is covered by a layer of crystals.

Nowadays, man lives surrounded by crystals on all sides. The main action of crystals occurs on a subtle energy plane, that is, at the origin of all things. And the basic process of crystal actuation is to absorb, store, transform, and radiate energy.

Therefore, the mere presence of a crystal in an environment or near the body is enough to generate a process of energy cleaning and renewal, as well as the magnification of the magnetic field. Rock crystals can be found in the form of druse, geode, aggregate, crystal-tipped shape (single point or double tip), rough, rolled or in spheres such as the legendary crystal ball.

The milky white stone occurs only where the rock crystal is found. It is also said to be the transitional product from rock crystal to the surrounding earth.

The milk quartz should only be charged near the rock crystal or the diamond. The Indians knew the strong healing effect of milk quartz. He was also often used in cloning to harmonize groups.

The milk quartz looks like an overgrown fat cell, and that’s where the spectrum of action lies. The milk quartz regulates the fat content of the blood, lowers high cholesterol and also helps to reduce unwanted fat deposits. This is done by brushing the fat deposits with a stone moistened with saliva twice a day. The milk quartz can also be dipped in good olive oil and then used as a massage stone. 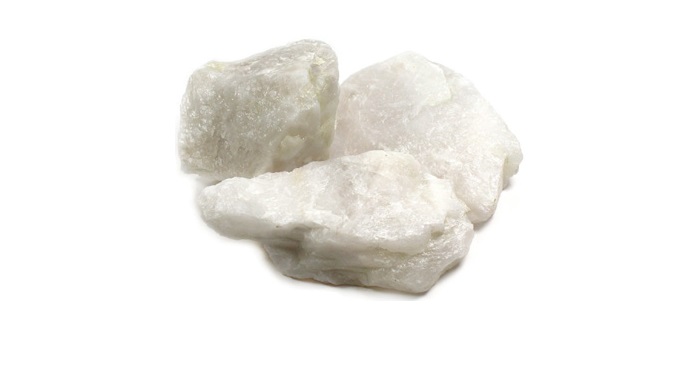 Put (different) milk quartz under the pillow. Milk quartz is also said to have beneficial effects on the entire hormone system. It is therefore also the stone for older people who want to stay active in old age. Because the milk quartz also has a good effect on the pineal gland, it can be placed under the pillow for sleeping.

The increased melatonin excretion helps to a good, deep sleep in which all repair operations are optimally performed. Mentally, the milk quartz has a purifying and harmonizing effect. One recognizes e.g. Problems more clearly and can cleanse them, without harm to environment and family.

The pure quartz inspires with its transparent clarity, its gloss of glass and the interesting crystal form. Particularly sought after is the clear quartz, as well as its colored varieties, for jewelry and quartz watches.

The gemstone is common all over the world and is therefore also mentioned in many cultures, such as rituals. But also healing and magical properties have been attributed to the crystal over the millennia. Round balls made of quartz, for example, are still common tools to look to the future.

Pure quartz without admixtures is completely transparent and has no color. Frequently, inclusions of liquids or gases cause a slightly milky haze. The quartz gets color when it contains colored minerals or is exposed to ionizing radiation. Possible then for example a violet coloring (Amethyst), a yellowish shade (Citrin) or a rose coloring (rose quartz).

The quartz can be found in many places as one of the most common minerals in the world. There are large deposits in Brazil and India, but also in Madagascar and in the US Arkansas. The individual varieties of the crystal also have their own, special sites. The ancient Greeks believed that the clear quartz was water that had frozen so deeply that it would never thaw. They gave him the name “Krystallos,” which means ice cream.

In the legends of ancient Japan, quartz was the breath of a white dragon and was considered a symbol of perfection. For the Australian Aborigines the quartz was sacred and was used among other things in rain rituals. In ancient times, it was believed that the quartz lives and takes a breath every hundred years.

Today the belief in the vitality of quartz among healers is still widespread. The age-old crystal is considered wise and should be able to communicate with people who are open to their messages. In gemstone healing, the gemstone is therefore referred to as the “universal crystal” and “master healer”.

Among other things, the stone is suitable for meditation, because it can open the mind and the heart for a higher guidance. Because quartz is also considered to be an excellent carrier of information and transmitter, it can amplify wishes and prayers and help with its manifestation. The quartz should also be able to neutralize energies and to ensure a smooth flow of these forces.

An interesting feature of quartz is its strong piezoelectric effect. Due to its very accurate and even resonance vibrations, the gemstone is used in quartz watches, computers and radio technology. The quartz is best cleaned under running water at a lukewarm temperature. To protect the crystal, it should not be in the water for long.

You get the milk quartz as a crystal group, single crystals, tumbled stones, flatterers, pendants, chain and rarely as donuts. For harmony, peace, peace, balance, clear thinking, loyalty, and vitality. A special effect can be achieved by applying an Apache tear with milk quartz tumbled stone together. You get a kind of Jing-Jang energy (balance, balance) that brings peace and loyalty into a partnership (family).

Due to its harmonizing properties on the body, the milk quartz also provides cleansing and clarifying powers for the soul. The ability of Milk Quartz to distribute the hormones finer and more equitably gives us greater levels of harmony, balance and inner peace. We give more trust, loyalty and true love to our fellow human beings. He keeps electricity and the energies of envious people from us. The milk quartz is a relatively unimpressive stone with great effect. It regulates fatty tissue and blood lipids and all associated disorders.

It harmonizes the supply of vitamins and activates the stomach, intestines, lungs and pineal gland. The glands are stimulated, as well as the hormone production of estrogen, Insulin, adrenaline and testosterone. The milk quartz takes away fatigue and listlessness and gives vitality. It activates the nervous system, the circulation and the respiratory center. Suitable for all common types of application.

For example, put on selected places or wear as jewelry in your desired shape on the body for a long time. Gemstone water made from this stone gives the aspects very well to us. As a chain, the milk quartz keeps away electro smog and bad energies of envious people. By milky crystal groups in the apartment a particularly considerate family living together.

It works best with Azurite, Emerald or Rose Quartz. The Milk Quartz has been referred to over the centuries only as common quartz, which never attained the so highly esteemed rank of its relative, the mountain crystal. Today, however, we know that in milk quartz especially healing properties are hidden.

The milk quartz acts on all energy centers of the body and is not assigned to any special zodiac.

The milk quartz is a harmonizing stone, which unfolds its power in litho therapy best in combination with azurite, emerald or rose quartz. During the meditation you will achieve a stronger sense of unity of the body with the spirit and the soul through the milk quartz. They feel how they flow into each other more fluently.

During the transition you will stumble across diseases and blockages, which you can now recognize and remove with the help of strong colored stones. During the meditation he gives us a stronger sense of unity between body, mind and soul. We can feel how they merge smoothly.

How to Purify Milky Quartz Stone

One should not fail to unload the milk quartz before and after the treatment under running lukewarm water. Chains and pendants worn on the body should be unloaded at least once a week, overnight, in a dry bowl of hematite tumbled stones.

If you want to do something good for your milk quartz, and then load it in a bowl with clear, small rock crystal tumbled stones overnight.

Quartz is one of the best crystals to start any treatment, or for anyone who is starting to practice crystal therapy because it is considered “Grandfather of Crystals,” promotes the flow of energy through all bodies aligning all chakras through vibration which reflects and radiates white light that contains all the rays of the color spectrum.

One of the main characteristics of this stone is the storage of information; this is the “brain of nature”. A minimal particle of crystal can contain infinity of information and an example of this are the computer chips, made of silicon dioxide, crystal.