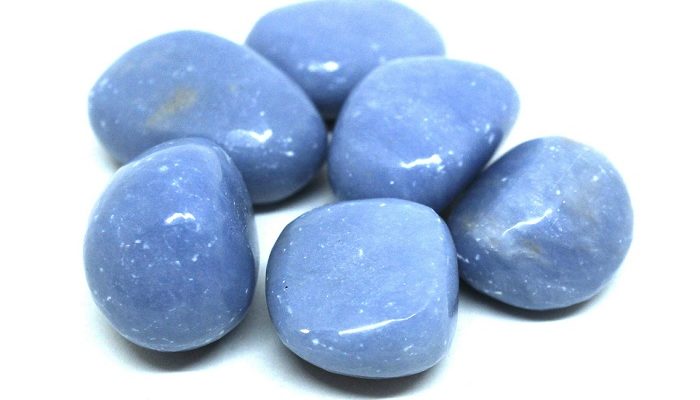 Angelite (angel stone) forms blue and white masses, nodules and crystals that sometimes contain a dash of red hematite. It was discovered during a harmonious planetary constellation in Peru and is considered a symbol of light and love in the world. He is very balancing, aligning and polarizing the physical body with the etheric network. It forms a protective field around its surroundings.

When taken as essence, it protects the physical body as with a shield. In agriculture, an essence has expelled insects.

Angelite is a transmitter and receiver, he intensifies telepathic communication and helps to facilitate the communication with the own Totem Spirit or to improve it. He helps with spiritual and out of body experiences by making the experience of flying second nature. He is an excellent stone to promote the understanding of astrological and mathematical problems.

It symbolizes world peace and the community inside and outside the galaxy. He is a stone of heightened awareness that generally improves communication skills. He dispels trouble, connects with the cosmic knowledge and helps to break away from limiting ideas, if you want to try something new.

It can be used to support rebirthing therapy and mental healing, and it opens channels for channeling. In transmitting energy during mental healing Angelite creates the connection between the psychic and the etheric energy field. Angelite was used against infectious diseases, hemoglobin deficiency and general reconstruction. It can be used especially for throat infections, stunted thymus and cardiac disorders. It contributes to the renewal of blood vessels and to improved sensory perception.

Anhydrite was known as a healing stone under the name Angelite and is recommended for astral travel. It was first described in 1804 by Abraham Gottlob Werner named after anhydrite. Its name derives from the Greek â anhydrosâ, as it turns into gypsum when it comes into contact with water.

Anhydrite is one of the most important healing stones in existence. An overview and description of the most important gemstones can be found in the article “Topical Healing Stones”. In our comprehensive gem encyclopedia, more than 400 healing stones are captured with images, which can be searched by color, origin, effect, meaning, zodiac sign, etc. The anhydrite or Angelite provides internal stability and safety and helps with extraordinary stress.

At the same time, it helps to increase ground clearance and to stop constant reflection. Angelite also helps against schizophrenia.

The Angelite comes, as its name suggests, from the Andes of Peru, has a hardness of 6 to 7 and belongs to the family of opal quartz. It occurs in the colors pink, blue-green, brown and white, whereby the differently colored stones are also assigned different characteristics.

Already with the Incas and Aztecs the stone had a special meaning: an eye of the gods, which was left by them, as they left the earth. From the point of view of these ancient tribes, he was a bone of hope, reminiscent of times of war, that humans, animals and nature belong together in harmony. Even today, this stone is in Peru as a protective and healing stone and is traditionally worn as jewelry. 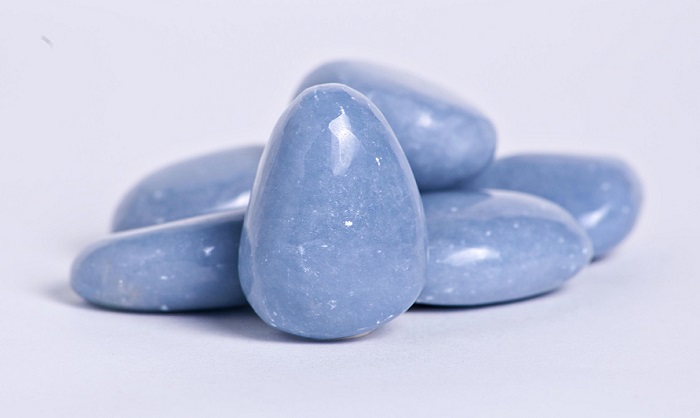 Above all, the pink Angelite is to drive away depressive moods and fears. In addition, he promotes genuine love, but he also adds to the desire for eroticism and sexuality. It gives spontaneity and joie de vivre and thereby helps one to get over the everyday life in a good mood and thus better to survive. The physical effect manifests itself in an improved function of the enzymes, but also helps in the prevention of worm infestations, mites and viral infections.

Generally it is known as a healing stone of the digestive system. Among other things, it relieves inflammation and discomfort in the stomach area, promotes metabolism and strengthens the liver, especially if it is damaged by toxins and alcohol.

The green-blue or greenish stone, on the other hand, has calming properties, dissolves mental blocks, strengthens the memory and, above all, helps to maintain or find peace during tests. He also has a positive effect on the body. It is often used in pulmonary complaints, as it alleviates allergic reactions of the lungs and bronchi. Generally one can say that the willingness of the body to react to something allergic is inhibited. It works particularly well on allergens such as animal hair, environmental toxins and dust

The brown-white Angelite combines the properties of the pink and the green-blue stone and also reinforces their positive properties when used together.

The white stone, on the other hand, is hardly said to have any special positive qualities for humans, but it can be used to suck out the negative energies accumulated in the other Angelites, and to purify them without having to discharge them.

Attributes promised to all Angelites, for example, would be the strengthening of one’s talents and expressiveness. In addition, the inner satisfaction is improved and reacts more balanced in stress situations, but also in the relationship.

The stones should be regularly cleaned with lukewarm, clear water and discharged. Not to forget is the regular extraction of negative energies. After cleaning, a charge in rock crystal tumbled stone is recommended to ensure a continuation of the positive characteristics.

The stones should always be worn with skin contact, for example as a necklace, pendant or bracelet. But there is also the possibility to use them as a flatterer. Especially in the green and blue Angelite this supports the calming effect in addition, since the fingers have something to do and this also distracts from the stress.

The Angelite stone has no effect on love life or relationships.

Anhydrite or Angelite is also known under its chemical name calcium sulfate. It is a commonly occurring mineral from the mineral class of sulfates with a hardness of 3 – 4. Its color palette ranges from gray, light blue to intense sky blue. Like gypsum, anhydrite is also used as a raw material for the extraction of sulfuric acid and as a building material (binder).

In the healing stone doctrine anhydrite is considered to be an assistant against mental stress, stress and insecurity. So he should provide peace and relaxation and patience. The anhydrite stabilizes us with strong mental stress. It is also a very good stone to earth us. The dehydrated gypsum, calcium sulphate causes stability, security and gives confidence in itself, supports a sober approach in psychologically tense and unbalanced phases of life. He helps to remember his own abilities, to go his own way, even if one then has to walk alone. A very stone-repellent stone, which helps with great mental stress and imbalance not hysterical but to preserve the nerves. Stabilizing so in case of extreme mental stress and should be to the prevention of schizophrenic relapses to the side.

Finds its use in throat complaints. It is intended to regulate kidney function and to stimulate and control the water balance. The anhydrite breaks down accumulations of water in the tissue called edema and the associated swelling. Wear on the body or on affected areas. Please do not use too long, because it is said that he then slow down the spiritual development. The anhydrite can be used as jewelry or pocket stone. Also suitable for use on affected areas.

The name anhydrite is translated from Greek to stone without water – referring to the fact that the mineral contains no water and thus differs from the chemical related and hydrous gypsum.

Anhydrite is a sulfate mineral consisting of CaSO4. The color of anhydrite is white or colorless, but may also be greyish, pink, purple, bluish (trade name Angelite) or light brown, depending on admixtures of various elements and compounds. The line color is still white in all cases.

Anhydrite crystallizes in the orthorhombic crystal system. The crystals are prismatic or tabular; occasionally the crystal surface is ridged. The aggregates of anhydrite may be fibrous, late, grapey, grainy or moderately rough.

Anhydrite has a greasy, pearly or glassy gloss; the transparency is transparent to translucent. The breakage of the mineral is splinter-uneven, the cleavage is very perfect. The Mohs hardness is 3 to 3.5 at a density of 2.9 to 2.99 g / cc. Anhydrite is a mineral of sedimentary origin, Anhydrite is a so-called deposit mineral that can arise primary, original and secondary from other minerals.

Primarily formed anhydrite is produced by the evaporation of water, in which naturally dissolved salts are. Optimum conditions of origin can be found in many lagoons or lakes separated from the seawater or from the fresh water supply. For the evaporation (= evaporation) of the water in addition to a low humidity and temperatures beyond the 30 ° C mark are required so that the evaporation of liquids in the dry air is optimal. Such conditions also prevail in hydrothermal veins or in the vicinity of volcanoes, where anhydrite is the product of so-called resublimation (exiting gases immediately go into the solid state, crystallize out, without the gaseous substances are previously liquid).

Secondarily formed anhydrite is formed when the hydrous counterpart gypsum (formula: CaSO4 · 2H2O) is progressively dewatered by the pressure of overlying sediments. The process of dehydration can be reversed by the addition of water – along with a volume increase of the former anhydrous anhydrite by up to 60%. As a result of this growth in size, gypsum is able to formally break up once anhydrite-containing rocks. The occurrence of anhydrite is accompanied, among others, by calcite, quartz, barite, cryolite, gypsum, sulfur, celestine, dolomite, halite, chambersite and magnetite.

In addition to being used as an aggregate in cement and other building materials, anhydrite powdered is also used for the production of ceramics. Furthermore, sulfuric acid is obtained from anhydrite due to the sulfur contents. Part of the mineral also serves the interior design.

Anhydrite melts when heated; at the same time the flame turns red. In water, anhydrite dissolves only with difficulty, but a crystal enlargement (gypsum formation!) Is observed. Partly shows in anhydrite a pale yellow to pink or colorless pleochroism.

The Angelite stone has no effect on wealth or money issues.

The cancer, the fish and the scorpion assigned but of course also usable by all other signs of the zodiac.

The vibration of anhydrite penetrates best through the throat chakra in our organism.

How to Purify Yellow Calcite Stone

Clean once a month only under running, lukewarm water, but better with hematite and discharge. Make sure that the stone is quite soft and therefore easily vulnerable. Anhydrite has the property that it not only cleans and discharges under the water, but also absorbs new energy at the same time.

One should not energize it in the sun, but once a month at rock crystal again. Please make sure that anhydrite should not be associated with water for too long. Cleaning under running water should never take more than a minute or two, as otherwise the stone changes or even dissolves.

The blue anhydrite is a sedimentary mineral that can form both massive layers and nodular or granular aggregates. From an mineralogical point of view, anhydrite is an anhydrous calcium sulfate.

The name anhydrite derives from the Greek. “Anhydros” means “water-free”. The blue Angelite Anhydrite is not formed directly, but is caused by the drying out of the mineral gypsum. This reduces the volume and the density and the Mohs hardness increase. Although anhydrite is quite common, really good samples of the mineral are very rare and found mainly in Peru and Mexico.

Only these show the pretty, blue color, which gives the anhydrite the epithet Angelite, which should mean something like the “angelic”. Please always keep your Angelite Anhydrite as dry as possible. Only in permanent, high humidity, the anhydrite can absorb water and swell by about 50%. Anhydrite slowly transforms back into the original mineral gypsum.