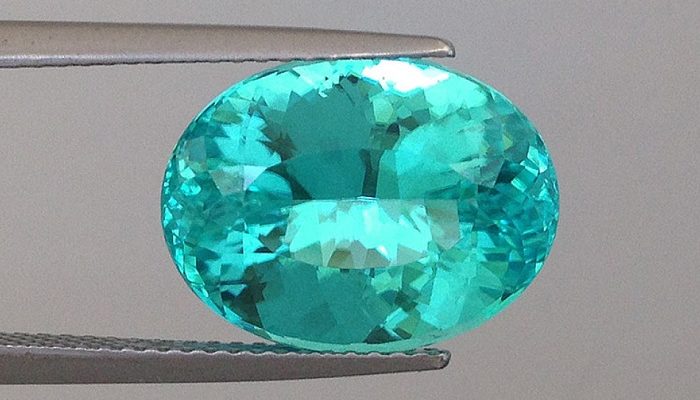 The Paraiba Tourmaline is considered a particularly beautiful variety of Tourmaline. Due to the high metal content in the stone, it shimmers in intense colors.

Especially the deep blue and green are very popular as gemstones.

But the Paraiba Tourmaline, which takes its name from its locality of Paraiba in Brazil, is unique.

Although tourmalines are very common, this variety has not yet been found in comparable quality. The Paraiba tourmaline was mined only on a face in Brazil, whose source has already dried up.

The gemstone is thus rarer than the diamond, which has also driven up the value of the stone enormously.

The name godfather of the mineral Paraiba tourmaline is like many other minerals also the type locality – the place where a mineral was first found. The first Paraiba tourmaline was discovered in 1987 in São José da Batalha in the eponymous state of Paraiba / Brazil.

The color of Paraiba tourmalines is very diverse and ranges from emerald green and mint green to teal, turquoise to dark violet (comparable to the deep violet of Deep Russian amethysts) and blue.

The bright, vibrant colors of Paraiba tourmalines are unique among all tourmalines. The reason for the color are admixtures of manganese and copper. Depending on the ratio copper: manganese varies and changes the color of the mineral. If the copper values ​​are higher than the proportions of manganese, the Paraiba tourmaline presents itself in aquatic, turquoise shades. On the other hand, if the manganese contents dominate, violet to bluish colors result. 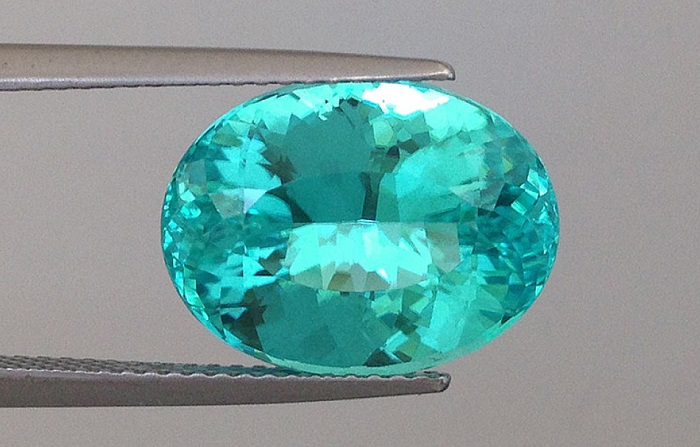 The largest crystals of Paraiba tourmalines are found in African Nigeria. The rough stones sometimes weigh up to 50 carats.

Tourmaline is a group of minerals composed of different mixed crystals but similar in their structural arrangement. The diverse varieties with the different chemical compositions come about through different ways of producing. Tourmaline forms primarily when acid magma with high levels of boron meets adjacent rocks.

The type and composition of the rock plays an important role. Tourmaline can be hydrothermal, pneumatolytic or ptygmatic. It forms microscopic to large crystals that can reach sizes of several meters.

In addition to its variety of colors, its crystal form is another special feature of tourmaline. He belongs as borosilicate to the mineral class of silicates.

The deposits of Paraiba tourmalines are bound to copper- and manganese-containing pegmatites (for further information see: The formation of minerals). Although there are numerous pegmatite occurrences worldwide, so far only in three countries are very rare mineral occurrences known.

Paraiba tourmalines are minerals of utmost rarity and therefore enjoy not least as a mineral for collections or for high-quality real stone jewelry.

Paraiba tourmalines are exquisite minerals that have their price. Above all, the rarity of the mineral is the essential quantity that determines the price of Paraiba tourmalines. So even the smallest specimens on the gemstone market are traded at high prices.

Usual are in particularly beautiful Paraiba’s with strong colors (so-called AAA Paraiba Tourmaline), a high degree of purity and a very high quality of the cut $ 10,000 to 50,000 per carat. Especially multi-faceted Paraiba tourmalines are considered more valuable than stones that are held in a simple cabochon cut.

Also influencing the pricing of Paraiba tourmalines has the fact that the e valuable minerals are not mined by machine, but be mined in laborious manual labor. Despite the high quality, Paraiba tourmalines undergo some refining; less to change the color, but by careful heating, the purity, for example. In the form of inclusions of gas bubbles corrected.

Another factor that is reflected in the price. Untreated stones have a higher value than treated Paraiba tourmalines.

The Paraiba Tourmaline gives you confidence and makes you feel on top of the world. This helps in all life situations, especially with emotional problems.

The Paraiba tourmaline is one of the most important healing stones of all. The tourmaline is best worn directly with skin contact. When laying on the direct body contact is also important. Some healers even recommend sticking the stone to the affected area. When destroying scars, the tourmaline is spread over the scar, which is to remove the excess energy from the scar.

As gemstone water, the tourmaline is, depending on the variety and desired effect, best taken at the time of the organ clock. However, the Paraiba Tourmaline should not be used too long for a healing effect, as its energy goes out quickly.

Meanwhile, even in eastern Africa, or more precisely in the Mozambique tourmaline – already known as a tourmaline site – blue tourmaline, greenish-green, greenish-yellow, purple, purple and pink were discovered. Compared to the finds from Nigeria, the tourmalines from Mozambique have even better colors and qualities.

This means that since the colors, the gemological properties and even the geological environment are almost identical, the corresponding specimens from Africa can also be called “Paraiba Tourmaline”.

In fact, almost all of the Paraiba Tourmalines available on the market come from Mozambique, not from Brazil.

Paraiba tourmaline clears up confusion and gives a strong sense of justice.

In addition, this healing stone facilitates the making of difficult decisions and thereby promotes life experience. But he can also intensify dreams.

The Paraiba Tourmaline is linked to the Zodiac sign of Aries and Leo.

The root chakra is especially under influence with the use of Paraiba Tourmaline stone. Use it to get rid of the negative energy from this part of your body.

How to Purify Paraiba Tourmaline

Should be discharged once a month under running water and placed in the sun for a few hours to recharge.

Tourmaline is available in virtually all the colors of the rainbow. For a long time, however, there were no specimens in bright turquoise – until the valuable deposits in Paraiba, Brazil in the 80s was discovered.

In fact, a fairly large part of the weight of Paraiba tourmaline is due to copper.

As beautiful as the tourmalines from the Paraiba mine in Brazil, however, were so quickly the supply of mostly very small stones unfortunately also exhausted. This makes the Paraiba tourmaline a true rarity and extremely valuable.