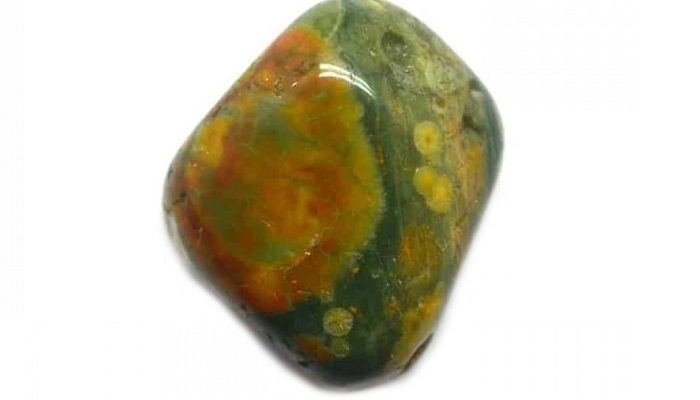 Rhyolites are counted among the igneous rocks that are formed above the surface of the earth. The formation takes place in two steps:

First, the formation of the first larger, rock-forming crystals takes place in the volcano as a result of the cooling of the molten rock during the transport towards the earth’s surface. In the subsequent eruption, the rock mass continues to cool rapidly, other minerals crystallize – especially so-called glasses (= amorphous, crystal-free rocks).

Volcanic glasses are considered a testimony to a particularly rapid cooling of rock melts: so fast that – as typical for glasses – no crystals can develop. In addition, cavities in the rhyolite indicate the nature of the lava, which in the case of rhyolite was rich in gas and viscous

Agate-like inclusions can be found as a greenish parent rock, light green to beige, with gray, brownish to reddish spots. You get the rhyolite as a rough stone, tumbled stone, flatterer, pendant, ball, chain, donuts and many imaginative shapes for choker and leather strap.

The rhyolite is supposed to connect the vegetative and the conscious nervous system. This should make us aware that we have not only physical but also mental needs and should harmonize them. Works well on all organs that are controlled by the autonomic nervous system. Digestion, heartbeat, glands, hormone production to be harmonized. Should be good for inflammation.

The rhyolite is a stone, which finds its attention only in the middle Ages and in our century. Rhyolite is today not only a coveted gem, but is also valued as a powerful healing stone.

This mineral represents change, variety and progress. It ignites the fire of creativity within the soul. It helps to strengthen both the mind and the body and to learn how to enjoy the vast potential within ourselves. Rhyolite is an excellent stone for meditation. It is the stone of resolution because it brings the unresolved to completeness.

This stone quickly brings awareness into the spiritual world, facilitating meditation and allowing an easier connection with the higher guides. It is a splendid healing stone that, with its water energy, facilitates the cleaning and release of emotions that have become stagnant at the auric level. It has the interesting effect of making one become aware of one’s spiritual situation, without however inducing it to change it.

It promotes respect and consideration for oneself, helping to accept oneself for what one is and exercising a balancing function on an emotional level. Rhyolite is useful in regressive therapy, it elaborates the past, integrating it with the present. Helps to dominate, in full awareness of their abilities, situations of particular stress and fatigue.

Strengthens stamina and activates the immune system. Useful in all skin disorders, veins, increases the absorption of group B vitamins. Increases muscle power. It can dissolve kidney stones and reduce tissue hardening. Improve memory. Protects against falsehoods. It attracts everything you need (a doctor, a drug, a new healing method, a book, etc.). It should be worn or positioned at the appropriate points; for regressive therapy it should be placed on the forehead; on the solar plexus instead for emotional release.

An idea to enhance its benefits and results is to use it in synergy with an appropriate supplement such as “Immuno complex”. From the historical company in the decoctions the innovative product for the winter defenses. The antioxidant action of Goji and Vitamin C, associated with the immunostimulant action of medicinal mushrooms and the protective immune system carried out by Zinc, makes this supplement useful for strengthening the body’s immune defenses, in the treatment of chronic or recurrent diseases and in the prevention of flu syndromes. 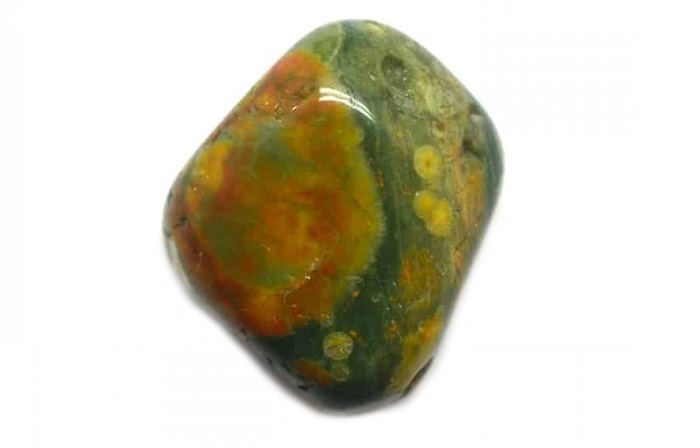 The name of rhyolite is the structure of the rock. Rhyolite is translated from Greek into flowing stone – based on the flow or fluid structure. The color of rhyolites is described as light to medium, varying from light brown to light gray, green and reddish, sometimes going to violet.

The reason for the color are the minerals involved in the construction of the rock. Microcrystalline quartz, volcanic glasses and alkali feldspar dominate in the rhyolite as the main mixed fraction; Because of the prevalence of quartz, rhyolite is therefore also referred to in the literature as quartz porphyry.

The secondary aggregates (= up to 5% of the composition of the rock involved) are biotite and hornblende, apatite and magnetite, which cause a porphyritic structure in the fine-grained rock matrix and facilitate the determination because of the conspicuity. That the grain size of the rock is mainly fine-grained, but it is interspersed with highly visible larger crystals – a structure that is referred to in geology as porphyritic; visually, the structure of rhyolite recalls concrete

As a variety of rhyolite the banded version is known. Characteristic of banded rhyolite are interlaced layers that arise as a result of various structures and colors of volcanic material. Accompanying occur feldspars and quartz needles. Significant occurrences of rhyolite are in locations that are or were characterized by volcanism, e.g. Iceland, Königsstuhl, Thuringian Forest, Harz, Erzgebirge, Odenwald / Germany; Bolzano / Italy; Rocky Mountains / USA; Vosges / France; Mexico; Brazil; Australia; India, Madagascar; Peru and New Zealand. In the US state of Nevada, the city Rhyolite was named after the rock occurring there.

The Rhyolite stone is a powerful stone that can help you retrieve more passion and romance in your life.

Rhyolite helps to make a deep introspective analysis. Use it if you want to understand yourself better, but know that in no way can it help you change some aspects of you. His job is to make you look, to make you aware of who you really are. It is formed through a primary lithogenetic process. It is an effusive rock, whose composition is similar to that of granites. In crystal therapy it is mainly used the green rhyolite while the white, gray, and red are much less common.

The name itself indicates its nature as an effusive rock. From the Greek rhyx which means lava flow. It is not among the most widely used stones in crystal therapy but still, it deserves a post of its own because some interesting property has it! As I said at the beginning of the article, rhyolite is a stone that helps to become aware of its hidden sides, but it cannot be used as a support to be able to modify them.

Rather, it helps you to accept yourself for what you are, bringing you to achieve a certain personal balance. Thanks to her you can detach yourself just enough from too intense emotions. It does not make you fall into the temptation to present yourself as a “victim” in a given situation.

The rhyolite use it if you tend to devalue yourself, to consider yourself less capable, less beautiful, less good … than all other people. It helps you to understand what your true value is and above all, to respect yourself.

Even if it does not change, this stone can be used under a slightly more practical perspective. Wearing it or putting it in an environment where you spend a lot of time, it helps you keep stress under control.

Rhyolite also acts physically. In general it makes it much more resistant, above all it goes to strengthen the immune system. Some varieties of rhyolite, such as the leopard skin (also called ocean jasper) for example, is indicated against dermatitis. That instead by eye, against infections and influences.

The Rhyolite stone doesn’t affect your wealth and it has no power in attracting money or prosperity, only positive energy.

No special zodiac assigned to this stone.

The rhyolite penetrates through the heart chakra with tendency to the throat balancing and evenly over the spinal cord into the nervous system. It activates the capacity for love and partnership and brings us to a higher level, which harmonizes our dealings with our feelings, but also with the feelings of our fellow human beings.

Rhyolite, therefore, acts like a rounding-off force, which makes it possible for us to marry and friendship, but at the same time helps us preserve our own personality in the stream of many people and opinions.

How to Purify Rhyolite Stone

The Rhyolite stone should be cleaned and discharged once a week under running lukewarm water. Chains should be detangled, so that the stones so not touch each other. This raises the power of rhyolite many times over. Dump chains once a month in a dry bowl of hematite tumbled stones.

Charging the rhyolite in the sun or a rock crystal group is recommended at any time, at least once a month.

Rhyolite helps to make a deep introspective analysis. Use it if you want to understand yourself better, but know that in no way can it help you change some aspects of you. His job is to make you look, to make you aware of who you really are. It is formed through a primary lithogenetic process. It is an effusive rock, whose composition is similar to that of granites.

In crystal therapy it is mainly used the green rhyolite while the white, gray, and red are much less common.

In order to recognize this stone it crystallizes in the trigonal system. It has no fluorescence, it belongs to the chalcedony. In ancient Greek, jasper means “variegated stone”. The leopard-like jasper, or rhyolite, or jasper of the humid forest, has inclusions in the shape of a leopard spot, which give the stone a wonderful appearance. It was a very popular stone in antiquity, it was used above all for beads of necklaces or for carved and carved objects, and was used as a talisman against the evil one.

It is a strong anti-stress, it comes into contact with the skin, and it helps to dominate physical and mental fatigue. It helps those with bulimia problems and weight problems, as it promotes respect and consideration for themselves. Strengthens stamina, can serve against apathy. It is particularly useful for those who suffer from a deep sense of suffocation and unjustified and sudden phobias.

This extraordinary jasper also promotes oxygenation of the blood and helps the tissues to regenerate.

The leopard-like jasper should be worn by those who do not have clear ideas about the choices to make for their existence. Like all jaspers, he has the power to help people find inner balance, in particular to follow his design, leads the person to have serenity and inner tranquility.

Those who suffer from negative thoughts must keep it in their hands for a few minutes and watch the play of its spots, and will gradually see their fixations disappear. Love for the unknown does not involve the person who takes this stone, but seeks certainty. When you have to write a letter or when you need to make an important call, you need to have it in hand, as it encourages meetings and messages.