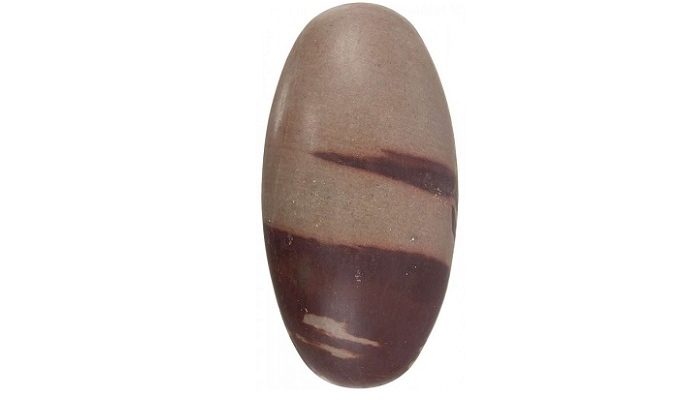 If your energy levels are low and you can not find the strength for daily life, then it’s time to consider getting a Shiva Lingam Stone. If you feel you have moved away from your loved ones and even yourself, Shiva Lingam is a stone to help you.

This stone has the power to get you back on track.

To know who Lord Shiva is, first we have to learn something about Hinduism.

Lord Shiva is the third god in the Hindu triumvirate. This triumvirate consists of three gods. They are responsible for the creation, upkeep and destruction of the world. Besides the Shiva, there are Vishnu and Brahma.

Vishnu is the guardian of the Universe and Brahma is the creator. Shiva needs to destroy the Universe to recreate it. Hindu believe that Shiva’s powers still destroy the imperfections and illusions of this world.

His ability to destroy and re-create makes the opportunity to change things for the sake of betterment and benefit. Shiva, as Hindu believes, destroys constructively, not arbitrarily. He is the source of both evil and good and combines the opposite within.

Shiva’s behaviour is extreme which is believed to be due to untamed passions. On one side he is a hedonist, on the other, he is an ascetic. Marriage with Parvati brought him to balance. In marriage, he can be both lover and ascetic (within marriage). When Shiva is presented as a human being, he has a blue throat and a face.

His whole body is white, however, in the pictures and presentations, he appears blue. Shiva has a Third Eye that represents wisdom and the ability to see everything. He holds his untamed energy in the Third Eye.

Since Shiva is one of the three supreme gods in Hinduism, the Shiva Lingam Stone is very significant. As a symbol of Shiva, it means the infinite power of the entire Universe. The Shiva Lingam Stone carries vitality. It is a stone that has pranic energy. Pranic energy is the energy that presents everything. In the practice of healing, Shiva Lingam has particular importance because this stone gives energy and revitalization.

Where you can find the Shiva Lingam Stone? 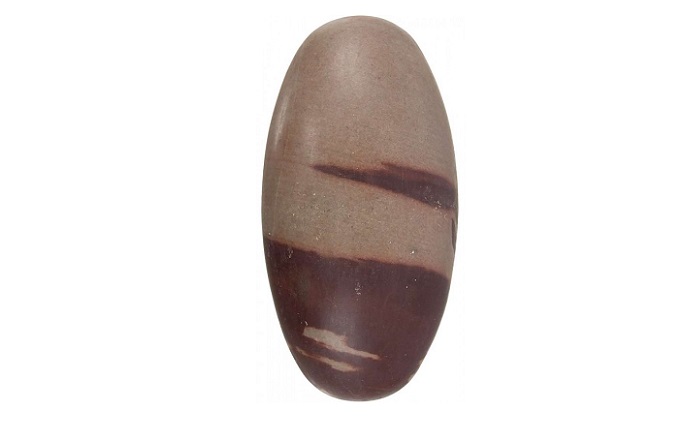 This stone is located in the Narmada River. Narmada River is a sacred river in India. Apart from this river, there are also Ganga, Yamuna, Sarasvati, Kshipra, Godavari and Kaveri rivers. All of them are sacred.

The Narmada river is holy river. It originates in Maikala at Amarkantak in the Madhya Prades area and flows southwest into Cambay Bay. It flows into the Arabian Sea. On the banks of this river, there is the largest temple dedicated to Lord Shiva. We can find this stone in the shape of an egg.

However, it is mostly polished and shaped to look like an egg for symbolic meaning. The egg represents the female and the male principle.

The stone colour is brown or light brown. Sometimes there are nice strip-shaped patterns over the surface. This stone is made of jasper. Jasper consists of chalcedony, opal and quartz. We know for very small stones that can be held in your hand as well as extremely large ones.

This stone is made of brown jasper. It provides protection and grounding the body and overall energy. Shiva Lingam can balance our emotional, mental and physical being, or the whole aura. It brings the balance of yin and yang energy. This stone protects. With the help of this stone, we can clean our environment from electromagnetic smog. It is often used to eliminate radiation as well as various pollutants.

People involved in finding water and springs can carry this stone. Shiva Lingam Stone brings courage to resolve conflicts and problems with determination. It helps us think faster, organize better, and turn ideas into action. In this way, we manage to fulfil our obligations.

When in a relationship, this stone can enhance a sense of intimacy and closeness. Shiva Lingam Stone provides support if you are suffering from a chronic illness or are hospitalized. This stone is great for all those who have problems with blood circulation, digestive tract and reproductive organs. It can balance the mineral content of our body.

Shiva Lingam Stone is associated with Earth. It helps us connect with our environment and raise awareness about ecology. Thanks to this stone, we can meditate deeply and discover the karmic causes of all the problems in our lives. Shiva Lingam strengthens the immune system and cleanses toxins from the body.

Unlike other stones that act on individual chakras, Shiva Lingam acts on all chakras equally. This stone can awaken kundalini energy. We can find Kundalini energy in the root chakra, at the base of the spine. The kundalini is wrapped seven times and runs upward. When we stimulate kundalini energy, the chakras gradually open and release through the crown chakra.

Thus we connect with consciousness and with the highest spiritual energy.

If we place a Shiva Lingam Stone on the Third Eye, between the eyebrows, in the centre, then we connect with our higher self and reinforce our psychic powers. Some healers believe that the Third Eye is where the pineal gland is.

The pineal gland is where the soul lives and the place where our thoughts originate. If we place a Shiva Lingam Stone on our throat chakra, then we connect with the etheric body. Around throat chakra is a subtle biomagnetic energy that surrounds our entire physical body which is known as an aura.

Setting a stone on the heart chakra will improve our sense of empathy and compassion for others around us. Shiva Lingam is a stone that symbolizes the unity of life and it helps us to connect with all people, especially those of whom we feel distant. With this stone, we will feel togetherness and ease of communication. Likewise, this stone can help us more easily to forgive people who have done us wrong.

As we can find this stone in the river, we can say it relates to water. Shiva Lingam Stone has water energy. It contains strength and peace and great energy.

The Shiva Lingam Stone is the sacred stone of the Hindu (India) religion. It will enhance vitality as well as the level of pranic energy. If you want to improve your health, buy this stone. This stone is strong and it stimulates the energy system of the body. Shiva Lingam stone improves your health and it will bring overall well-being.

The vibrations of this stone are different depending on where we place it. As we said before, these egg-shaped stones can only be found in one place. It is the Narmada River in western India. This place is one of the holiest places in the world of Hinduism.

People who live in this place (area= collect stones and manually polish them. When polished, the stones are smooth and rounded. The word „lingam“ is a Sanskrit word and denotes the symbol of Lord Shiva. The stones can be different in colours and shades, but each has a tan colour.

The Shiva Lingam Stones have different types of patterns across the surface. These patterns are in the form of stripes, dots or spots on the surface. Their colours are grey, red and brown. People who live in this area collect stones as an integral part of their religious rituals and these rituals have existed for hundreds of years. There are beautiful Shiva Lingam stones in temples in India that have a natural egg shape. These stones are especially sacred and have great value.

However, more stones do not appear in egg-shaped form but have to be polished manually and shaped to look like this.

What is the symbolism of the shape of Shiva Lingam stone?

Shiva Lingam stone is deliberately shaped like a phallus because this shape has a special meaning. It represents the phallus of the Hindu god Shiva and his union with Kali. The shape of this stone is also the shape of a cosmic egg that is believed to be the centre of Universal Creation.

Shiva Lingam stone combines feminine and masculine principles. It is believed that the first stone was made by the goddess Parvati in the glory of Lord Shiva. She wanted to show admiration and love for him.

Shiva Lingam stone is made of quartz. It also has impurities that originate from the river. This stone has very strong metaphysical properties precisely because it carries many different energies.

Shiva Lingam stone encourages you to see yourself in the true light. It teaches us that we are unique and inimitable beings. With the helo of Shiva Lingam stone, we come to awaken spiritual spheres of which we are not aware. The person who learns to use this stone soon realizes that is a part of the whole, but also that he/she is an independent individual.

The reason why this stone is so powerful lies in the fact that it contains the energy of all the centuries in which its worships lasts. The stone carries the energy that activates the kundalini energy and begins the awakening process.

Shiva Lingam for Love and Romance

Shiva Lingam Stone is the symbol of love. This stone opens the way for true love that brings unity. A person can make a real love affair when she/he has a good relationship with himself/herself.

Shiva Lingam stone is the patron saint of Scorpio. Its characteristics are balance, creativity and spirituality. Elements are water and earth. This stone is a combination of agate, jasper, chalcedony and quartzite, as well as many mineral impurities.

Some people believe that Shiva Lingam Stone belongs to all Zodiac signs. This stone can unite your sexuality with spirituality and make a balance in the entire chakra system. With this stone, you feel alive and connected, again.

Shiva Lingam Stone serves to connect with others. This stone teaches you how not to condemn others.

We will always see our partners as a wonderful and unique part of creation. With Shiva Lingam Stone we can connect with others on a deeper level and forge powerful relationships.

Shiva Lingam Stone helps us to remember that we are never alone. If our beloved ones are far away, this stone will help to feel that we are always connected with an unbreakable bond.

This stone is great for love affairs because it maintains a warm feeling in the heart and also a passion. The beautiful Shiva Lingam Stone from Narmada river is a sacred stone in Hindu culture for hundreds of years. It is traditionally used in temples and personal altars.

Only certain families are allowed to collect Shiva Lingam Stones from the river, once a year, when the river is low.

The colours and patterns on it depend on the presence of iron oxide. It is believed that a meteorite covered the river bed about 15 million years ago and that helped in creating the Shiva Lingam. 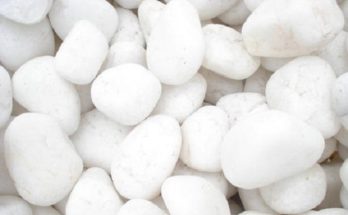