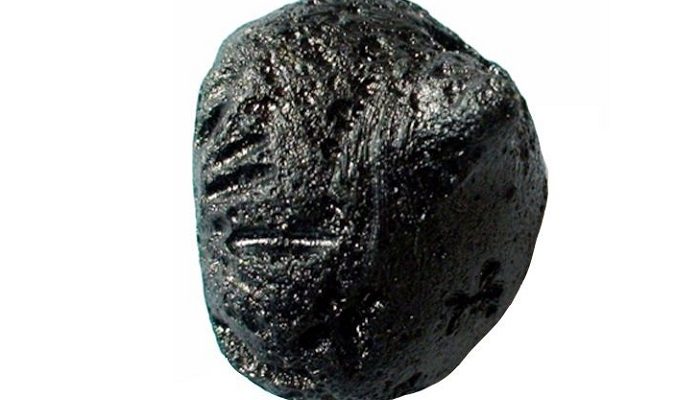 Today I am talking about a somewhat particular stone, known not so much for its properties but rather for its metamorphic glass nature. It comes from the solidification of the rocks of the earth’s crust, rocks that merged due to the impact with meteorites.

Also characteristic is the shape, almost always elongated, which looks like a drop. The tektite, some also written as tektite, is a beautiful deep black color.

Many consider it a meteorite but in reality it is a terrestrial rock melted due to the meteorite. It is therefore not a meteoritic fragment nor a lunar fragment. Tektite is a very good stone when there is a need to work on the material plane, because it increases physical energy by working directly with the root chakra.

Unlike other stones, such as hematite or black obsidian, it is not suitable for rooting but is good for purifying the lower chakras.

It is in tune with these energy centers, it is true, however it is also an excellent ally for the spiritual and mental plan. Strengthens the auric defense, helps in lucid dreams and also in astral travel. It allows you to connect with universal energy and with that of other people.

One of the reasons why it is so appreciated in crystal therapy is that it speeds up the healing process. It also allows us to loosen those bonds that keep us psychologically prisoners, with physical and emotional dependencies.

You can use tektite to work on your dreams. The shiny ones for example, that is the dream in which you are aware of dreaming. In this case I advise you to keep it near the bed or in the pillow case. If you are interested in astral travel, then hold one of these stones in your hands as you practice.

Tektite defends you, strengthens your aura and your energy. To take advantage of this benefit, wear a pendant or bracelet from this stone. Use it while practicing rooting. Work on the material plane through the first chakra. You can hold it in your hand or, if you practice sitting, directly positioned at the height of the chakra.

The low presence of water, only 0.005%, suggests how it was formed at very high temperatures and at a pressure not usually present on Earth.

Here, in fact, is the theory of a meteorite that, falling on the Earth, melted the surface, fragments of molten rocks moved hundreds of kilometers. After cooling, they then took on the vitreous structure.

The material, however, as the isotopic measurements have shown, is above all terrestrial. It can be found for example in Southeast Asia, but also in the Chesapeake Bay, in the USA. 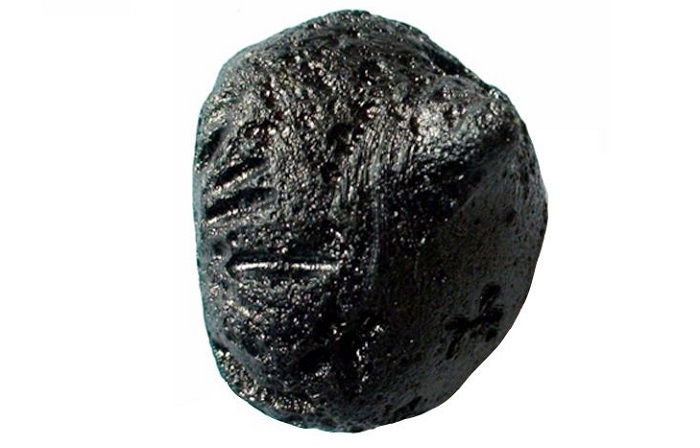 The name of the tektite comes from the Greek “tektos” and is translated “melted”. This is naturally formed glass, which was formed by the impact of a meteorite.

The impact of the meteorite generated such enormous energies that it compacted the struck rock under extreme pressures and heat, causing it to melt.

During the flight phase, the molten material cooled down, which then turned into natural glass. Naturally produced natural glasses are commonly referred to as tektite.

Depending on the location, they also get their own names such as Libyan Desert glass and moldavite. Tektite has been used as a commodity for thousands of years and used as jewelry or for ritual purposes.

Tektite is a glass of terrestrial origin created under the influence of meteorites. The color of tektites varies between yellow-brown, green, green-black and black.

The composition of tektites is acidic: it contains silicon dioxide as well as potassium, calcium, aluminum and iron oxides. The water content in tektites is very low at less than 0.02 percent.

A striking feature of tektites is the surface, which can be smooth, jagged and scarred or interspersed with many voids. The transparency of tektites is translucent to opaque. The shape of tektites is diverse, are possible elongated, drop-like, button, disc or egg-shaped.

Like all glasses, tektites are amorphous and have no crystallization. The Mohs hardness of tektites is 5.5 at a density of 2.32 to 2.38 g / cm3.

The Tektite should strengthen environmental awareness and awareness of nature.

He also helps to deal more profoundly and emotionally with the feelings of other people. He is known for cementing friendships and protecting against disputes. In men, the Tektite healing stone increases concentration and keeps the rule of domination in check.

In addition, he also reduces the false jealousy, the quarrelsome and the rudeness. Feeling cold, people get a new chance through the Tektite effect.

In general, healing processes are promoted by the tacit. The causes of the diseases are made aware. Especially with infectious diseases, the tacit is very helpful. However, as with other healing stones, going to the doctor for illnesses is necessary.

Tektites are available as they fell from the sky, that is, as jet-black, roundish aggregates. The price range is upscale, as are Moldavite and meteorites.

Tektites, like meteorites, are bundles of energy that, under the toughest conditions, have made their way through space and time to Earth, covering many millions of light-years. There are meteorites and tektites that are older than all life on earth and the earth itself.

If you are offered a tektite and have sympathy for it, you can also dig a little deeper, because such a friend will probably never run into you again, and his services are hard to beat in money.

Tektites are amorphous and are found in round, sometimes irregular or teardrop-shaped pieces that are rarely larger than 7 to 10 cm. They are usually dark to black and show gloss of glass; only Georgianite is bright olive green and Queenstown (Darwin glass) appears through many enclosed glass bubbles sometimes frothy-white. The surface of the Tektite is rarely uniformly round, but usually scarred to deeply furrowed and sometimes corroded.

Similar to the meteorite, the tektite also strengthens the awareness of the environment and nature. It helps us to better understand people and allows us to understand their feelings in a more understanding and profound way. It strengthens friendships and protects its wearer from the frequent trivial disputes in everyday life.

Emotionally cold and hypocritical people get a new chance in their relationship with friends and partners. People who are often on the road and have difficulty falling asleep in foreign beds should carry a tektite as a sleeping bag.

The Tektite should be used for meditation if there are physical or mental dislocations. Put it on the spot where you feel pain or even suspect a cancerous growth. The Tektite is a stone without compromise due to its invariably black color in lithotherapy. Like the Yin and the Yang or the plus and the minus, he is a contrast stone from the beginning.

Tektites generally promote healing processes by making disease causes and gains more aware, and especially help with infectious diseases. Tektites have a strong impact on the forehead, but can also be worn as a pendant or carried as a rough stone in a trouser pocket.

Tektite strengthens awareness and promotes self-knowledge. It increases the empathy and brings more understanding of the personal environment, which also results in a closer relationship. In addition, Tektite inspires new ideas, attracts more attention and provides enthusiasm and spontaneity.

However, this healing stone calms the mind and frees from depression, aggressiveness, fears, jealousy or schematic thinking. Tektite can improve sleep and help with insomnia when placed under the pillow.

An assignment as a partner of the zodiac is rather uncommon for the Tektite. The assignment of gemstones to zodiac signs in horoscopes always causes confusion, since many a gemstone in which a horoscope is assigned to a certain zodiac, but is not assigned to the corresponding zodiac sign in another horoscope.

Especially the Aborigines of Australia appreciate this stone even today as a defense against black magic and evil spirits. The Aborigines keep the Tektite together with their amulet stones and consider themselves invulnerable with this treasure “Tektite rich country give a rich harvest and protect all his living beings from diseases and epidemics”.

The Tektite should be used for meditation if there are physical or mental dislocations. Put it on the spot where you feel pain or even suspect a cancerous growth. The Tektite is a stone without compromise due to its invariably black color in lithotherapy.

Like the Yin and the Yang or the plus and the minus, he is a contrast stone from the beginning. You should therefore make sure in the therapy that you give the tacit a counterpoint.

Depending on what you demand of the tektite, we recommend balancing stones such as. B white agate, magnesite, milk opal or pearls. Under heavy load (Aids, radiation exposure), we strongly advise you to an antipole of at least one hand-sized moonstone. Please keep this in mind and always put the opposite poles on your root chakra.

However, if you want the therapy through this chakra, place the opposite poles on the solar plexus.

How to Purify Tektite

Tektites are bodybuilders who want to be lovingly treated. It is suffice to clean the tektite once a year under running, lukewarm water.

Keep the tektites together with a counter stone (moonstone, white agate, milk opal).

Tektites are roundish and black aggregates and are in the shape of how they fell from the sky. A tektite has a very long way to go. They are enormous bundles of energy and have paved the way to Earth.

The tektites are very old. Some are even older than the earth itself. Normally, these stones are between seven and ten centimeters in size. They are very dark and mostly black.

They also bring a gloss of glass with them.

Tektite healing stone is in the rarest cases round. Mostly they are deeply furrowed and scarred. This healing stone is not assigned a special zodiac sign. A tektite is a very good bodybuilder and should be lovingly treated.

Once a year, you can clean it under running water. The tektite should be kept together with a counter-stone, such as a moonstone or a milk opal.

The Tektite should be used for meditation if there are physical or mental dislocations. Put it on the spot where you feel pain or even suspect a cancerous growth.

The Tektite is a stone without compromise due to its invariably black color in lithotherapy. Like the Yin and the Yang or the plus and the minus, he is a contrast stone in its core.